We get behind the wheel of India's first mid-engined sportscar and come out mighty impressed. Read on to know more! 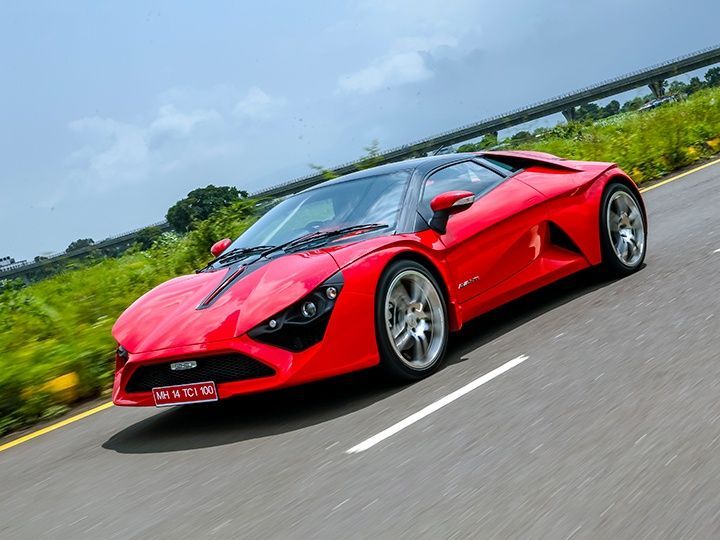 The DC Avanti is a car that has been under development for a long time. In fact ZigWheels was the first publication in India to drive the car back in 2012 when it was a very basic prototype and had quite a few good things to say about it. Now though, DC has officially started delivering cars to its customers and we finally get to have a go at one. I personally have waited for a really long time to get behind the wheel of this car, mainly because of the fact that you can easily be surprised at the level of potential some small automobile manufacturers can bring to the table. Of course, this isn’t the first sports car to be indigenously built in India (that would be the San Storm which was available in the late 90s), but it is the first mid-engined sportscar that an Indian automobile manufacturer has built.

So first things first, the Avanti, which incidentally means ‘forward’ in Italian is very apt for this car. Why? Well, for starters, the Avanti’s bodywork is built completely out of carbonfibre just like a Lamborghini Aventador! And as much as we agree that the way it looks is more of an acquired taste, the Avanti is certainly a very striking car. The front for example is extremely aggressive with a large air dam with an inset mesh grille. The car that we drove had a set of simple headlamps with independent units for the actual headlamp, the parking light and the indicators which did look very unappealing. However, there is another version of the car that has a single unit with a set of projectors and an LED daytime running light.

Continuing on the design however, the Avanti is a sheer showcase of design elements with a flowing shoulder line that splits right through the center and two large air scoops to cool the rear mounted engine. We also like the styling element on the hood and of course the louvered engine cover that reminds us of the likes of the poster-worthy supercars of the seventies and eighties. The rear design does look a little overdone and a little droopier than it should have been, but as a first time effort to build a car out of scratch, it is commendable.

That said, for the future, DC should remember to have a shorter tail that ends slightly abruptly, inspired from the likes of the Ferrari 250 GTO perhaps. Just like the headlamps, the tail lamps in the car that we drove are not the ones that will come in the production version, which incidentally will get LED festooned one piece lamps. We also like the fact that the Avanti gets a set of buttresses, which personally is a design feature that I adore. The wheels too are an improvement over the ones we saw at the Auto Expo in 2014 and are in a machined aluminum finish.

Sportscars don’t just have to be a nice to look at but also a nice and frankly special place to be in considering the fact that they do cost a lot more than your average family sedan. On the whole, the DC Avanti is a pretty interesting place to be in with obvious references to more contemporary supercars of our time.

We do like the sporty seats that hold you snugly, but the car we drove did have some general issues with the way the upholstery draped the seat foam. Of course, DC does offer you a whole range of interior options, from leather carpets to alcantara seats and headliner.

And if you are seriously considering buying an Avanti we strongly advice you to spec the interior in a more personal sense and not just stick to the standard stuff. We also like the chunky and simple three spoke steering wheel and the large digital instrument console.

The user interface of the console though does need some ironing out to make it a lot more simple and a little less flashy. Other than that, as obvious, one cannot expect Bentley levels of quality and there are several obvious places where an improvement in quality would be appreciated.

It isn’t really that hard to make a good looking car. But a car that performs as well as it looks, well, that’s a whole different ballgame. So lets get to the figures first then. The DC Avanti is mid-engined like the Ferrari 458 and is equipped with a turbocharged 2.0-litre, 4-cylinder engine that makes a modest 250PS of peak power and 340Nm of peak torque. And with a kerb weight of only about 1500kgs, 250PS is adequate enough for the first time sportscar buyer. So how does it compare to its peers? Well, for starters, it feels raw and mechanical like a proper old school sportscar.

In fact, it feels quite similar to some of the stripped out racing sedans that we have had the chance to drive in the last few months. What I also like particularly is the fact that it comes with three pedals and a proper manual gearbox. That said, the car we drove did have a minor issue in the synchromesh for the first gear, but that is not much of an issue and could easily be sorted.

The throttle pedal does however feel uncannily heavy but we wonder if it has been weighed up on purpose to make sure no heavy footed amateurs get themselves in trouble. All said and done, the DC Avanti does have a lot of poke and does really move swiftly when you need it to while still seemingly having a lot more to offer from its turbocharged engine. So what would be improve on immediately? Well, for starters, since the engine already has an inbuilt blow off valve for the turbo, a slightly louder and more aggressive one would definitely improve the aural experience and so would a much needed sports exhaust. The Avanti in its current state is just way too quiet to match its loud exterior.

Peel back the body panels of the DC Avanti and what you have inside is a space frame chassis on which the suspension components, engine, gearbox and of course body panels are mounted. Being a space frame also has its immediate advantages of providing a much stiffer overall structure. Now small time sportscar manufacturers have been known to set their cars up in a way more inclined towards the hardcore drivers who do not really are about comfort much.

The DC Avanti however, thankfully so, is not that stiff. Yes, there is still a degree of stiffness that exceeds the likes of most modern sportscars, but then the Avanti does seem to have something really going for it in this department. Although it does feel a little crashy over potholes, the overall ride is actually quite good and does not punish you for driving over a pebble.

Handling too is well sorted with the steering feeling quite direct with great feedback but there is slight delay in the steering sometimes, which we guess these teething issues can be easily sorted. The DC Avanti is also really confidence inspiring when you want to chug it through a corner and kick the tail out. And mind you, even with the 295 section Pirelli P-Zero tyres, the tail does tend to kick out in a very controlled and almost non-scary way which helps in making the Avanti and easy yet excitable car to drive.

So how is the DC Avanti as a package? Well, as we have mentioned earlier, it would be unkind to compare it to an established sportscar manufacturer as this is DC’s first attempt to make a car out of scratch. What the Avanti does showcase in dollops though is potential. From the carbon body to the overall engineering that has been showcased, the Avanti is certainly worth an applause. And although we might still take a while to get used to its styling there is no denying the fact that the Avanti attracts a boatload of attention.

So what is the next step? Well, its simple. The next car from DC needs to be a smaller 4-cylinder turbocharged engine with the styling dialed down a little but still dramatic enough to give the middle class something to aspire for. And of course, it needs to be priced really really competitively. All of this is wishful thinking though is for the future. As of now though, should you buy the Avanti? Well, if you have some money lying around and want something exciting on the weekend that grabs the eyeballs like nothing else in its price range, then the DC Avanti is the car for you.