Audi is calling the A5 siblings the Brat Pack. We drive the S5 to see just how loud and boisterous this star kid from Ingolstadt really is 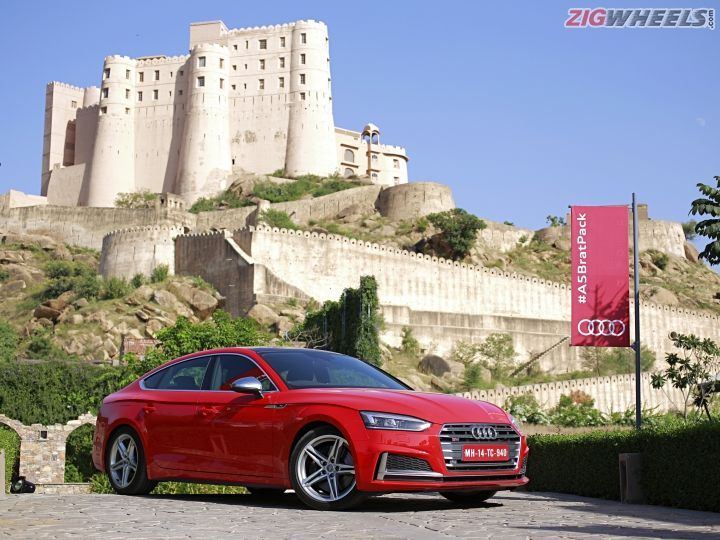 Naughty Or Nice?
A bratty car? Sounds refreshing and exciting, right? Usually I wouldn’t think of luxury cars as bratty machines. Sophisticated? Sure. Menacing? Some. Rapid? Yeah. Could the new generation of the A5 family have changed that much? We’re spending some time with the S5 Sportback with the turbocharged V6 petrol. So let’s poke around and see if the coupe’d design, the hot badges and the new hardware have imparted it some newfound naughtiness.

We slipped out of the chaos of Jaipur’s roads onto the highway to Delhi, and still there was no respite from dogged commuting. All this time the V6 turbo-petrol engine has been biding its time a bit irritably. We turn off the highway and find some abandoned roads. The well-mannered boom from the sport exhaust has been itching to roar, while the Quattro all-wheel drive system has been waiting to get its claws out. Finally, we find an abandoned road to nowhere, and get a chance to test it all.

With the Dynamic mode selected and traction control set to Sport, I punched the right foot down. With the loud pedal - a mix of handsomely crafted rubber and aluminium - pressed firmly into the floor, a loud bassy exhaust note filled the air.The rev needle sweeps past 2000rpm and the scenery is whizzing past at a properly racy pace.  Audi aficionados would have immediately picked on two key changes: first, the engine is now turbocharged, not supercharged.

The new unit makes some 20PS more power, more torque, and that too earlier in the rev range. Audi claims the weight to have also gone down by 30kgs. So, no surprises that the company-claimed 0-100kmph time has been slashed by 0.4 seconds. The road stretches ahead and thanks to the emptiness it’s a great chance to let the S5’s motor, well, roar. The turbo engine lays down a thick and creamy layer of torque from just under 2000rpm, faltering only slightly before heading up to the 6500rpm limiter. The exhaust note now mimics a tin-top racer, it booms, doesnt shriek and crackle.  The volume and intensity is dialled down so that it doesn’t get tiresome after a few hours.

Brrrrmm. There’s a mild but enjoyable flutter from the exhaust as the 8-speed gearbox shifts up. That is the second big change. The S5 doesn’t use a dual-clutch transmission, instead opting for an 8-speed planetary gearbox. This, in the time spent with the S5, proved to be a stumbling block, although thankfully, not a deal breaker. The gearbox finds itself in its comfort zone when cruising on the highway, shifting up and down without a hiccup. However, when driven with more urgency either on an empty road or in erratic city traffic, the gearbox feels clunky.

In the Comfort or Efficiency settings the gearbox is all too eager to shift up, and it takes some prodding of the accelerator to get the turbo motor to hurry things up. And then, everything happens in a rush, the gearbox shifts down, the engine revs up and makes the going a bit ragged. The turbo engine deserves part of the blame as throttle response feels a bit disjointed and that makes changing pace a less intuitive and intimate experience than what I would have hoped for. The Efficiency or Comfort modes make the going more laidback, but does little to fix the problem.

There is a quick patch to tide things over: Sport Mode. Pull the yacht-style gear lever back once more and the gearbox becomes more alert. As it holds a gear longer, even light dabs of the throttle result in a greater sense of oneness between driver and machine. Satisfaction delivered? Well, almost.

There’s a mild left header up ahead. I keep the foot down, counting on the Quattro all-wheel drive system to handle the moment. It does. In Dynamic mode the steering is a bit heavier in my hands. As I turn the steering wheel the S5’s nose tracks in precisely, but there’s no sense of connection to the front wheels. A common lament with all-wheel drive machines.

A mid-corner bump tries to the test the S5’s composure, but it is in vain. The  all-round independent suspension used on the S5 is of a simple but sporty variety. Even though there’s no electronic trickery here, it is surprisingly good at all kinds of paces. Through the city commute we had little reason to complain and there was no looseness at highway speeds either. While a more sophisticated adaptive suspension is available as an option, the standard setup leaves no reason to complain. The 40 per cent profile of the Pirellis made no difference over broken roads.

The S5 runs through the turn as if it were on rails.  As the road wandered over the rolling terrain, a dip appeared suddenly. The brakes felt strong and crisp in the city and didn’t disappoint here either.

You must. The legendary aspect about the S5 has to be its gently waving shoulder line. That crisp but gentle line as it sweeps from the front wheel to the rear is pure art. For the new generation S5 the line has become even more crisp, which requires some really precise manufacturing techniques!  The gorgeous 18-inch wheels look strong and sophisticated at the same time. The coupe-like roofline and the stretch between the wheels makes the S5 look long and low. The proportions have changed slightly to emphasise this look. The new generation S5 is 34mm longer and has a 14mm longer wheelbase than before. But it is 11mm narrower and 5mm shorter than before.. Bit it is 11mm narrower and 5mm shorter than before. End result is that it looks low and a bit impractical, but we were surprised to find that none of the speed breakers that we encountered could fulfill their threat of pawing the S5’s belly.

Start from the front, like most people would, and you’ll notice that the S5 has a new robotic-being kind of look. The new 3D design for the grille, the quad-eye treatment for the headlamps and the more technical aesthetic for the face are prominent and eye catching too.

The tail lamps are sharply cut and sit in a beautifully layered rear section. The roof line flows fast into a stubby boot. The integrated spoiler lip also gets a small deflector and this adds to the technical look of the A5. This is most definitely a very attractive machine.

Seated at the front you would be hard pressed to make this out from the A4. Don’t gasp -- they share a lot under the skin too. The horizontal dash design, the minimalist centre console, the touch sensitive buttons for the MMI and the air-con and the high quality of materials used, make this cabin familiar, but sophisticated and pleasing. The well-bolstered front seats and the  flat-bottomed steering wheel would be the few indulgences of the S5.

As is, you can’t help but admire the cabin. Small design touches like the partly open stowage area under the driver’s armrest are particularly ergonomic and thoughtful. A flat-bottomed steering wheel for the S5 would be a super touch, however, it was missing on our test car. In terms of equipment you get everything you would need, from Audi’s MMI with touch pad, smartphone connectivity, a panoramic sunroof, a 19-speaker music system from Bang & Olufsen and a 3-zone climate control system. The piece-de resistance is the Audi ‘virtual cockpit’ -- the 12.3-inch screen that doubles up as the driver’s customisable instrument cluster is a delight.

There are a few shortcomings though. The resolution for the reversing camera is disappointing and the central screen isn’t a touch-sensitive unit and feels a bit small too. The positioning of the Audi Drive Select switches at the far end of the centre console required me to stretch for them.

For all the posturing, the S5 isn’t a brat outright. It isn’t an out and out driver’s car either. The somewhat vague throttle and distant steering make sure of that. The gearbox grumbles, although annoying at first, can quickly be worked around. So it misses a bit of magic, but it is still a very likeable car. As expected from Audis, the S5 is an elegant, comfortable and rapid machine. So, if you are looking for a capable companion with a bit of a wild side for your long journeys, the S5’s mixture of naughty and nice will seem just right.