The utilitarian Xylo gets a slight refresh and an updated interior. We find out what's new. 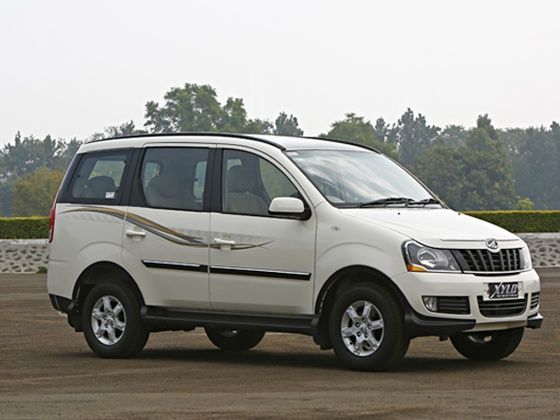 The facelifted Mahindra Xylo was introduced in 2012 and saw some rather interesting changes made to both its exterior and interior. Although true to its multi utility tag, the Xylo’s sales have been slumping in recent times. Mahindra has now launched a slightly updated and more premium looking version of the Xylo to appeal to both the individual and fleet buyer.

Although the Xylo has essentially been left unchanged, there are a few details that are new. For instance, the Xylo now has a new chrome garnish strip on the bonnet just above the grille that cuts across the prominent Mahindra badge and goes well with the bonnet lines on the car. The same chrome treatment has been extended to the rear too with a chrome strip running across the tailgate. The new Xylo also features a new side decal that runs across the car. Although we are not a big fan of sticker jobs, they seem to be something that works well with Indian audiences.

The Indian market also has a certain soft spot for beige interiors. Although the Xylo already came with a beige interior with a wood lookalike inlay in the dashboard and on the centre console, the new Xylo has been updated to look more premium that ever before. For starters, the plastic panels have now been updated and come in a shade of black as opposed to the generic brown one offered earlier. Not only does this make the interior of the Xylo look more mature and luxurious than ever before, it has also helped decrease to overall clutter on the inside.

The Mahindra Xylo has always been quite spacious and the new one continues that trend. The driver now gets a height adjustable seat that highly improves the driving position and comfort. The Xylo is available in a combination of seating configurations, with the entry level variants getting a bench seat setup. The higher H8 and H9 variants get a captain seat configuration centre row. The first and second row of seats also comes with a set of flip down hand rests that helps with the added comfort. The Xylo also gets a new perforated seat fabric that is much softer that before and also adds to the overall appeal to the spacious Xylo. The top of the line H9 version also gets leather interiors.

Mahindra cars in recent times have been quite heavily crammed with technology that equipment. Similarly, the Xylo comes with a long equipment list on the top of the line H9 model. The biggest addition to the new Xylo is cruise control. Apart from that, the Xylo also now comes with follow-me-home headlamps. Other features such as a Bluetooth enabled infotainment system has changed pretty much unchanged. The Xylo also comes with other features such as electronically adjustable ORVMs but still lacks climate control.

Ride and ease of driving:  rating_3.0_rating

Mechanically, Mahindra has concentrated primarily on the suspension setup of the new Xylo. And this is evident from the second you drive the car over bumpy surfaces. The new car is much more composed and definitely more comfortable than before. This is mainly due to the addition of polyurethane bushes in the suspension mounting points. The Xylo also gets a new set of polyurethane bump stoppers over the rear axle which are designed to take loads and impacts when the rear of the car dips. Apart from that, the new car also gets new shock absorbers that are more pliant. The higher variants of the Xylo also get a wider 205 section tyre.

The Xylo is aimed at a large plethora of buyers and the engine options are accordingly offered. With distinct demarcations in markets, the bottom end D2 and D4 variants are powered by a 2.5-litre mDI CRDe oil burner churning out 94PS of power. These are of course aimed at the fleet buyer who is looking for a bulletproof vehicle to ferry 7-8 people and luggage across long distances at relative comfort.

The H4 and H8 variants that used to get the 2.5-litre mEagle powerplant which used to also be the flagship of the old Xylo range has now been discontinued completely. Instead, the H4, H8 and flagship H9 models get the 2.2-litre CRDe engine from the Scorpio with 120PS of peak power and 280Nm of peak toque. The 5-speed gearbox from the Scorpio too has made its way into the Xylo, making it a much better vehicle to drive in general.

As we mentioned earlier, the Xylo gets new stiffer bushes in the suspension and a set of new shock absorbers making it a much more composed car in terms of handling dynamics. That though is not the biggest change in terms of the new Mahindra Xylo’s suspension construction. The new Xylo also comes with a rear axle stabilizer bar that was absent in the previous versions. This drastically reduces the waywardness that the Xylo was known for while at the same time cutting down on both roll and pitch. In short, the new Xylo is a much more composed car than before and handles with a certain finesse that it was lacking earlier.

The Xylo’s brakes have also seemed to slightly improved over previous generations. The higher powered versions also come with slightly wider 215/75 R15 wheels and tyres as compared to 205/65 R15 tyres that the D2 and D4 variants come with.

Starting at Rs 7.73 lakh, the Mahindra Xylo is more expensive that the hot selling Maruti Ertiga that starts at Rs 7.23 lakh (diesel) but cheaper than the Honda Mobilio which starts at Rs 7.89 lakh. That said, the Xylo is much bigger than either of the above and is aimed more at the likes of the Toyota Innova which is prices at 10.21 lakh. The Xylo also isn’t as frugal as its competition returning only 14.02kmpl compared to the Ertiga Diesel’s 20.77kmpl and the Honda Mobilio’s 24.2kmpl but is more efficient than the Innova’s 12.99kmpl.

The verdict on the Xylo is simple. It is as versatile as a Swiss army knife and as bulletproof as one too. It might not have the finesse and road manners of its competition but the new suspension setup has certainly made it a much more liveable car than it ever was. And of course, it is cavernous on the inside offering more space than just about anything else in its class and price range. That said, our favourite still remains the near-flat bed folding seating and the fold-away snack trays. Priced between Rs 7.73 lakh and Rs 10.93 lakh, the Xylo is certainly a car you should take a second look at if you are in the market for a comfortable seven seater.