This is by far the most radical looking, more off-road focussed KTM 390 Adventure 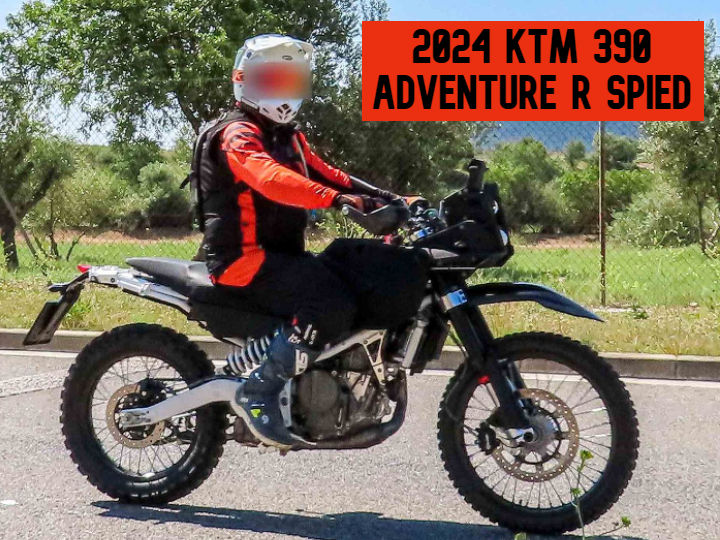 A revamp is underway for KTM's Adventure series, as latest spy shots emerging from Europe reveal a prototype of the 390 Adventure, which was spotted on test. From what we can see, it now bears close resemblance to its bigger siblings.

Built on a completely new platform, the prototype is likely the next-generation KTM 390 Adventure R. It gets a tweaked trellis frame and a new sleek rear subframe. One major update is a new swingarm that hasn’t been seen on previous prototype models. The boomerang shape helps increase ground clearance substantially, possibly a solution to an issue that is prevalent in KTM’s Euro5/BS6 bikes due to the rerouted exhaust.

Underpinnings on this prototype include the trusted WP USDs at the front, and the offset monoshock at the rear looks similar to the one on the 2023 KTM 390 Duke. The bike sits on what looks like a 21-inch D.I.D DirtStar rims at the front and 18-inch wire-spoked wheels on the rear that are wrapped with off-road tyres, indicating that this prototype could be a lot more capable than the current generation ADV. Also spotted were new rotors coupled with an axial caliper, that’s completely different from any of the current bikes.

A closer look at the engine reveals a new casing, similar to the one spotted on the 2023 Duke 390. The engine is also repositioned and it is expected to be more refined while also getting new riding modes. Power and torque figures are likely to remain the same as the current model at 43.5PS and 37Nm. The instrument console on the prototype looks the same as the TFT display currently present on the 390 Adventure. While the prototype isn’t fitted with all its body panels, the overall design language of the bike looks very similar to the KTM 450 Rally Factory Replica.

Also expected would be a touring-friendly 390 Adventure built on the same platform and equipped with more road focused hardware. The finish seen on the prototype suggests that it is past its R&D stage, and hence we could see the production version of this bike at the 2023 EICMA in Milan followed by an early 2024 launch.

Prices are expected to be around the Rs 3.90 lakh range (taking inflation into consideration) by the time the bike makes its way to India, since the current KTM 390 Adventure is priced at Rs 3,34,895 (ex-showroom Delhi). Its main rivals would be the upcoming Hero Rally 450 and Himalayan 450. The latter was spied on test multiple times and the latest spy shots have revealed quite a few new details, which you can check out here.