Here’s A Look At The Upcoming Electrified Tigor Facelift Undisguised! 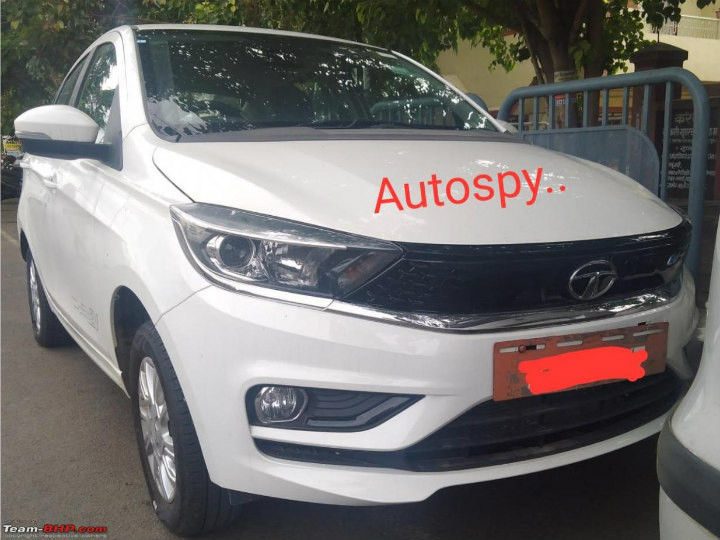 Back in March this year, the facelifted version of the Tata Tigor EV was spotted testing for the first time sporting camouflage. And now, the updated EV has been spotted once again. This time it is completely undisguised and was sporting similar bits to its internal combustion engine counterpart.

Similar bits on the outside include a new bumper, a revised grille as well as new headlamps that resemble the Altroz hatchback. The Tigor EV pictured here doesn’t sport LED DRLs nor alloy wheels from the standard Tigor, which suggest the prototype is a mid-spec variant. There are bits that differentiate the Tigor EV from the standard counterpart like a blue strip on the boot lid and the EV badges indicating the EV identification.

Interior shots reveal the Tigor EV facelift will carry over bits from the standard model. Some of them include the Altroz’ sleek three-spoke steering wheel as well as dark interior colour scheme. It is also expected to feature other upgrades such as an updated touchscreen infotainment system with Android Auto and Apple CarPlay.  Equipment like a Harman sound system,  multi-info display, climate control, dual airbags, ABS + EBD and rear parking sensors are likely to be retained.

Under the hood, the updated Tigor EV is likely to be powered by the same electric powertrain as its predecessor. It currently delivers 41PS of power and 105Nm of torque which is then juiced up by a 21.5kWh battery pack that offers a claimed range of 213km.

It is likely that the Tata Tigor EV facelift will launch later this year at a premium over the current model that retails from Rs 12.59 lakh (ex-showroom, Delhi) onwards. Once launched, it will take on the likes of the Mahindra e-Verito in the Indian market.