Going by Honda’s price tag, it should be, right? 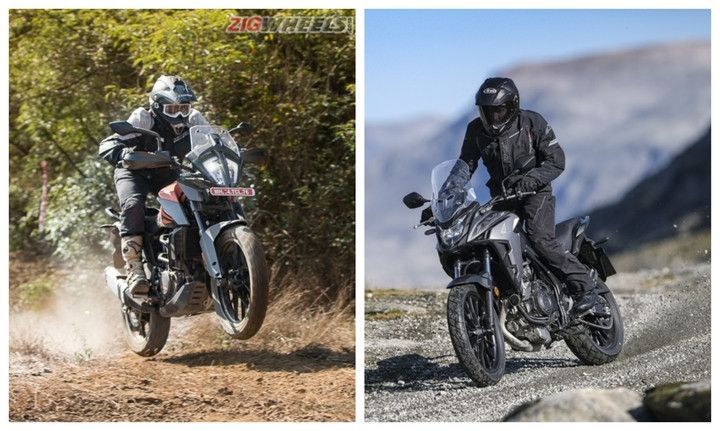 Earlier this week, Honda launched the much-awaited CB500X, but with a price tag that shattered everyone’s hopes. We pit it against its rivals, the Benelli TRK 502 and the Kawasaki Versys 650, to see if the Honda is worth the splurge. But what if you aren’t looking for something as powerful as the Versys or as hefty as the TRK? Before the Honda came in, the KTM 390 Adventure was your best bet. But is the CB really twice the ADV (at least that’s what the price tag says) compared to the KTM? Time to find out.

The Honda takes the cake here. With one extra cylinder and more cubic capacity, the CB500X not only packs more performance but also delivers it sooner than the KTM. The twin-cylinder configuration should also translate to more refinement than the KTM’s single-cylinder mill. Thankfully, both bikes come with a slipper clutch. That said, the KTM should make up for the slightly low performance figures with its lightweight construction. The additional torque should make the Japanese bike easier to ride at low speeds and also hold triple-digit speeds on the highway.

Even though the India-spec 390 Adventure doesn’t get an adjustable fork like the international model, it still outshines the Honda. The beefy 43mm WP USDs offer 20mm more travel than the Honda. Even the rear monoshock of the KTM offers an additional 40mm of travel. Considering these bikes are designed to handle some rough-roading too, more suspension travel is always welcome.

When it comes to braking, the KTM should be better at shedding speeds thanks to the bigger front disc. Another advantage Team Orange enjoys over Team Red is the switchable ABS. With something meant to go off the beaten path, you wouldn’t want electronics coming in your way, right?

Both bikes come with a 19/17-inch wheel setup, which is friendly off the tarmac, however, the (comparatively) skinny tyres on KTM should make it easier to get out of tricky situations.

The Austrian beats the Japanese ADV in this aspect as well. Complementing its underpinnings is the taut wheelbase of 1,430mm, which should make it easier to flick around. Factor in the 20kg weight difference and 20mm more ground clearance and the KTM feels more capable, on and off the tarmac.

Though both bikes have tall saddles, the Honda’s 830mm seat height is slightly more manageable for shorter riders, compared to the 855mm on the 390 Adventure. The CB also stores an additional 3.2-litre of fuel offering more range, something necessary for mile munchers like these.

Despite costing twice as much as the KTM 390 Adventure, the Honda CB500X barely has features to brag of. Apart from the dual-channel ABS, the Honda ADV is pretty much barebones. The KTM, on the other hand, offers traction control and a quickshifter, which is a bit rudimentary, but nonetheless, a good feature to have. Also, since these bikes are meant to go the distance, the KTM comes equipped with goodies such as navigation and Bluetooth connectivity for its TFT display as well as a 12v charging socket. Not just that, KTM also offers knuckle guards and engine protection guards, while the Honda misses out on something as basic as a standard bash plate.

Though the Honda gets a bigger engine and has more performance than the KTM, it is completely overshadowed by the Austrian ADV in every other aspect. We rode the CB500X a couple of years back in Malaysia and came back thoroughly impressed, but the almost Rs 7 lakh price tag is a slap in the face of people seeking a value-for-money proposition. It is not just the purchase cost, but the subsequent maintenance and spare part replacement prices that are likely to be more than the KTM 390 Adventure. So, if you are on the lookout for a lightweight adventure tourer, which is (relatively) easy on the pocket, the 390 Adventure makes better sense.