Ather, Twenty Two Motors and Okinawa are some of the youngest companies leading the charge towards electric mobility. Here’s how their eclectic scooters stack up against each other on paper 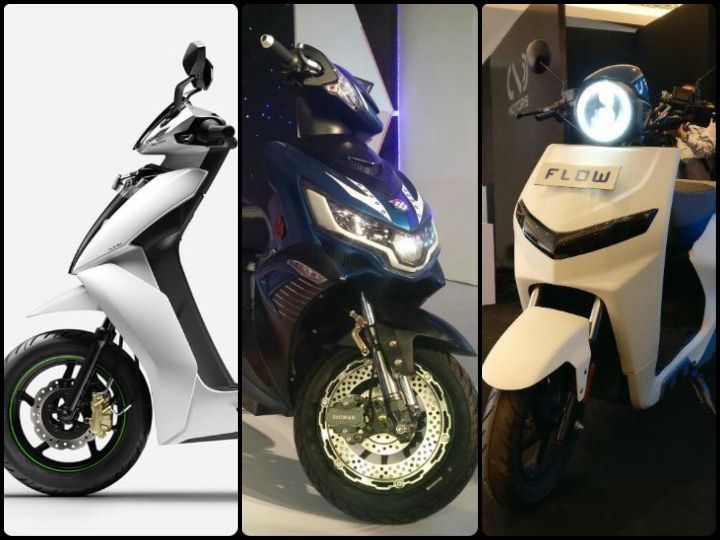 As they say, the future of mobility is definitely electric. After Tesla smashed the apprehensions surrounding electric vehicles (EV) in the global space, Indian manufacturers were inspired by the immense possibilities EVs offered. Sure, they also got an intimidating push from Nitin Gadkari, India’s transport minister, in the form of a deadline to go all-electric by 2030. Feasibility issues aside, this has motivated local manufacturers to think out of the box and come up with innovative products like the S340, Flow and the Praise. So, which one of these scooters is ahead of the curve, on paper at least?

The Ather S340 is a sleek scooter designed entirely from the ground up. Its minimal black and white bodywork with a contrasting green trellis subframe gives the scooter a lean yet mean demeanour. The green rim tapes on the alloy wheels, colour coordinated with the subframe, also look rather cool. The neatly integrated tail light and indicators look futuristic as well.

The Okinawa Praise, on the other hand, has a muscular moto-scooter-inspired design. Up front, the apron is dominated by a large angular LED headlamp flanked by LED DRL strips on either side of the apron extensions. The bodywork gets a fancy colour scheme, and the rear features a cushioned backrest. Even though it interrupts the design, the backrest does enhance pillion comfort.

The folks at Twenty Two Motors have given a fluidic touch to the Flow, complete with a funky yet sophisticated circular LED projector headlamp. The pillion footrest is integrated into the curvy bodywork, and the seat features a rather fat grabrail.

All three scooters are a fresh departure from regular scooter design, which should help them garner the attention of prospective buyers.

The Ather S340 has features that’ll put premium scooters to shame. Its battery pack has been placed inside the floorboard to lower the centre of gravity. The motor is also mounted as low as possible, with the scooter having a 51:49 front:rear weight ratio. Moreover, the lateral offset is zero for perfect symmetry and for optimal handling. The 7-inch, IP65-rated capacitive touchscreen displays way more than all the required information, while the Ather smartphone app helps in tracking the charge status and push navigation details to your vehicle. You can even view your ride patterns, get tips for improving vehicle performance, and request for vehicle diagnostics. What’s more, the scooter’s firmware also features over-the-air updates for constant improvements!

The Okinawa Praise comes with keyless start and remote. There’s a side-stand sensor that prevents the scooter from moving when it’s down. It also sports CNC-machined brake levers which are adjustable. There’s a USB port behind the front apron to charge your phone. The LCD screen, though, is relatively simple than the ones seen on the S340 and the Flow.

The Twenty Two Motors Flow comes with smart riding modes like Cruise, Drag and even Reverse. The scooter also offers Bluetooth connectivity, through which you can activate automatic geo-fencing, view the changes in driving pattern, receive daily alerts and daily battery use analysis, vehicle remote diagnosis and fleet management.

The Twenty Two Motors Flow gets a commendable range of 160km from its lithium ion dual-battery setup. The Bosch-developed DC motor produces a massive 90Nm of torque at 100rpm. This helps propel the scooter to a claimed top speed of 60kmph. The battery can be charged up to 70 per cent in an hour using fast charging. Furthermore, the front and rear discs’ regenerative braking system recycles 6 per cent of the battery capacity. The scooter is suspended on telescopic front forks and dual rear hydraulic suspension.

The Okinawa Praise has an impressive claimed range of 170-200km per charge. You have the option to choose from 72V/45Ah VRLA battery or a more reliable, modern 72V/45Ah Li-ion unit. The former takes 6-8 hours to charge, whereas the latter takes only 1 hour, both under ideal testing conditions. The scooter can hit an impressive top whack of 75kmph in ‘Turbo’ mode. Apart from this mode, there are ‘Eco’ and ‘Sporty’ modes as well. The Praise rides on sophisticated gas-charged telescopic forks up front and twin rear shock absorbers with dual-tube technology. For braking, the scooter gets a twin-disc setup on one side of the front wheel. The rear also gets a disc, and further enhancing the brakes, Okinawa has equipped them with Electronic-Assisted Braking System (E-ABS) with regenerative energy.

The Ather S340 draws power from a brushless DC motor that’s rated for 6.79PS and 14Nm. Ather claims their 2.2kWh lithium ion battery has a life of 50,000 km. The battery is also IP67-rated and the claimed range stands at 60km. Using Ather’s fast charging system, you can juice it up to 80 per cent in an hour. The scooter can reach a claimed top speed of 72kmph, which is sufficient for city runabouts. The rear monoshock is progressively damped, and the front and rear discs come with CBS for optimum braking performance. Ather has even equipped the S340 with a reverse mode that helps in taking the scooter out of tight spots effortlessly.

Ather is expected to launch the S340 next week, with pre-orders opening in June. Considering its features, the scooter is likely to be the most expensive among the trio, and we expect it to be priced at around Rs 1 lakh (ex-showroom).

The Okinawa Praise is priced at Rs 59,899 (ex-showroom Delhi). But what really brings the scooter on par with its petrol-powered counterpart is its range and running cost, which makes it a good proposition in itself. At Rs 74,740 (ex-showroom Delhi), the Flow commands a slight premium over the Praise and can only be purchased online. Twenty Two Motors also offers lifetime warranty on the battery.

The S340, Praise and the Flow are perfect examples of how exciting an electric scooter can be, thanks to their contemporary features.

If you’re really on a tight budget, but want a good value-for-money scooter, the Praise makes good sense, especially considering the brand’s claim of 201 (and counting) dealers in the country.

The S340 also seems to be promising when it comes to both build quality and features. However, it will not be cheap, but that’s the price you pay for radical Indian R&D.

The Flow will appeal to riders who want a trendy design with technology to back it up. Moreover, its spare parts can be purchased via the app, and are available over the counter. Special components will be available at the brand’s experience centres.