Has the 2019 Elantra’s BS6 upgrade toned down its performance? We pitch it against its rivals and its predecessor to find out 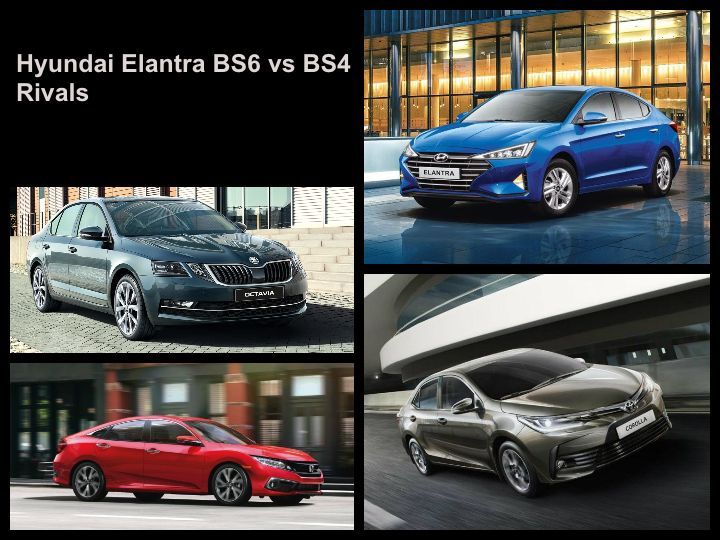 Hyundai Motor India recently launched the 2019 Elantra facelift sedan at Rs 15.89 lakh (ex-showroom). It comes with a revamped design, slightly altered interiors as well as a long list of premium features including the BlueLink connected-car tech. The Elantra is also the only car in its segment to come with a BS6-compliant 2.0-litre petrol powertrain. Has the BS6 upgrade cost the Elantra in terms of throttle response and eagerness to be revved? The only way to find out is by pitting it against its petrol automatic rivals, the Skoda Octavia, Honda Civic, Toyota Corolla Altis. We also find out how it does against its BS4 predecessor.

The new facelifted Elantra carries over its 2.0-litre petrol engine from the BS4 version. Power and torque outputs are unchanged at 152PS and 192Nm. The Skoda Octavia is the only car in the segment to come with a turbocharged petrol engine. Its 1.8-litre TSI motor develops class-leading power and torque figures. On the other hand, the Japanese duo comes with a 1.8-litre naturally aspirated powertrain developing similar power figures. It must also be mentioned that the Civic's 1.8-litre i-VTEC engine also complies with BS6 emission norms.

We have tested the automatic variants for this comparison. The Elantra utilises a 6-speed torque converter unit, the Octy a 7-speed DSG while the Civic and Corolla come with a CVT.

Which Is The Quickest?

The BS6 Hyundai Elantra is actually a tad faster than its predecessor. It does the 0-100kmph run in 10.66 seconds, which is 0.25 seconds faster. Even the kickdown time during roll-on acceleration has improved and the Elantra BS6 does the 20-80kmph 0.36 seconds faster than the BS4 car. However, these numbers are not class-leading.

The best performer here is the Skoda Octavia. It has class-leading numbers thanks to a turbocharged engine. Its 250Nm torque is also produced from a bare 1,250rpm. Coupled with a lightning-quick 7-speed DSG means it has the best acceleration and roll-on times. It does the 0-100kmph run in 8.26 seconds and the 20-80kmph run in 5 seconds dead.

Thanks to identical power outputs and transmission units, the Corolla and Civic have a closely matched 0-100kmph and roll-on timings. However, it must be mentioned that the Civic is the slowest here. This is a bit of a shame as its predecessor was known for its lively performance with its torque converter transmission.

*Average fuel efficiency calculated in the ratio of 50 percent city and 50 percent highway.

The Elantra BS6 is more fuel efficient than its BS4 version. It is also the most fuel efficient car in the city. On the other hand, the Corolla Altis has the best fuel economy on the highway. The Civic and pre-facelift Elantra play middle ground here while the Octavia is the least efficient of the lot.

It also reflects in the Octavia’s poor 602km range despite a decent 50-litre fuel tank. It is the same with the Elantra BS4 while the Civic plays middle ground despite its small fuel tank. The Elantra BS6 will require fewer stops at the fuel pumps thanks to its good fuel efficiency and a 50-litre tank. However, it's the Corolla that trumps all the cars here thanks to its biggest 55-litre tank that ensures you can go around 823km before running out.

The 2019 facelifted Elantra performed better than its BS4 counterpart in our tests. It is more fuel efficient and has better performance than the Civic, which used to set benchmarks earlier. And while highway fuel efficiency isn’t as good as the Corolla, it beats the rest by a fair margin. But if its lightning-quick performance that you’re looking for, the Skoda Octavia is your best option if you don’t mind frequent visits to the petrol pump.