Here It Is, The First Spy Image Of The Upcoming Tata Gravitas After It Got Christened 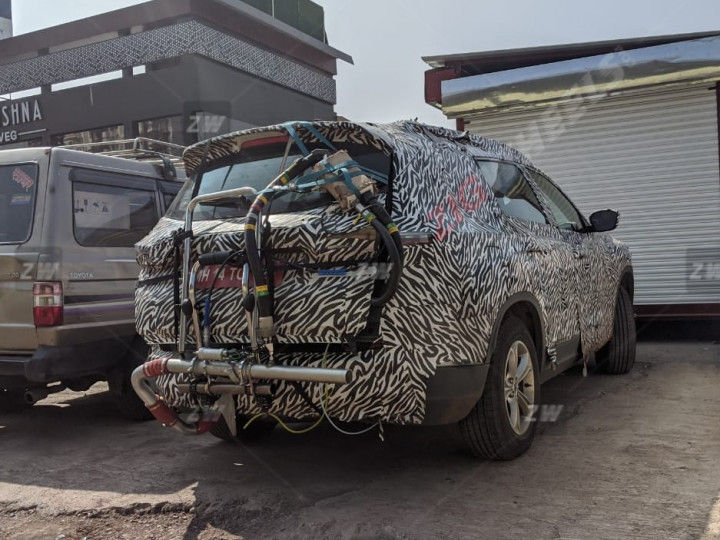 If you haven't been following the news lately, you might have missed Tata’s announcement regarding the name of its upcoming seven-seater SUV. First showcased as the Buzzard at this year’s Geneva Motor Show, the seven-seater version of the Harrier will be called the Gravitas when it goes on sale in February. The SUV is expected to break cover at Auto Expo 2020 along with various other Tata models and EVs. We spotted the Gravitas on the outskirts of Pune while being tested for emissions.

The spied test mule was seen equipped with a testing equipment called Real Driving Emission (RDE) analyser that is used to monitor emission levels.  It’s likely that the Gravitas was being tested for the upcoming BS6 emissions. The updated engine and other components will be carried forward to the Harrier in the near future. Moreover, the SUV’s cabin was spied recently, revealing a Hyundai-sourced 6-speed automatic gearbox. Apart from the automatic gear lever, the rest of the cabin remains identical to the Harrier. Highlights include the  8.8-inch touchscreen infotainment system with Android Auto and Apple CarPlay, climate control and semi-digital instrument cluster with a coloured multi-info display.

Like the Harrier, the Gravitas is based on Tata’s OmegaArc platform, which is related to Land Rover’s D8 monocoque chassis. The Gravitas is expected to be longer than the Harrier and carry a different design for the tailgate. It is also expected to sport a bulge in the roof for improved headroom in the last row.  The front fascia is expected to remain more or less the same while the side profile, especially after the B-pillar, will get some minor revisions.

Regarding the powertrain options on offer, the Gravitas will share the 2.0-litre Fiat-sourced Kryotec diesel engine with the Harrier. This engine, as we mentioned earlier, will be BS6-compliant. Output figures are expected to stand at  170PS as opposed to the Harrier’s 140PS state of tune. A 6-speed manual will be offered as standard while the Hyundai sourced 6-speed automatic will be optional on select variants.

Tata has announced that it will unveil the SUV in February.When launched, it will rival the upcoming Mahindra XUV500, MG Hector and other mid-size SUVs in the country. We expect it to be priced at a slight premium over the Harrier, which currently retails from Rs 13 lakh to Rs 17.2 lakh.