The Legender is a premium upgrade over the standard Fortuner, with more features and sportier looks 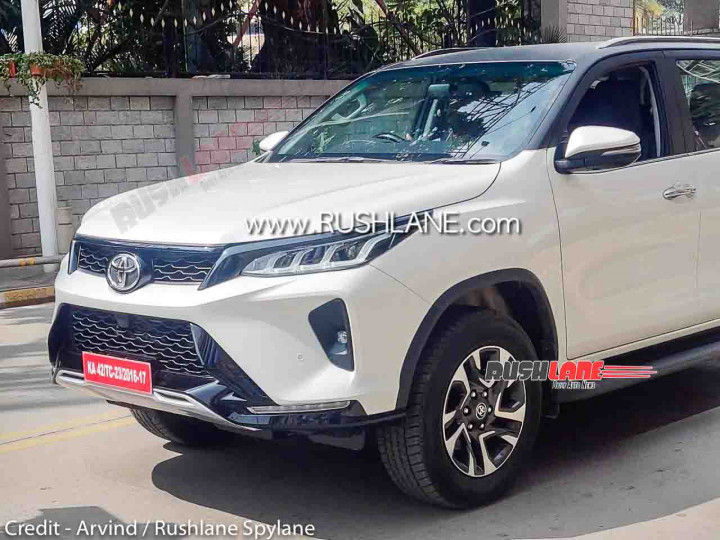 Fresh off the launch of the facelifted Innova Crysta last month, Toyota is all set to introduce the facelifted Fortuner. On its arrival on January 6, 2021, the large facelifted SUV will be accompanied by a more premium and sportier version called the Legender. Recent spy shots reveal design details for the Fortuner Legender.

In comparison with the facelifted Fortuner, the Legender sports an aggressive bumper and sportier headlamps with LED DRLs. It also gets a slimmer, blacked-out mesh grille and a larger air intake, adding to its premium look. From what these spy shots tell us, the Legender will get a blacked out roof, ORVMs, and roof spoiler.

Inside, the upholstery has been upgraded in terms of the materials used. It also gets a larger 9.0-inch touchscreen infotainment system, as opposed to the 8.0-inch unit in the standard model. Expected feature highlights include a 360-degree camera, wireless charging, and level-1 autonomous driver assists such as adaptive cruise control, autonomous emergency braking, and lane departure warning.

Under the hood, expect both the models to be powered by the same 166PS 2.7-litre petrol engine as the current model. The upcoming models may, however, see a change on the diesel front. Both could be powered by Toyota’s uprated 204PS 500Nm 2.8-litre diesel engine as seen in the Thai-spec model. While both the engines get 6-speed MT and automatic gearboxes, it's the diesel powertrain that’s likely to get the 4WD drivetrain.

Toyota will launch the facelifted Fortuner and Fortuner Legender on January 6, 2021. Some dealers have already started accepting unofficial pre-launch bookings for a token amount of Rs 50,000. The Legender will cost a premium above the facelifted Fortuner, which we expect will be priced Rs 50,000 above the current model. The Fortuner currently retails from Rs 28.66 lakh to Rs 34.43 lakh (ex-showroom) and locks horns with the Ford Endeavour, Mahindra Alturas G4, and the MG Gloster.