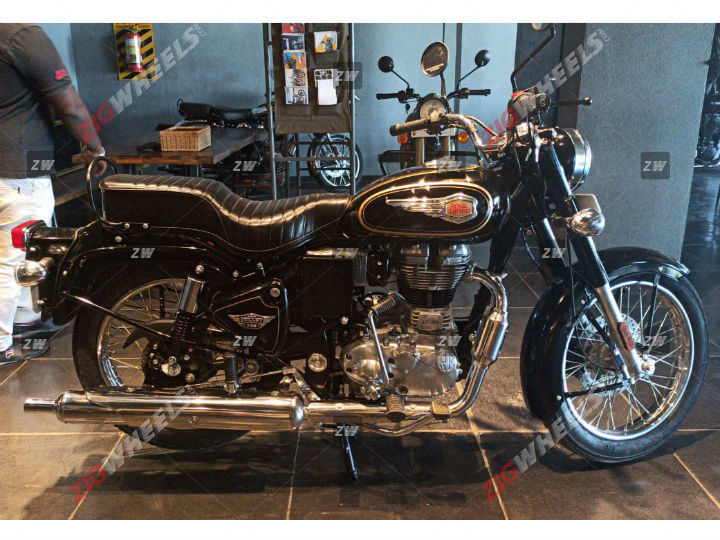 The Royal Enfield Bullet 350 BS6 has started reaching dealerships ahead of its official launch and we know its prices too. Starting at Rs 1,27,750, the Bullet 350 BS6 will become the most affordable, BS6-compliant Royal Enfield when launched. Let’s see what this motorcycle is all about in detailed images:

The Royal Enfield Bullet 350 BS6 looks identical to the BS4 model. In fact, the Bullet’s design has remained more or less the same for years, making it instantly recognisable.

The biggest update is the fuel-injected BS6-compliant 346cc air-cooled motor. This unit also powers the Royal Enfield Classic 350 BS6 and it produces 19.3PS at 5250rpm and 28Nm at 4000rpm.

The engine is mated to the same 5-speed transmission as before. The heel-toe gear shift lever has also remained unchanged. This setup doesn’t leave scuff marks on the shoe like toe shifters.

The motorcycle continues to sport a halogen headlamp with a prismatic lens. We’d have liked it if Royal Enfield offered a clear-lens unit for a slightly more modern feel.

The front end uses the same 35mm front fork as before. It offers 130mm travel.

The motorcycle comes to a halt using a 280mm disc up front with single-channel ABS.

The bike’s single-piece, ribbed seat has remained unchanged too. It is one of the most comfortable seats in any Royal Enfield with plenty of room for both the rider and pillion.

At the rear, it employs a 153mm drum brake. The rear wheel is suspended on twin shock absorbers which offer 80mm travel.