Hurray! Nissan Will Launch A Compact SUV This Year 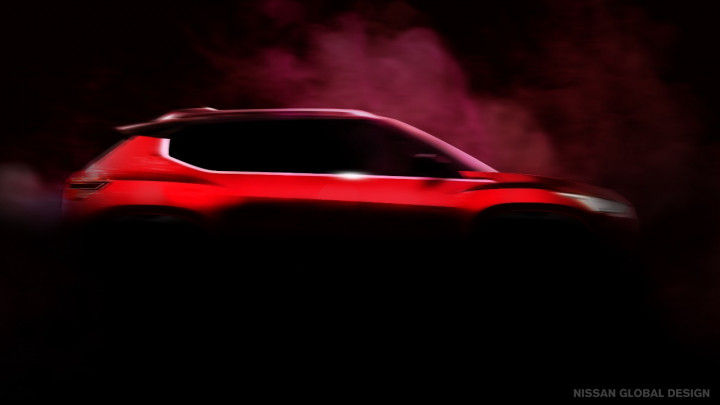 Nissan Motor India has announced that it will launch a made-in-India compact SUV in 2020. The carmaker teased the upcoming car in an image, and it resembles the Kicks SUV. Prices are expected to start at Rs 9 lakh. Once launched, the Nissan SUV will take on rivals such as the Hyundai Venue, Tata Nexon, Maruti Suzuki Vitara Brezza, and the upcoming Renault sub-4m SUV.

The carmaker did not disclose any details, but it is likely that the upcoming compact SUV will slot below the Kicks in pricing. Nissan says that it “features the latest technology as a part of Nissan Intelligent Mobility, the company’s vision as to how vehicles are powered, driven and integrated into society.” Could this mean the upcoming SUV will feature connected car technology?

Powertrains are likely to be petrol-only. If launched in the sub-4m segment, the SUV may borrow the 1.0-litre turbocharged petrol engine from the upcoming Renault HBC SUV (link to spy story). It is expected to make 95PS of power and could be mated to a 5-speed manual gearbox.

Nissan’s SUV will be its first made-in-India product. The company is in dire straits abroad due to the ousting of Carlos Ghosn which has prompted immediate policy revision. The discontinuation of the Datsun brand in key markets such as Russia is a part of Nissan’s strategy to regain its profits.

The sub-4m SUV segment is hotly contested in India and has seen rapid growth with a number of new launches. Cars such as the Maruti Suzuki Vitara Brezza and the Hyundai Venue are among the highest-selling SUVs in the country. However, with the Datsun and Renault compact SUVs in tow, Renault-Nissan will now have a three-SUV-strong portfolio for this segment in 2020.

Nissan to launch an all-New, Technology-rich and Stylish SUV in 2020

New Delhi, January 27, 2020 – Nissan will launch its first made for India Compact SUV on the philosophy of “Make in India, Make for the World”.

Building on Nissan’s global SUV heritage and advanced technology, the New Compact SUV is designed for tomorrow’s journey as a feature-rich premium offering with stylish design for a strong and dynamic road presence. Nissan’s new SUV features the latest technology as a part of Nissan Intelligent Mobility, the company’s vision as to how vehicles are powered, driven and integrated into society.

The Compact SUV is a testimony to Nissan’s Global SUV DNA spirit of relentless innovation and Japanese engineering, building on Nissan’s iconic models such as the Patrol, Pathfinder, Armada, X-Trail, Juke, Qashqai and KICKS.