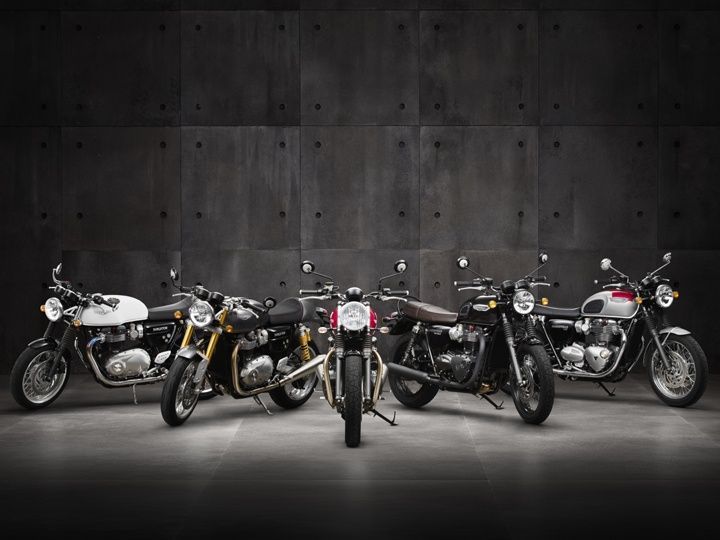 The Triumph Bonneville has been a unique proposition for those who have acquired the taste for old school bike styling with modern engineering. The motorcycle’s rich heritage, unmistakeable silhouette and reminiscence of the Triumph Tiger T100 makes it quite appealing, for most.  Back in the 1960s and 1970s, the Triumph Bonneville was considered to be the cool British superbike, and with endorsement from the likes of James Dean, Steve McQueen, among others, it definitely added to the bike’s charisma.

The current Bonnie when it was introduced in India a couple of years ago, which however was introduced globally somewhere around 2001 and has been receiving cosmetic upgrades every now and then. But with the growing competition, it desperately required a serious overhauling. We were part of the unveiling recently, as the Hinckley based motorcycle manufacturer unveiled the next generation Triumph Bonneville in London. This time round, Triumph has given the entire range of Bonnie a thorough makeover by introducing five new variants built ground up, and claims that not even a single bolt is from the outgoing model.

Developing the 2015 Triumph Bonneville is said to be one of the biggest projects the British motorcycle maker has undertaken in its modern history. And it is said to have taken 4 years to complete it, in spite of engaging the largest group of engineers to work on this new product. So, we found ourselves in Hoxton, which is a melting pot of vibrant art and entertainment in the east end of London, making it a pretty apt location for the unveiling of the bike which is the future of Bonneville with modern capability and performance but not a futuristic Bonneville.

And in a brick walled garage, which acts like a makeshift studio we got an exclusive sneak peak of five new Triumph Bonneviille models, including the new Triumph Street Twin, the Triumph Bonneville T120 and Triumph Bonneville T120 Black, along with the Triumph Thruxton and the top of the line Triumph Thruxton R. The bikes are based on a new chassis and suspension setup, designed unique to each Bonneville. Moreover, each bike gets a new powerplant based on a new Bonneville parallel twin engine family built specifically for the modern classic riding style, with more torque, better low-end power delivery, and a richer sound. Surprisingly, Triumph did not share much detail about any of the new models, but here’s what we know as of now.

The smallest (in engine capacity) and perhaps the most popular model is expected to be the new Triumph Street Twin, which comes powered by a new high-torque 900cc parallel twin petrol engine which comes mated to a 6-speed gearbox. It’s also the most contemporary looking, with a single part-digital instrument cluster, which looks rather modern on a classic inspired bike. Similarly, the headlight brackets have a brush metal finish, gramophone type exhausts and alloy wheels all hint at its modernistic tilt.

The good modern bits like ABS, traction control, slip-assist clutch are standard across the 2016 Triumph Bonneville models. In comparison to the other 2016 Triumph Bonneville models, the Street Twin has the lowest saddle height at just 750mm. The company decided to lower the seat height after receiving feedback from its (large in number but physically smaller) Indian and other Asian subcontinent customers.

Fed by a single throttle body, the new liquid cooled 900cc motor is tuned to produce peak torque of 80Nm at as low as 3200rpm, to ensure it to be more suitable for city and yet remains exciting enough. The engineers we met have confirmed that the new Triumph Bonneville Street Twin is 18 per cent more powerful than current bike and improved fuel efficiency by 36 per cent. There are five body colour options, and three of them are different shades of black. The 2016 Triumph Bonneville Street Twin is the lightest and most flickable and has been designed to attract new and younger motorcycle buyers, and bikers who would like to personalise the Triumph Bonneville with over 150 accessories to choose from.

Triumph Bonneville buyers can also opt for pre-designed and ready to fit ‘inspiration’ kits to customise their bikes. These effortlessly cool kits include Scramblers and Brat Trackers, to Track racers and Café racers.

A rung above the Street Twin are the 2016 Triumph Bonneville T120 duo. The big difference is a larger 1200cc powerplant that churns out peak torque of 105Nm at 3100 revs, also mated to a 6-speed transmission but here is fed by twin throttle bodies that are disguised as carburettors. Powered by the bigger motor, the T120s are close to 54 per cent more powerful than the outgoing models. While the ride by wire system would ensure that the bike is responsive, safe and more in control of the rider.

Among the many design features, what sets the 2016 Triumph Bonneville T120 and Bonneville T120 Black apart from the Street Twin are T120’s more authentic twin instrument cluster, spoke wheels, daytime running lights, pillion grab-rail and peashooter exhaust pipes which are tuned to sound richer and deeper. The 1200cc bikes also come equipped with riding modes which are neatly integrated in to the switch buttons. Other interesting features include an USB socket under the seat and immobiliser built into the key.

If cafe racer is your thing, then Triumph has something for you too. Like in the previous generation Bonneville bike range, the 2016 model also offers the Thruxton variants. The 2016 Triumph Thruxton and Thruxton R come packed with performance, braking and handling abilities to live up to their legendary name. This time round it is powered by a new 1200cc motor but tuned to punch out a massive peak torque figure of 112Nm at 4,950rpm, which is a whopping 62 per cent higher than the previous generation Thruxton. The 2016 Thruxton range design is an evolution of iconic Bonneville cafe racer styling with intricate detailing inspired from classic Triumph bikes of the past. They feature top quality finish and intricate level of detailing to enhance their iconic looks, such as the beautifully crafted Monza-style filler cap.

All new suspension and geometry has been tuned to offer better handling and neutrality - probably the best handling bike in the lot. Like the rest of the 2016 Triumph Bonneville gang, the Thruxton also comes with the optional Vance & Hines exhaust system which adds to the race bike feel. While the ‘inspiration’ kit for the first time includes a full factory Thruxton R Race Performance kit, specifically developed for closed circuit competition. It’s still not certain if Triumph will introduce all these five versions of the 2016 Triumph Bonneville motorcycles in India. But we know for a fact that the bikes will be produced in Thailand and launched in India in the forthcoming 2016 Auto Expo in New Delhi.