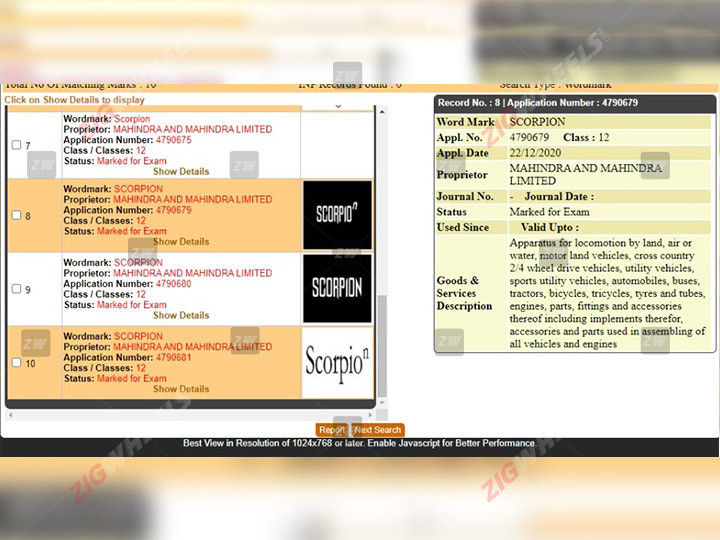 Mahindra has trademarked yet another name, possibly for a more powerful variant of the upcoming next-gen Scorpio. A couple of months ago, the carmaker trademarked the name ‘Scorpio Sting’ and now it has patented ‘ScorpioN’.

Fun fact: The combination of both names results in ‘Scorpion Sting’

Set to arrive next year, the next-gen Scorpio could be sold alongside the current-gen model. This might explain the Sting and N names used to differentiate the new model from the old. However, it is yet to be seen if both the names are used post-production or not. Like we expect with the Sting, the ScorpioN could be a more powerful variant.

In terms of size, spy shots and test mules have revealed that the next-gen Scorpio will be bigger in size compared to the current version. Inside, the layout seems quite unchanged, save for a bigger touchscreen infotainment system and new design elements, like a new 3-spoke steering wheel and indicator stalks. You can check out the interior spy shots in detail here.

Under the hood, the next-gen Scorpio will be powered by Mahindra’s latest engines: the 2.0-litre mStallion turbo-petrol unit and the 2.2-litre mHawk all-aluminium diesel engine. Both these engines are expected to give a higher output as compared to the current-gen’s 140PS 2.2-litre mHawk diesel engine. Expected transmission options include 6-speed manual and automatic gearboxes with rear-wheel drive as standard and 4WD as an optional drivetrain.

The next-gen Scorpio is expected to launch around mid-2021. The only body-on-frame SUV in its segment, the Scorpio will continue its rivalry with the Kia Seltos, MG Hector, Hyundai Creta, and Tata Harrier. In terms of pricing, expect it to carry a premium over the current model priced from Rs 12.42 lakh (ex-showroom) onwards.