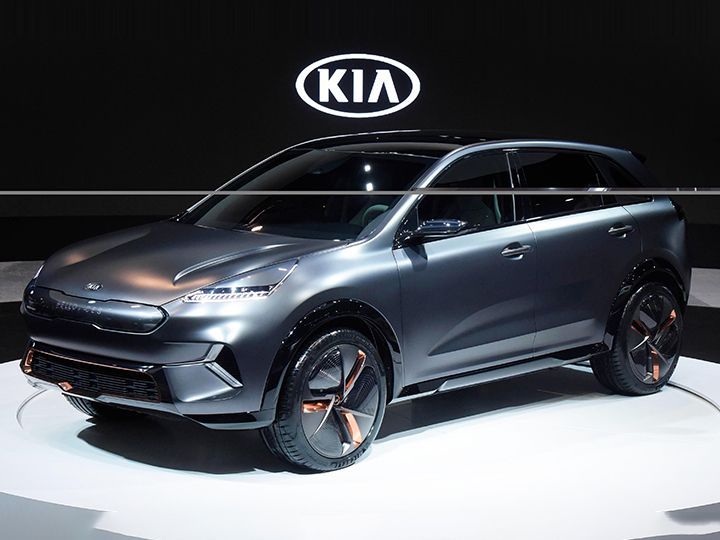 CES or Consumer Electronics Show is an international platform for tech manufacturers like Apple, Samsung and others to showcase some of their best research or products to the world. However, since quite some time now, even car manufacturers like Audi, Mercedes-Benz, Nissan and others have also started using this platform to showcase new tech and concepts. And this year is no different. Making its debut at the CES this year is Kia, the South Korean car manufacturer. The automaker has showcased the Niro EV Concept at CES 2018 and is also slated to enter India this year. This unveiling is a part of the brand’s plan of adding 16 more electrified models to its lineup by 2025.

The Niro EV Concept is the fully electric version of the Niro compact SUV, which is a parallel-hybrid powered by the combination of an electric motor and a petrol engine. The Niro EV concept, on the other hand, is powered by a 150kW electric motor which draws power from a 64kWh Li-polymer battery pack giving it a range of 383km. To put things into perspective, the standard Tesla Model 3 has a range of 352km.

As far as the design is considered, the Niro EV is nothing out of the box. It seems to take design cues from the Niro hybrid. However, since it’s an EV and more importantly a concept, there is quite a bit that separates it from the Niro hybrid. For instance, the grill has been replaced by a display panel which is flanked by sleek headlamps on either side. The side profile, though, is again reminiscent of the Niro SUV, as it gets a chunky C-pillar and cladding on wheel arches that house those large wheels. The rear, with the small tailgate and sleek LED tail lamps, looks quite attractive.

Kia has also showcased various cockpit concepts for the Niro EV. First of which is Kia’s new Human Machine Interface (HMI) in which the infotainment and HVAC systems are controlled by touch and gestures. The two-spoke steering doubles up as a remote letting the driver switch between favourite music tracks, turn up the volume and adjust cabin ventilation settings by just swiping on it. A digital display which provides additional information like vehicle settings, powertrain status, and trip information is housed inside the dashboard. And since it's 2018, the new HMI also allows the driver to log into the vehicle using face and voice recognition.

The second cockpit concept incorporates onboard 5G connectivity which enables users to stream content on the go. It also gets Kia’s sound separation technology, which allows users in the front and rear rows to listen to their own music without disturbing each other.

Along with these, the Niro EV also boasts a new pedestrian safety system. Called the Active Pedestrian Warning System (APWS), it employs a combination of cameras, object recognition and speakers to keep pedestrians safe. If the system detects a pedestrian or cyclist crossing in front of the car, the speakers sound an alert targeted specifically at that person, warning them of the car’s presence. Further empowering the APWS is the Nero EV Concept’s interactive lighting system. It enables the vehicle to visually communicate with the pedestrians by displaying text messages on the digital screen on the front fascia.

Like the car? You might get to see the electric SUV concept at the 2018 Auto Expo this February as Kia has already confirmed that it will bring 18 models to the Expo including hatchbacks, sedan, SUVs and EVs.