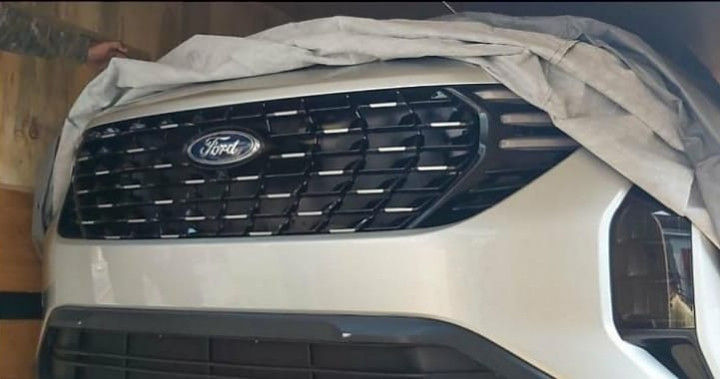 A spy shot of a mysterious Ford SUV has surfaced online, raising speculations that it could be Ford’s version of the 2021 Mahindra XUV500. Ford and Mahindra entered a joint venture in 2019, wherein the latter would own a majority stake of 51 percent. A total of seven new products would be developed under this JV and the first model that could see daylight is Ford’s entrant to the mid-size SUV segment.

The upcoming Ford SUV is likely to be based on the second-gen XUV500’s platform and could utilise Mahindra’s new 2.0-litre petrol and 2.2-litre diesel engines. However, it will look completely different inside-out, as evidenced by this latest spy shot. It features a bold front grille which gets a dash of chrome and is flanked by three stripes of LED DRLs. We can also notice the vertically stacked headlamps and these are likely to be LED units. The side profile and rear end are still under wraps, but we expect it to feature a complete redesign compared to the Mahindra SUV.

The Ford SUV’s interior is likely to be completely different as well. It is expected to come loaded with features like a touchscreen infotainment system with smartphone connectivity, FordPass connected car tech, cruise control, a sunroof, dual-zone climate control, and powered driver’s seat. Safety should be taken care of by multiple airbags, ABS with EBD, parking sensors, electronic stability and level-1 autonomous driving tech that is expected to premiere in the new XUV500.

While the Ford SUV could utilise the XUV500’s engines, it will likely get a host of updates underneath the skin. In fact, Ford could infuse its driver-centric magic to make this upcoming SUV a driver’s car. The SUV should also feature manual and automatic transmissions as well as an optional all-wheel drive system.

Ford’s upcoming SUV will sit between the EcoSport and Endeavour. It’s likely to reach showrooms by 2021-end, post the launch of the new XUV500. The upcoming SUV will fight it out with the Jeep Compass, Tata Harrier, MG Hector, Hyundai Tucson, and the 2021 Mahindra XUV500.