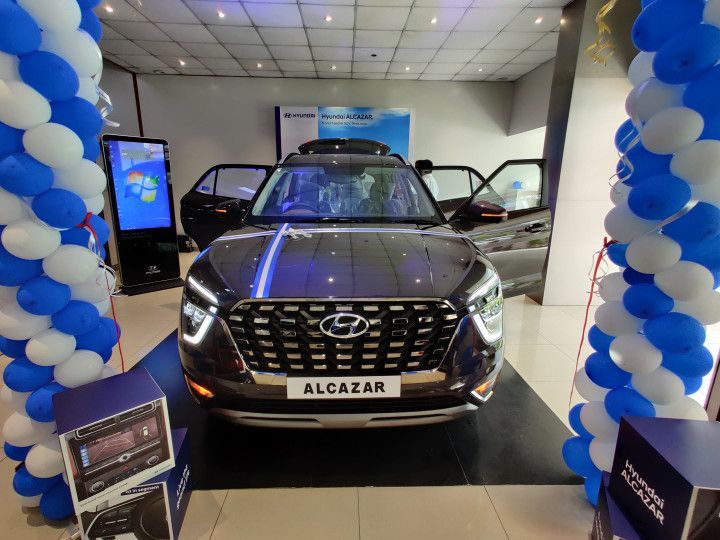 The Alcazar, priced from Rs 16.30 lakh (ex-showroom) onward, marks Hyundai’s foray into the three-row midsize SUV segment. Essentially an extended Creta, the Alcazar is more practical and feature loaded than its donor SUV. Scroll down to know more about Hyundai’s latest product as we explain in 10 detailed images:

The Alcazar’s front end might be quite similar to the Creta’s. However, the larger SUV gets a chrome studded grille and redesigned front bumper with LED fog lamps, making it distinct from the donor car. Also, the chrome elements from the grille extend to the split-LED headlamps.

At the side, the main addition is rear quarter glass in the Alcazar, allowing an airier experience for third row occupants. Also, the SUV sits on larger 18-inch alloy wheels (in comparison to the Creta’s 17-inchers) giving it a better stance for its larger body. The shoulder line that flows through the body has been retained from the Creta.

The Alcazar’s upright tailgate and new split-LED tail lamps look unique when compared to the Creta, giving it a much cleaner and much less polarized look. Also, the dual exhaust tips from the Creta’s Turbo variants are present here as well.

Inside, the Alcazar’s dashboard comes finished in a black-brown colour scheme in comparison to the Creta’s black/beige and all-black (with red inserts) unit. Also, the keen eyed will notice the addition of a 10.25-inch digital driver’s display, which is a first in the segment.

Like its rivals, the Alcazar can be had either as a 6-seater with captain seats or a 7-seater with bench seats for middle row occupants. The former also comes with a unique floor-mounted central console with a wireless phone charger. Other amenities include seatback trays and rear sunshades.

The third row can be accessed by tumbling down the second row. Also, Hyundai has provided creature comforts for the last row like separate blower controls, cup holders, and charging ports.

Other notable features in the Alcazar include a 10.25-inch infotainment system with Android Auto and Apple CarPlay, connected car tech, a panoramic sunroof, 64-colour ambient lighting, Bose sound system, ventilated front seats and a Bose sound system. Passenger safety is handled by six airbags, ABS with EBD, front and rear parking sensors, a 360-degree camera, electronic stability control, tyre pressure monitor, and a blind spot monitor (assists drivers in changing lanes by providing a live view of the blind spots on either side).

The Alcazar can be had either a 159PS 2.0-litre petrol engine or a 115PS 1.5-litre diesel engine. Both units can be had with 6-speed manual or an optional 6-speed automatic transmission that drives the front wheels.

Hyundai’s latest SUV is offered in eight variants, six monotone and two dual-tone colours. It rivals the Tata Safari, MG Hector Plus and the upcoming Mahindra XUV700. We’ll be driving the Alcazar soon. Stay tuned for our first drive.