The Haima 8S is a midsize SUV that locks horns with the MG Hector, Tata Harrier and Mahindra XUV500 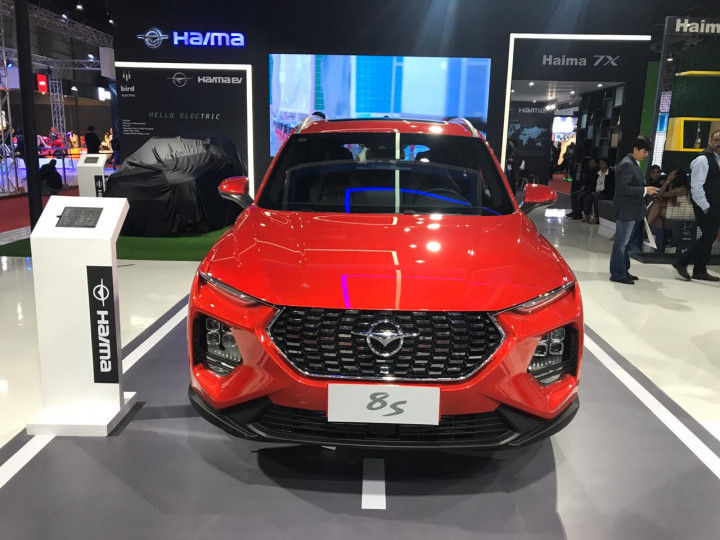 FAW Haima has made its India debut at Auto Expo 2020 with the 8S midsize SUV. It’s similar in size to the MG Hector, Tata Harrier 2020 and Mahindra XUV500, and sits in the hotly-contested midsize segment. Haima is the third Chinese carmaker to enter India after SAIC-owned MG Motor and Great Wall Motors. An interesting thing about the latest entrant is its name, which finds its origins in a partnership between the Hainan province government (China) and Mazda. Therefore, the name Hai-Ma. For India, the Chinese manufacturer has partnered with Bird Group which also owns Bird Electric.

Here’s a detailed size comparison between the 8S and its rivals:

The Haima 8S has an interesting design with plenty of creases and sharp lines. The grille and the split headlamp layout looks similar to the MG Hector. Then there’s the sharp crease that starts from the bonnet and flows cleanly through the front door. Like the Hector, the 8S gets a kink in its shoulder line right after the C-pillar. It sits on dual-tone alloy wheels which fill up the wheel arches quite nicely. At the rear, the 8S comes with sleek, connected LED taillamps and a sporty rear bumper.

On the inside, the Haima 8S gets a premium looking floating infotainment system and digital instrument display. Other highlights include a chunky three-spoke steering wheel and hexagonal AC vents. In terms of features, the China-spec model comes with features like a touchscreen infotainment system, climate control,  a voice command system, powered tailgate, adaptive cruise control, blind spot detection system, a 360-degree camera, and more.

The China-spec Haima 8S is offered with a 1.6-litre turbo-petrol engine that develops 195PS of power and 283Nm of torque. Transmission options include a 6-speed manual and a 6-speed automatic. If launched in India, the 8S could be offered with a BS6 diesel engine too.