The S 1000 RR sits on top of BMW Motorrad's food chain as the apex predator, the fastest and the meanest in the Bavarian bikemaker's lineup. 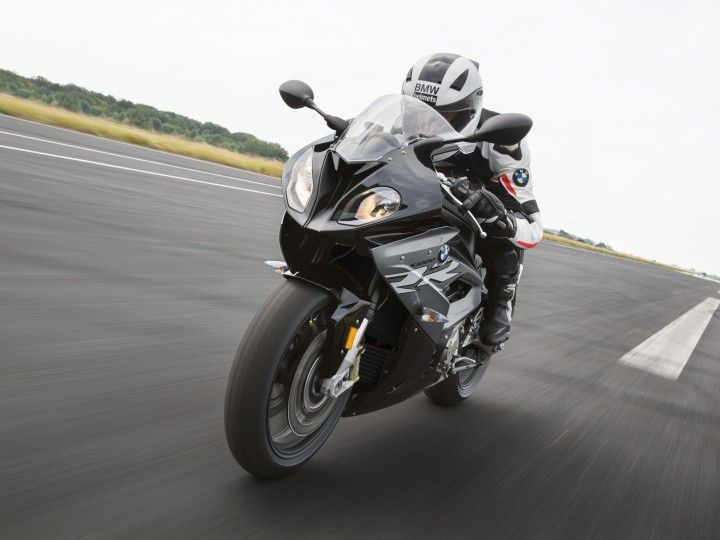 The S 1000 RR burst onto the superbike scene in 2009 and quickly won accolades for its performance, dynamics and the host of electronics it came laden with. It became the pick among litre-class superbikes for its clinical efficiency and ability to go around the track faster than the others.

Fast forward to 2015, the S 1000 RR lost 4 kilos and gained 6PS, raising the output to 199PS. This was accompanied by a reworked steering geometry and Dynamic Damping control - an electronic suspension package that was hitherto available only on the BMW HP4.

BMW bikes are known for their quirky and asymmetrical styling and this one is no different. The most striking feature of the S 1000 RR has to be the headlamp design. The twin headlamps feature an asymmetrical pattern and make the S 1000 RR stand out from a crowd of superbikes. The asymmetry continues in the fairing with the right side having shark fin-like ducts integrated into it and the left having a minimalist approach.

The headlamps are separated by a big air vent, bigger than even the Kawasaki ZX-10R and ZX-14 R. The tail section is sharp and ends into a rather large, stacked tail lamp integrated into it. The S 1000 RR carries most of its mass in the front and turns progressively leaner towards the back. The bike has large proportions and looks a size up on the lithe-designed competition.

One of the strongest assets BMW has had in its arsenal is its electronics package sourced from BMW's racing development section. The standard Dynamic Traction Control (DTC) gets data from the ABS sensor and lean angle sensors to provide optimum traction. DTC sensitivity changes according to riding modes and can be adjusted as per your preference. There are three riding modes on the standard version - Rain, Sport and Race. Additionally, there are two optional modes - Slick and Individual mode. The slick mode is a track-only mode with every setting set at their sharpest. Individual mode allows you to adjust each setting according to your preference.

Other options include cornering ABS, launch control, wheelie control, rear wheel lift mitigation and pit lane speed limiter. Shift assist pro allows you to perform clutchless upshifts and downshifts on the go. Dynamic Damping Control lets you adjust the S 1000 RR's electronic suspension setup. The electronic suspension refreshes every 10 milliseconds and relies on information like traction, banking and damper feedback to deliver the best setup for damper compression and rebound, on the move. The suspension setup also changes depending on rider modes, from being the softest in Rain mode to its firmest in Slick mode.

Under the fairing is a 999cc in-line four cylinder motor that puts out 199PS which is on par with other litre-class superbikes sold in the market today. This peak output is generated at a lofty 13,500 rpm. Peak torque is rated at 113Nm @ 10,500rpm but most of it is available from 4500rpm onwards. The throttle butterfly valves are electronically controlled and the bike features ride-by-wire. The tuned twin-port exhaust helps boost torque at low rpm speeds while its free flow nature helps make more power higher up in the rev range.

The S 1000 RR came into production solely to satisfy homologation requirements to compete in the World Superbike Championship. The bike has been developed with a lot of inputs from the BMW Motorrad racing division and shares a lot of tech with the BMW WSBK factory race bike. The 2015 update included a sharper rake angle of 23.5 degrees, a lower swingarm pivot and an improved frame with more flex dialled in near the swingarm area. The updated bike is said to offer better front-end feel and rear grip. The suspension components are developed by BMW itself. The front 46mm upside-down telescopic fork is fully adjustable for preload, compression and rebound damping. The rear monoshock too is fully adjustable for preload, compression and rebound damping. Braking is handled by dual 320mm discs with radially mounted four-piston callipers and a 220mm disc brake clamped by a single piston calliper. Wheels are cast aluminium with forged ones featuring in higher spec variants. The S 1000 RR comes with Pirelli Diablo Supercorsa SP tyres.