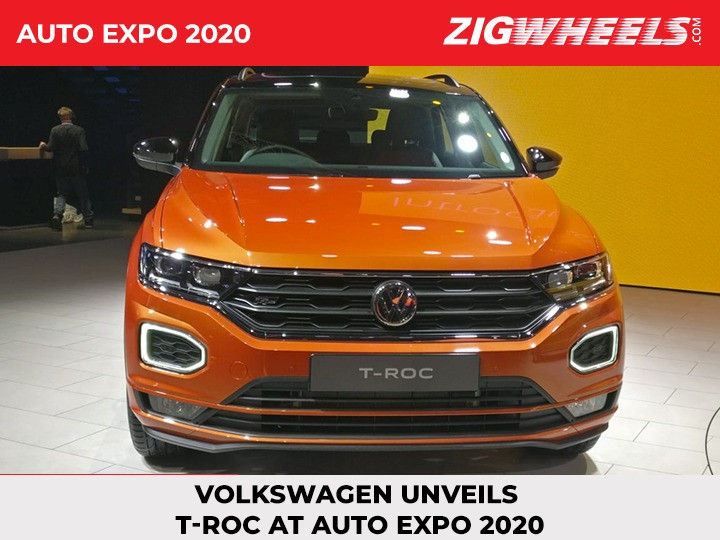 Volkswagen India has revealed the T-ROC premium midsize SUV, its answer to the Jeep Compass and the upcoming Skoda Karoq, at Auto Expo 2020. It’ll be available with a TSI petrol engine. Prices are likely to start around Rs 17 lakh (ex-showroom) as it’ll be brought via the CBU route.

The T-ROC’s front end comes with a slatted grilled, which merges onto the integrated LED headlamps and LED DRLs. Below it are the air dams, which come with funky surrounds. In profile, highlights include flared wheel arches, swanky alloy wheels, and a prominent shoulder line that runs through the side. Moving on to the rear, the midsize SUV comes with a raked tailgate and a set of split LED tail lamps.

In terms of size, the T-ROC is a shade smaller than the Jeep Compass and Skoda Karoq. Here’s a detailed comparison table:

Inside, the T-ROC’s dashboard design seems familiar as it borrows plenty of bits from other VW cars. Those of you own a Jetta/Passat will especially be familiar with its cabin.

Under the hood, the T-ROC comes with a 1.5-litre TSI engine that develops 150PS of power, paired to a 7-speed DSG gearbox. The TDI diesel engine won’t be available as Skoda Auto Volkswagen India will have a petrol-only portfolio in the initial phase of the BS6 era.

The T-ROC will launch in India by April this year, with prices likely to start from Rs 18 lakh (ex-showroom India). When launched, it will lock horns with the Skoda Karoq and Jeep Compass.