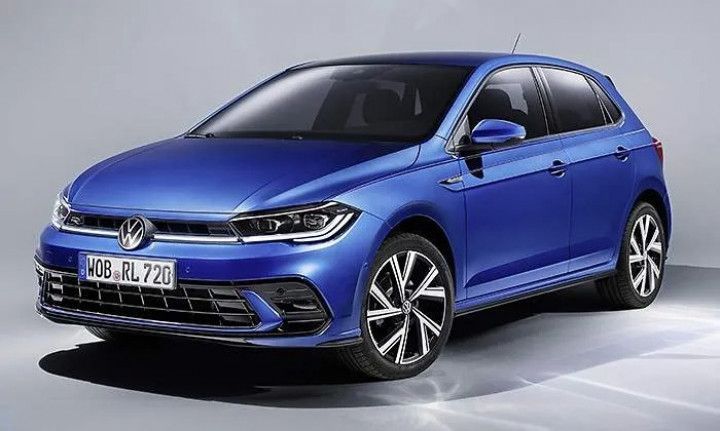 Images of the 2022 VW Polo have been leaked just a day ahead of its April 22 debut in Europe. The sixth-gen hatchback, unveiled in 2017, could be launched in India by 2023, considering the VW Group’s MQB A0 platform that underpins the hatchback has been localized already. Suppose the carmaker green-lights its India launch. In that case, we are likely to get the facelifted model straight away that’s set to debut tomorrow.

The rear end of the car gets all the significant updates compared to the pre-facelift model. The sheet metal has been tweaked to accommodate the new split-LED tail lamps. There’s also VW’s stylish new logo with ‘Polo’ boldly embossed below it. Walk past to the side, and you’ll notice the new dual 5-spoke alloy wheels.

Moving on to the front of the vehicle, we see the new dual-beam headlights connected by an LED DRL strip, design that’s in keeping with the latest VWs. An aggressively styled bumper tops off the styling on the outside.

The facelifted Polo’s interior is similar to that of the pre-facelift model. However, VW has spruced it up with a larger infotainment system, a new steering wheel (similar to the Taigun), and touch-based climate controls. Also, the gear lever (with P-R-N-D-S engraved on it) is identical to that of the Taigun.

The diesel, CNG, and turbo-petrol engines should be retained, too. Suppose VW decides to bring the sixth-gen Polo to India. In that case, it will likely utilise the 115PS 1.0-litre turbo-petrol engine from the Kushaq and Taigun. The current (fifth-gen) model utilises the same in a slightly lower state of tune (110PS).

VW is mulling the launch of the sixth-gen Polo in India at a premium somewhat similar to the i20. We expect it to be priced between Rs 7 lakh and Rs 12 lakh mark (ex-showroom).