The four-cylinder engine lineup will also extend to the AMG, essentially ditching the V8 and V6 motors from before 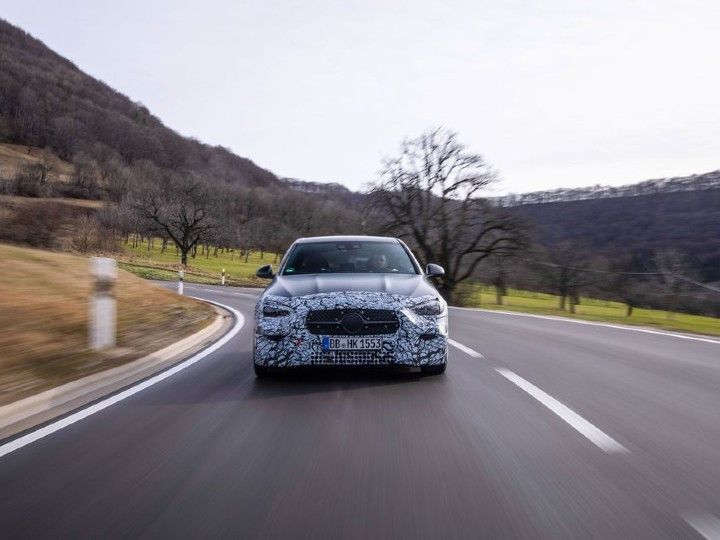 Post the debut of the next-gen Mercedes-Benz S-Class sedan in September 2020, the carmaker has been working on the next iteration of its scaled-down sibling, the C-Class. The updated sedan has been spied multiple times, but now the carmaker has previewed it to the international media in pre-production form. A lot is set to change with this generational update.

While the new C-Class still sports a bit of camouflage, the changes are noticeable. Up front, the headlights look slimmer with an LED DRL wrapped around. Even though it retains the predecessor’s overall silhouette, it has a wider stance and looks longer than before.

The more noticeable upgrades are inside where we can see a clear inspiration from its more premium sibling, the S-Class. This is apparent with the new C-Class’ dashboard layout that features a larger centre touchscreen infotainment system and a digital driver’s display. Additionally, it will also feature a Burmester audio system, a head-up display projecting information nearly 15ft ahead of the car, and the latest MBUX infotainment system with over-the-air updates.

Under the hood is where the C-Class will get the biggest overhaul. Gone are the V6 and V8 engines for four-cylinder petrol and diesel engines with a 48v mild-hybrid system. These engines will be paired to a 9-speed automatic gearbox. This also extends to the spicer AMG models. Plug-in-hybrid variants are also in the pipeline.

Expect the Mercedes-Benz 2022 C-Class to make its global debut later this month, with sales likely to kick off later in the year. Back home, the current-gen model is priced from Rs. 41.31 lakh to Rs 1.39 crore (ex-showroom India). The next-gen model is likely to make it to India by 2022. It will take on the Jaguar XE, BMW 3 Series, and the facelifted Audi A4.