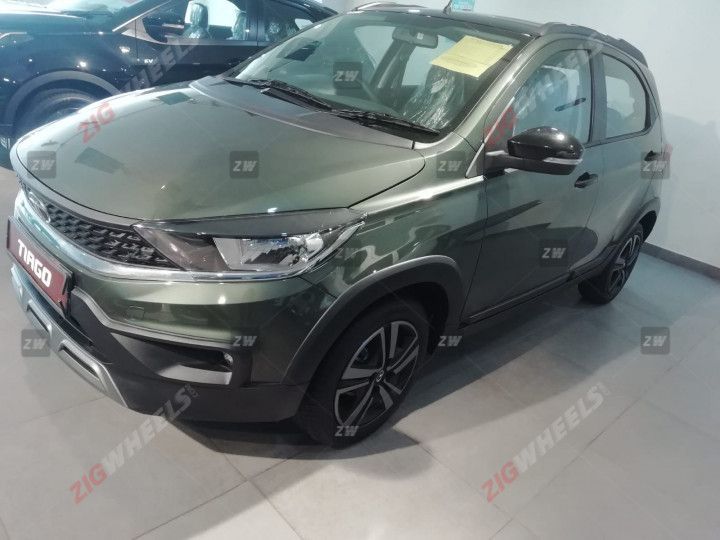 The updated Tata Tiago NRG has started reaching dealerships ahead of its launch on August 04. Select few have commenced unofficial bookings for a token of Rs 11,000. For those in the dark, the Tiago NRG is essentially the more rugged-looking variant of the standard Tiago.

As seen in these images, the hatch is finished in a new Camo Green shade like the Harrier Camo Edition. It gets all-round body cladding, which lends it a rugged look. Also, the new 15-inch alloy wheels and 11mm increased ride height take the overall ground clearance to 181mm. The extra plastic elements have resulted in a slight increase in dimensions too.

Inside, the 2021 Tiago NRG gets digital dials and a new three-spoke steering wheel from the standard facelifted model. The hatch also comes with keyless entry with push-button start, however, at the expense of climate control. It’s just the reverse in the standard Tiago, which features climate control instead of keyless entry with push-button start.

Other features in the Tiago NRG include a 7-inch infotainment system with Apple CarPlay and Android Auto, steering-mounted audio controls, front and rear power windows, and electrically adjustable ORVMs. Passenger safety is taken care of by dual airbags, ABS with EBD, and rear parking sensors.

Also Read: The All-electric Tata Nexon EV Has Been Launched In Nepal

The cross-hatch will be propelled by an 86PS/113Nm 1.2-litre petrol engine paired with either a 5-speed manual or a 5-speed AMT.

The Tiago NRG will likely retail at a premium of around Rs 28,000 over the standard model, which is priced from Rs 4.99 lakh (ex-showroom). It will lock horns with the Maruti Suzuki Celerio X.