Battle Of The Little Japanese Sportsbikes: CBR150R vs R15

Honda has just updated the CBR150R overseas, so let’s see how the two old rivals compare in images 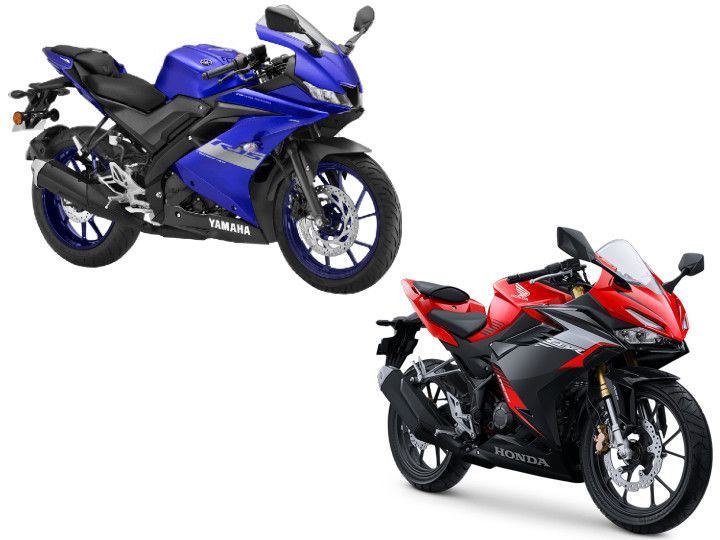 150cc was the magical number that signalled the arrival of performance bikes in India, way back with the Hero Honda CBZ in 1999. In its heyday, the Indian market had two fully-faired, liquid-cooled 4-valve 150cc sports bikes on sale in the form of the Honda CBR150R and Yamaha R15 V3. While the former is no longer sold here, it has just received a comprehensive update overseas, so let’s see how the two old rivals look side by side.

Both bikes draw inspiration from their elder siblings. While the R15 mimics the design language of the larger R6 and R1 supersports, the CBR150R’s appearance is derived from the pretty mental CBR250RR, including this funky headlight setup and sharp fairing design.

It has cutting-edge VVA technology and a slight displacement advantage, so it’s no surprise that the R15 holds a slight power advantage at 18.6PS compared to Honda's 17.1PS. But the CBR fights back by producing 14.4Nm of torque compared to the Yamaha’s 14.1Nm.

Overseas, Yamaha is kind enough to offer the R15 with an upside-down fork in some markets, but here in India, we have to make do with a right-side-up version. Honda, meanwhile, has gone the extra mile and thrown in not just a USD fork, but a lovely golden Showa SFF-BP unit at that. Kudos, Big Red!

Both bikes are neck and neck on the instrumentation front, each getting a fully digital cluster but making do with an LCD design, rather than a top-shelf colour TFT unit. While the amount of information shown is relatively equal (both bikes get a gear position indicator), the Honda’s display seems to be the more colourful of the two.

While the CBR150R is held together by a diamond-type frame, the R15 opts for Yamaha’s signature Deltabox perimeter frame. The Yamaha also has the upper hand in the form of a slightly wider rear tyre that’s also of the radial type - 140/70-R17 compared to the Honda’s 130/70-17.