Now sitting behind the driver is a 911-derived 4.0-litre flat-six motor that makes 420PS! 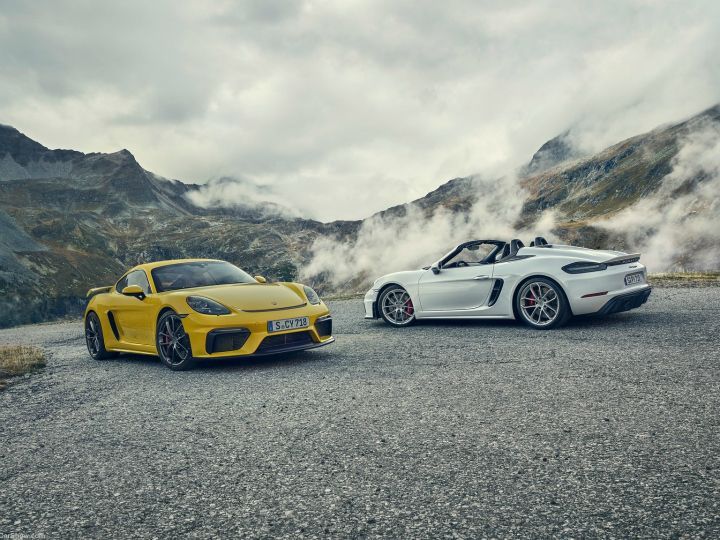 Some say Porsche is one of the few brands that listens to car geeks and outright driving nerds out there. Honestly speaking, we can't agree more. The German brand has taken the wraps off the more hardcore versions of its 718 twins - the Cayman GT4 and the Spyder. What makes the two stand out is the new turbo-free 4.0-litre flat-six engine instead of the 2.5-litre turbocharged flat-four seen on the regular variants. Even merrier news though, is the return of the third pedal!

The last-gen Cayman GT4, which was launched in 2015, came with a 3.8-litre flat-six motor coupled to a manual gearbox. But it has been three years since the Cayman dumped the glorious flat-six for a turbocharged flat-four motor. However, powering the 718 Cayman GT4 and the 718 Spyder is a naturally-aspirated 4.0-litre boxer/flat-six engine that sings all the way till 8000rpm. It produces 420PS of power and 420Nm of peak torque, with the max power coming in at a peaky 7600rpm. Both models can accelerate from nought to 100kmph in 4.4 seconds flat. Porsche claims that the 718 Spyder is capable of hitting a top speed of 301kmph, while the more focussed 718 Cayman GT4 will show 304kmph on the speedo.

Contrary to what was speculated, the engine is not the same high-revving 4.0-litre motor from the 911 GT3. Instead, Porsche took the engine from the current 911 Carrera, removed the turbo and added Piezo injectors and a cylinder deactivation system apart from a few other changes. Porsche has promised that the classic boxer sound will remain untouched. And that’s exactly what we want to hear.

The next party piece is the 6-speed manual gearbox which comes with long ratios so that it can comply with stringent emission norms. We don't think that’s an issue as far as there are three pedals and a stick to play with. There is also an auto rev-matching feature that can be switched off at the driver’s discretion. And to emphasise the fact that the GT4 and Spyder are meant for the driver in you, Porsche has decided not to offer the two with its famed PDK gearbox.

Both cars tip the scales at 1420kg. In fact, the new GT4 is 90kg heavier than the last one thanks to a new particulate filter, start stop system and other ancillaries to make it future-proof. Porsche says that the GT4’s aerodynamic efficiency has gone up by 50 per thanks to an adjustable rear wing and a new rear diffuser. The 718 Spyder is also ahead of its predecessor thanks to the benefits of the new diffuser.

Like its predecessor, the GT4 borrows its suspension and braking setup from the 911 GT3. Porsche also claims that the new GT4 will be 10 seconds quicker than the old version around the Nurburgring Nordschleife.

The GT4 can also be opted with the Clubsport package which deletes the stereo and comes with a roll bar, six-point racing harnesses and a fire extinguisher. The styling remains more or less similar except for a few aerodynamic additions.

As for prices, the Spyder will set you back by $96,300 while the GT4 has a sticker price of $99,200 (Rs 67 lakh and Rs 69 lakh respectively, excluding taxes). Not exactly affordable, but this is a sacrifice we guess many are willing to make, especially the purists.