As we gear up for a slew of launches and unveils next week, it was all about spy shots which dominated the news feed this time around 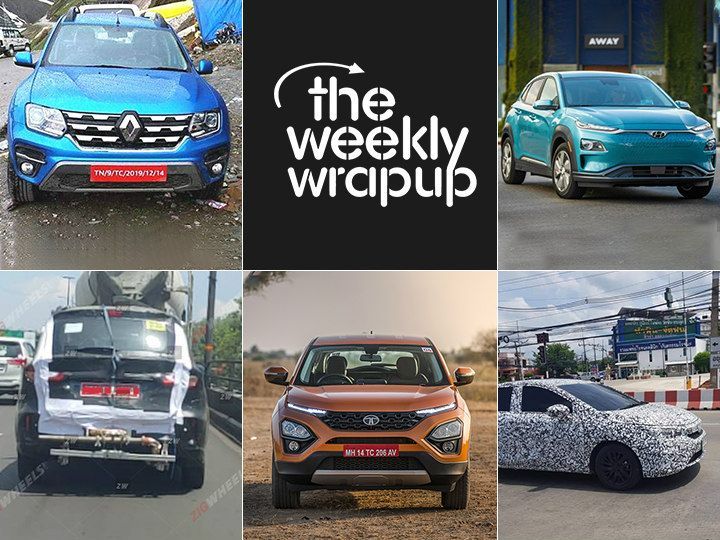 The last week was all about the automotive paparazzi being hard at work. The automotive news was filled with spy shots all over. Starting with the 2019 Ertiga Crossover down to the Renault Duster facelift being spied testing and finally ending with the 2020 Honda City spotted testing in Thailand. Aside from that, the Tata Harrier got a price hike which plays into the hands of its main rival, the XUV500. And finally, Hyundai has announced that it will launch India’s first all-electric SUV, the Kona, in select cities. Here are all the headlines from the world of cars in the second week of June.

Maruti Suzuki has been readying a more rugged version of its best selling 7-seater, the Ertiga. The new crossover, which might be called the Ertiga Cross, had been spotted testing for the first time in Pune. First impressions reveal similar body panels but with changes like the addition of roof rails, bigger chrome grille, flared wheel arches and a revised rear bumper design. Head here to know more about the new Ertiga.

Renault’s highly anticipated facelift of the Duster had been spotted testing camo-less at the Zoji La mountain pass at the Srinagar-Leh highway. The facelift sported minor cosmetic changes and gets a  new blue shade and alloy wheels. It will retain the same petrol and diesel engines as the current car, but with BS6 revisions. Interiors are also expected to get upgrades which include the addition of Apple CarPlay and Android Auto. It is expected to be priced at a higher premium over the pre-facelift. To know more about the changes, click here.

Honda has been working on a next generation of the City to take back its top spot in the mid-size sedan segment. The first spy images of the City have surfaced, showing it testing in a camo wrap on Thailand’s roads. First impressions reveal the new City to be longer and wider than its predecessor with cosmetic changes inside and out. It will retain the same petrol and diesel engines as the current car, but with BS6 options. A third mild-hybrid variant is also on the way. It is expected to be priced higher than the previous gen City. Head here for more details on the 2020 City.

Hyundai has revealed its sales plan post the July 9 launch of India’s first all-electric SUV, the Kona Electric. Hyundai plans to sell the Kona at a select 16 cities through specialized dealerships. The Kona electric is expected to get a 39kwh battery pack model for India which gives a claimed range of 289km(WLTP). Its design will be similar to the ICE Kona barring minor exterior changes. Head to the link for more info on the Kona Electric.

The Tata Harrier has been given a price hike for all its variants. The Harrier now starts from Rs 12.99 lakh (ex-showroom Delhi). This price hike could play into the hands of its main rival, the Mahindra XUV 500, which now undercuts the base Harrier by quite a margin. Head to the link to find out how much the Tata Harrier differs in price from before.