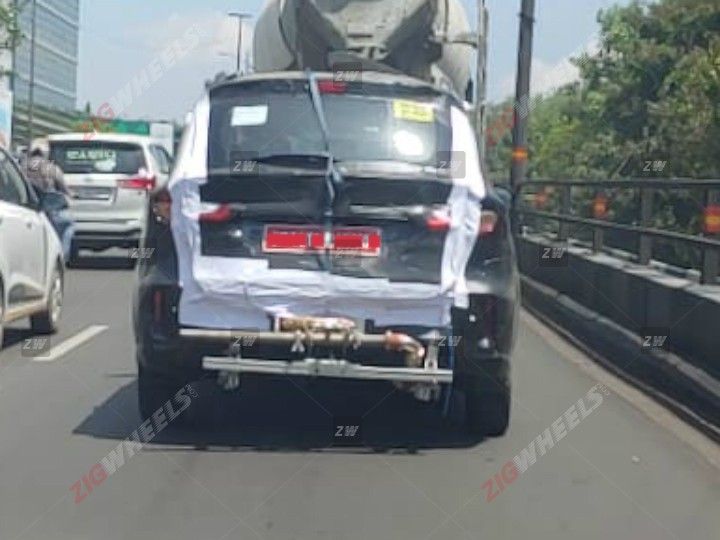 With the Ertiga, Maruti Suzuki tapped a new segment of budget-oriented 7-seaters. The Ertiga, based on the ubiquitous Heartect platform, is currently in its second iteration. It is a preferred choice among Indians and has been the biggest seller in its segment. Now, Maruti Suzuki is readying a more premium and rugged version of the Ertiga, which will most likely be called the Ertiga Cross. It was spotted emission testing for the first time in Pune.

The spied test mule’s body panels look similar to the standard Ertiga but there are some differentiating factors. Roof rails can be seen on the test mule along with flared wheel arches. The front end now features a more upright stance, with a beefier chrome grille and what looks like new headlamps with LED DRLs.

Ground clearance seems to be increased as well and although the interiors were not spied, the MPV will most likely come with captain seats in the middle row. It might also get all-black interiors, similar to the Black Edition Ertiga sold in Indonesia. The rear gets a different bumper design and the MPV spotted also had emission testing gear attached out back as well. Recently, a Ciaz with the BS6 1.5-litre Smart Hybrid petrol engine was also spotted with similar gear, and going by that we can expect the same to make its way into the upcoming MPV variant.

The Ertiga is currently available in a whole host of variants. It gets a 1.5-litre Smart Hybrid motor which makes 103PS and 138Nm of torque. Maruti Suzuki phased out the 1.3-litre diesel mill from the Ertiga lineup and replaced it with the newer in-house-developed 1.5-litre DDiS 225 which makes 95PS of power and 225Nm of peak torque. However, in the BS6 era, the Ertiga will have to make do with just the petrol option as Maruti has already announced that it will not upgrade any of its diesel engines to meet the upcoming norms. Thus, we expect only the 1.5-litre K15 motor to power the Ertiga Cross.

Even though other information is scarce about the upcoming version, expect it to be sold through Maruti’s Nexa chain of premium dealerships. The Ertiga Cross will slot above the standard Ertiga and will come loaded with more features. When launched, it will take on the more expensive Mahindra Marazzo and Renault Lodgy. The timeline for the launch is still not clear, but expect it to debut by the end of this year. The standard Ertiga is priced from Rs 7.45 lakh - 11.21 lakh (ex-showroom Delhi).