Exclusive: 2019 BMW X7 Caught Testing In India Ahead Of Launch 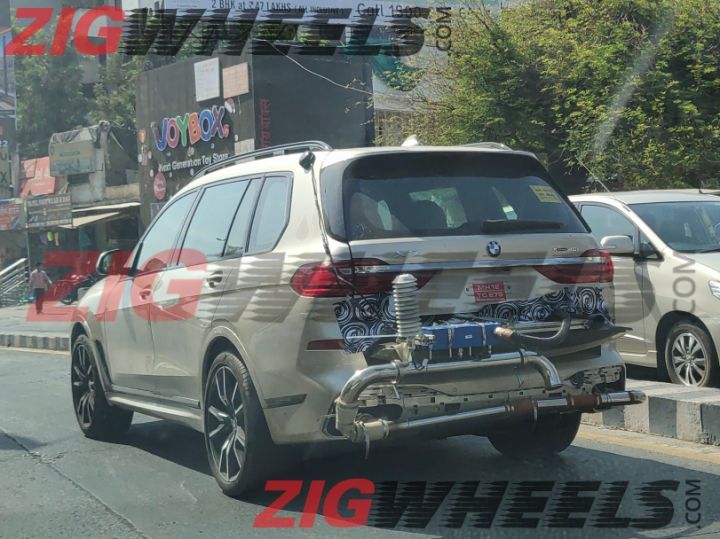 The India-bound BMW X7 has been spied testing for the first time in the country without any camouflage, ahead of its launch. The flagship SUV was officially unveiled in October 2018 and has now been spied months after it was listed on BMW India’s official website.

The X7 in question was spied by us in the Sunstone Metallic shade while being tested for emissions on Indian roads. The spied SUV wears no camouflage and looks like a production-ready version, hinting at an imminent launch. As you can see from the exclusive images, the SUV was also equipped with emission testing kit and is being tested by ARAI. The testing equipment is called Real Driving Emission (RDE) analyser, which is primarily used to test emission levels. It seems like the flagship SUV was being tested for BSVI compliance.

The SUV spotted is the lower-spec xDrive 40i variant which is powered by a 3.0-litre petrol engine that makes 340PS of power and 450Nm of torque. The spied SUV was also wearing an M sport badge on its fender.

The M sport kit comes with M aerodynamic package, side skirts, window graphics in gloss black, M sport exhaust, brakes and suspension system. It was caught riding on 22-inch dual-tone lightweight M sport alloy wheels. The SUV also gets M sport leather upholstery, steering, floor mats and door sill finishers. BMW has only listed the M50d variant on its India website, though, which uses a 3.0-litre diesel unit good for 400PS and a solid 760Nm of torque. Both of these engines will come coupled with an 8-speed automatic gearbox.

Expect BMW’s SUV to come packed with loads of features. Some of these include dual 12.3-inch displays for the instrument cluster and infotainment, four-zone climate control, six-colour ambient lighting, 10-speaker audio system, onboard Wi-Fi, a wireless smartphone charging pad and more. The international version is loaded with various other features, but it remains to be seen whether these will make it to India. A special off-road package is also available in other markets which adds an electronically controlled limited-slip rear differential, off-road driving modes, and a front skid plate.

BMW’s flagship SUV, when launched, will rival the upcoming Mercedes-Benz GLS, which is most likely to be launched in India by early 2020. The BMW X7 is expected to come with a sticker price north of Rs 1 crore in india. We expect BMW India to launch the SUV by the end of this year. Meanwhile, BMW will also be launching the new X5 in India on 16 May. So stay tuned for more updates on the latest crop of beemers in the country.