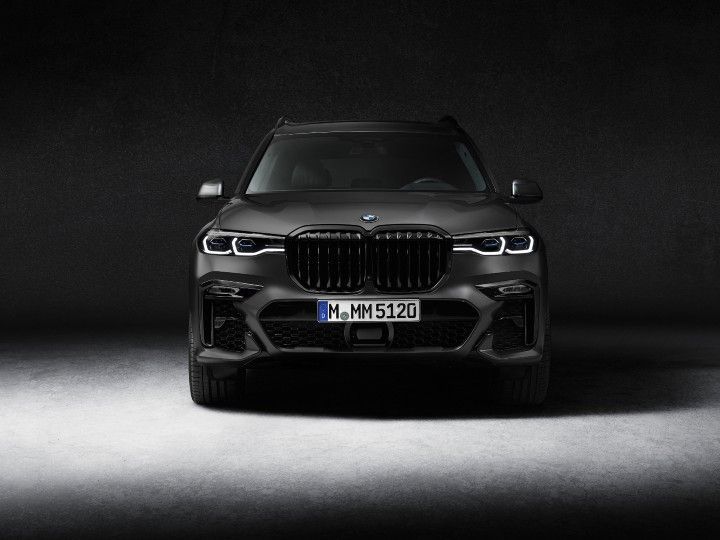 Imagine Batman ditching the Batmobile for something less extreme. Well, we think the BMW X7 Dark Shadow Edition, which has been launched in India at Rs 2.02 crore (ex-showroom), could be a pretty good option. Unveiled in markets abroad last year, it is based on the range-topping M50d and has been brought here as a CBU (completely-built-up) unit. It gets several visual enhancements that look menacing enough to be the ‘dark knight’s new chariot.

The most glaring change on the outside is the exclusive Frozen Arctic Grey body shade that gets a nice metallic finish. It is complemented by splashes of glossy black on the roof rails, tailpipes, and BMW’s trademark kidney grille. A bespoke set of 22-inch V-spoke M light-alloy wheels in a Jet Black matte finish round off the blacked-out exterior makeover for BMW’s flagship SUV.

The dark treatment continues on the inside, with a new two-tone blue and black cabin comprising Merino leather upholstery and Nappa leather inserts on the upper dashboard, armrests, and door panels. There’s also a Piano Black centre console finish and black Merino leather on the lower section of the instrument panel and the front backrests.

Since it is based on the range-topping M50d, it is loaded with features such as a 12.3-inch digital driver’s display, a heads-up-display, a 12.3-inch infotainment system with wireless Apple CarPlay and Android Auto, Harman Kardon 16-speaker surround sound system, wireless charging, and five-zone climate control.

Based on the M50d, it is powered by a beastly 3.0-litre quad-turbo diesel engine, pushing out 400PS of grunt and 760Nm of twist. Paired with an 8-speed automatic gearbox and BMW’s xDrive AWD drivetrain, it can go from 0-100kmph in just 5.4 seconds. It tops out at an electronically limited speed of 250kmph.

Other performance trickery comes from bits such as M Sport differential, a model-specific chassis setup, dynamic traction control, and adaptive air suspension. All this lends the SUV the thrills of an M Performance model.

The BMW X7 Dark Shadow Edition is quite an exclusive offering, with only 500 units allocated worldwide. So, if you intend to get one, you might want to hurry. The range-topping X7 takes on the Porsche Cayenne, Audi Q8, Range Rover Sport, and the Mercedes-Benz GLS.