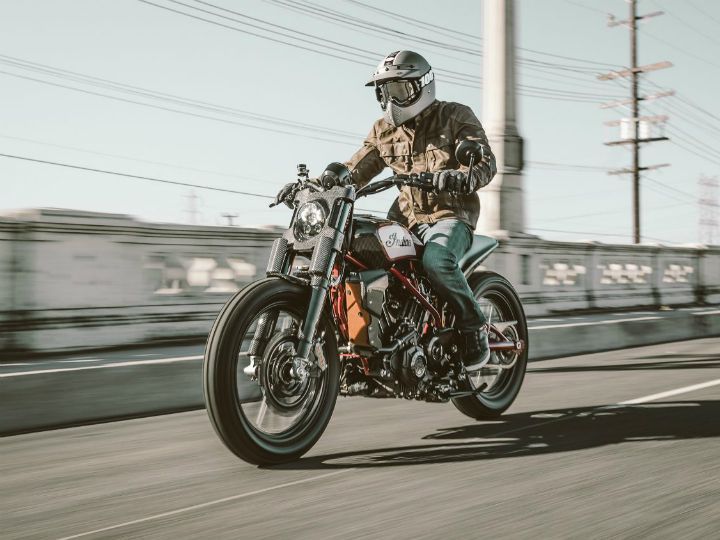 Created in-house with Indian’s race team, the Indian Scout FTR1200 Custom, which features a 1133cc, V-Twin engine that sits within a custom frame, resembles the racing version of the Scout, the FTR750. Like the race bike, the Indian Scout FTR1200 features a carbon-fibre body that helps it shed a massive amount of weight. Where the standard Scout weighs 244 kg at the kerb, the FTR1200 tips the scale at just 193kg! As expected from a top-spec motorcycle, it gets Ohlins suspension, high-mounted S&S pipes, and wheels from Roland Sands Design. The swingarm and the fuel tank have also carried over from the race bike.

Speaking on the occasion, president of Indian Motorcycle, Steve Menneto, said: “We built this bike to celebrate the FTR750’s dominant performance in American Flat Track and Indian’s return to racing. To come up with this one-off custom, we worked closely with the Indian Motorcycle Racing team to execute a vision of what a bike could look like if we brought the FTR platform to the street.”

“We’ve built a strong foundation in the Cruiser, Bagger, Tourer (CBT) segment over the past five years and we are excited by the positive feedback on the FTR750 and the opportunities to grow the brand globally in the years to come,” he added.

Once the 2017 EICMA wraps up, the Indian Scout FTR1200 Custom will go around the world throughout next year to be exhibited at events in an attempt to expand the brand's reach. Will it ever make it into production? We don't know yet, but we certainly have our fingers crossed.