The smallest of the Indian Motorcycles line-up comes packin’ with a 1000cc V-twin, but what is it to ride 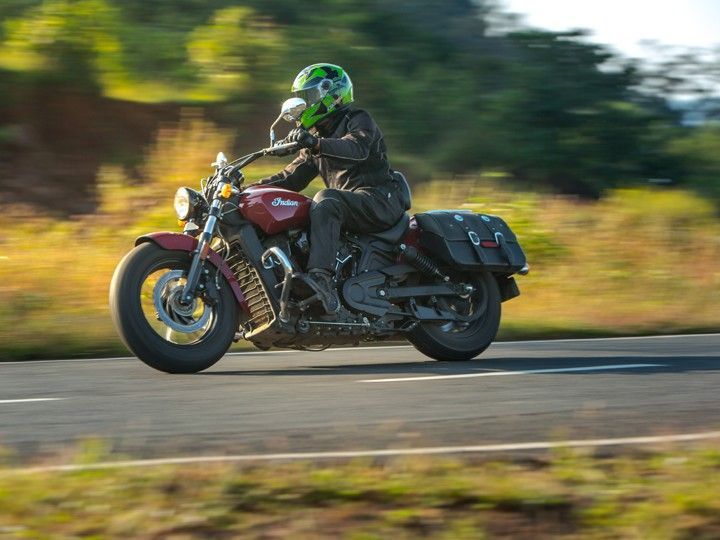 Of the two American V-Twin bike manufacturers, I have constantly found myself gravitating towards Indian motorcycles. It might be the less popular V-twin bike manufacturer here in India but for me the Big Red has always been more enigmatic, refined and more desirable. Indian motorcycle is, infact, the oldest of the two. The American bikemaker came into existence in 1901, two years prior to Harley-Davidson. Its bikes acquired quite a reputation in racing circuits around the globe and within a decade, rose to become the world’s largest bike-maker. The company has survived a century of world wars, the great depression and financial turmoil and is now owned by Polaris industries. Indian Motorcycles sell nine models in India of which the Scout Sixty is the smallest and most affordable. The Scout Sixty is based on the Scout with a smaller motor in place.

The Scout Sixty might have the same DNA as the Scout but there are quite a few changes to visually differentiate the two. The chrome trim on the engine covers and air cleaner makes way for a blacked out affair. The brown leather seat is replaced by a black padded vinyl unit and the tank decal minus the Scout badging is a good design call. The last visual change is the absence of the headstock cover above the headlamp which used to conceal the messy wiring. If you buy this bike, you should definitely invest in the headstock cover.

Otherwise the Scout Sixty has quite an appealing design with excellent levels of fit and finish. The old school vibe is brought out by the flat panels on the tank and the low seat. This is a low slung bike and a unique proposition to ride. You sit fairly close to the ground with the forward controls having your arms and legs stretched out, a tad more for my liking. Shorter riders will be happy with the seat which will allow them to place both feet on the ground but the reach for the controls might be an uncomfortable stretch. The test bike came with the optional luggage rack and saddlebags (a Rs 77,000 option) and a backrest for the solo seat (rear seat is an Rs 20,000 option). Now on the highway run, with my 5feet 8inch frame, I could not rest my back on the backrest while riding as in order to achieve that I would have to let go of the controls. Not a deal breaker in any way but a form of back rest or seat adjustment would be appreciated.

The ‘Sixty’ is supposed to signify the engine’s capacity in cubic inches, American style, though the capacity stands at 61 Cu in. Engine architecture remains identical with major changes affected on the inside. The bore has been decreased thereby reducing engine capacity to 1000cc from 1131cc.  The new 5-speed gearbox too is derived from the Scout’s 6-speed unit by doing away with the fifth gear ratio. Not that you would notice as the ratios are pretty tall so fifth gear is simply relegated to the highway run.

The engine is a highly refined unit with any form of vibration making itself felt post 5000rpm. The exhaust note is quite muted for my liking and I feel Indian makes some of the best engine sounds in the business with none of the associated mechanical rattles and clanks, just a sonorous rumble of expelled superheated gasses. It’s nothing a performance exhaust can’t fix though. The loss of cc’s equate to a relatively modest 78Ps and 88.8Nm delivered at 5800rpm, quite a high rev ceiling for a V-twin cruiser. The moor needs to be revved to extract performance, quite the antithesis of a V-twin cruiser.

While performance can be termed adequate, the USP of this motor lies in its refinement and flexibility which will allow you to cruise all day though you might have shift down a gear or too for high-speed overtaking maneuvers. The problem with all-day cruising is the 225km range of from the 12.5 litre fuel tank that will have you frequenting fuel stops more than usual.

Now most of you readers might know that the Scout Sixty is essentially a smaller, more affordable version of the Scout but did you know that that in 1932, Indian had used the same philosophy. It had a smaller Scout with the 610cc V-twin motor downsized from the 740cc Scout and a lighter frame. This Scout Sixty, however, uses the same cycle parts as the Scout and sports identical dimensions save for the 2kg reduction in weight and 643mm seat height that is now 8mm taller. The ride is cushy at low speeds.

It is quite a different matter at high speeds though as the soft, limited travel suspension tends to bottom out quite easily. Indian offers an aftermarket Fox fully-adjustable rear dampers overseas which takes care of high-speed ride and handling duties but is an expensive affair. Corner carving wasn’t exactly what Indian had in mind when they made the Scout and you do have to put in a bit more effort to coax the bike into a corner but it does grip well. Around town, the bike is easy to maneuver with its wide bars and low stance though the large turning radius is quite a bother as is the heavy clutch lever effort. The ABS assisted brakes are efficient but could do with a bit more bite.

That said, the most affordable bike of the Indian line-up is a worthy touring option if you consider the price. For Rs 11.99 lakh, you get what is essentially the Scout with similar dynamics and refinement levels but with a more accessible engine. It is expensive compared to the competition but you do get the exclusivity and a design language that would even look great parked in your living room. The customization options too are immense as the shared platform means the Scout Sixty accepts whatever accessories fit on the Scout. Indian motorcycles currently have four dealers across the country and cannot boast of a service network like Harley Davidson but it is slowing growing its dealer base and in the meanwhile have a 24X7 roadside assistance program should your Indian breakdown in the middle of nowhere. The Indian Scout is worth a look if you are on the lookout for a cruiser but want to stand apart from the HOG crowd.

PS- They do have an Indian Motorcycle Riders Group so that you don’t feel left out.