The 2015 Audi A6 facelift features updates to the exterior and interior and has been caught testing in Mumbai. The new Audi A6 will go up against the likes of the Mercedes-Benz E-Class, the BMW 5 Series and the Jaguar XF. 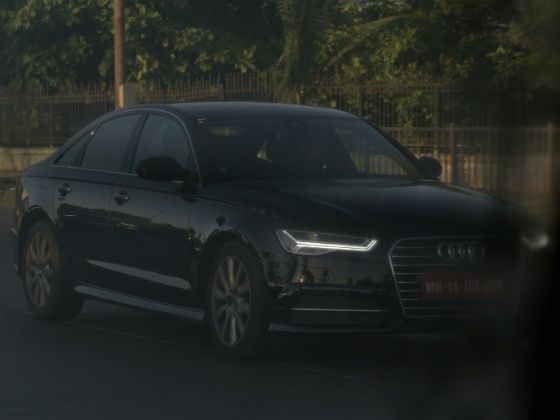 The current generation Audi A6 has been with us for a few years now and has sold great numbers. The new Audi A6 was showcased a few months ago and will soon make its way to Indian shores. As seen in the pictures, Audi has already started testing the next generation cars in Mumbai.

Distinguished mainly by newly detailed headlamps which feature a set of detailed twin lined fibre optic LED strips, the A6 looks much slicker and smarter than ever before. The headlights will now also feature LED headlamps as standard instead of a projector setup. There will also be an additionally priced Matrix headlamp option for the Audi A6 jut as is available in the newly refreshed Audi A8. The new split LED sesign also continues to the back with the A6’s new tail lamps. The updates around the back continue with a distinctive chrome strip on the bootlid’s edge accentuating the sheer width of the 2015 Audi A6.

The new 2015 Audi A6 also gets a few interior updates. The infotainment system with the MMI touch interface will still be available with the A6 as before though. The top-of-the-line version of the Audi A6 will come with a new navigation system with a new power-retractable eight‑inch monitor is now based on a new technology platform that uses the fast Tegra 30 graphics chip from Audi's partner Nvidia. The module will also include a LTE port which will offer online services to the user including support from apps.

The 2015 Audi A6 will get both petrol and diesel engines mated to a dual clutch automatic 7-speed gearbox. Of course, the Audi A6 will also get the all-wheel-drive Quattro drivetrain as standard. We should also see the exterior updates being applied on the quick and user friendly Audi S6 sedan soon. The 2015 Audi A6 will go up against the likes of the BMW 5 Series, the Mercedes-Benz E-Class and the Jaguar XF.