Here Are All The Juicy Details About The Multistrada V4 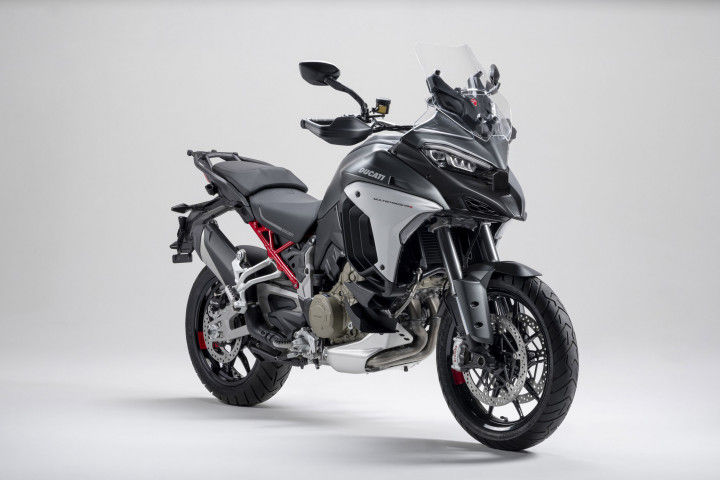 Ducati’s fourth-generation Multistrada has been unveiled and it receives massive updates in the form of an all-new V4 motor and cutting-edge tech. Here’s everything you need to know about the new Multistrada V4:

The Multistrada V4 carries the Multistrada 1260’s familiar silhouette but adds Panigale design influences to it. You get a more pulled back headlamp with Panigale-style LED DRLs. The front beak is sharper now while the windscreen offers more protection to the rider. It gets large fish gill-type vents and winglets on the side bodywork which Ducati says helps dissipate engine heat more efficiently. The side panels are missing and in its place, you can see the gorgeous looking red exposed trellis frame. The single-sided swingarm and dual stacked exhausts now make way for a dual sided swingarm and single exhaust unit.

The all-new 1,158cc V4 Granturismo engine is lighter and more compact than the 1,262cc L-twin Testastretta mill it replaces. While it does not break the 200PS barrier like its V4 cousins, the Panigale V4 and Streetfighter V4, the motor still makes plenty of usable power. It delivers 170PS at 10,500rpm and 125Nm at 8750rpm. The new motor delivers more torque than the Streetfighter V4 at low revs so climbing up a trail should not be an issue. Even more impressive are the service intervals. The new V4 motor needs an oil change every 15,000km and valve clearance check every 60,000km!

The Multistrada V4 features radar-based adaptive cruise control and blind spot detection. It uses radars on the front and back of the motorcycle to warn the rider of vehicles in the blind spots. Another cutting-edge feature that has trickled down from cars is the cylinder deactivation tech. The rear bank of cylinders on the Multistrada V4 shuts down at idle. Besides fuel savings, this helps keep engine heat low in traffic lights. It continues to use the de rigueur 6-axis IMU that manages cornering ABS, Ducati Wheelie Control (DWC), Ducati Traction Control (DTC) and Vehicle Hold Control (VHC). You can control all of this via the 6.5-inch colour TFT screen which now supports smartphone mirroring and navigation.

The Multistrada V4 gets an aluminium frame with a new double-sided swingarm. On the base model, you get 50mm fully adjustable forks and monoshock while on the V4 S and V4 S Sport you have an additional semi-active Ducati Skyhook suspension. The new electronic suspension now gets an auto leveling feature which detects the load on the vehicle and adjusts the suspension accordingly for better balance. All variants get dual 330mm discs with Brembo M50 Stylema calipers and a 265mm disc with Brembo calipers. The Multistrada V4 uses 19-inch front and 17-inch rear alloy wheels with Pirelli Scorpion Trail II tyres. Ducati offers the option of spoke wheels for every variant.

The Multistrada V4 now gets a large 22-litre fuel tank with a pocket on top to store your smartphone. It gets an 840mm seat height that can be adjusted to 860mm. It has a dry weight of 217kg.

The Ducati Multistrada V4 will replace the Multistrada 1260 in India. It is likely to arrive here sometime next year. We expect the pricing to hover around the Rs 25 lakh mark.