Watch Wednesday: A Watch Inspired By A Famed English Racetrack

Watches do not get sportier than this 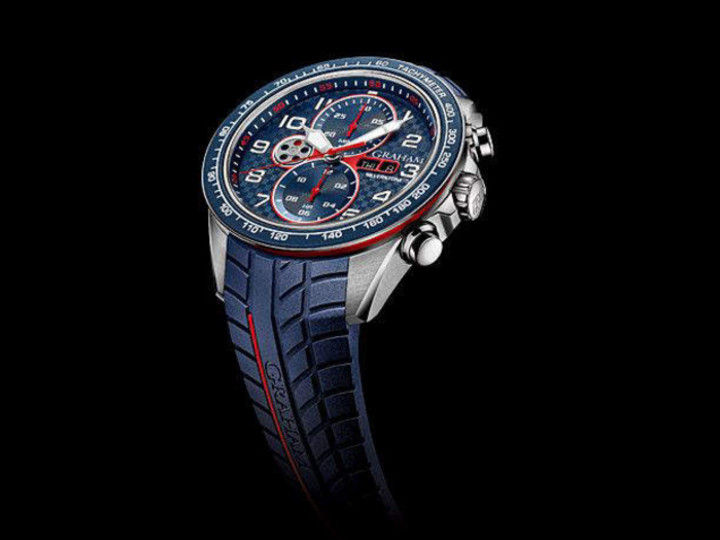 The Silverstone race track is one of the oldest circuits in Great Britain and home to the British Grand Prix. It has been around since the late 40’s and the first British Grand Prix race was held there in 1950. The circuit is also known as the home of British motor racing. The Graham Silverstone RennSport (RS) is a watch named after the famed circuit and is every bit as sporty as the racetrack.

The Silverstone RS gets a large 46mm stainless steel case with a brushed finish. It has a red aluminium ring that sits between the case and sapphire crystal that gets an anti-reflective coating. On the side, it gets a polished steel crown with the RS logo engraved on it and two steel push buttons on either side.

Also read: Watch Wednesday: A Norton You Can Wear On Your Wrist

The watch bezel is available in different colour combinations. In this case, a navy blue surface with white tachymeter numbers. Its navy blue dial gets a chequered pattern with large numerals. It contrasts well with the steel finished hour and minutes hand and the red seconds hands. Due to the large face, there is enough space for a weekday and date window. It gets three subdials which house seconds, 30 minutes and 12 hours chronograph counters. Overall, the face has a busy but well-executed layout.

Also read: Watch Wednesday: A Watch That Worships One Man’s Obsession With Speed

The back has a glass window that shows the inner workings of the mechanical watch. Another striking feature about the watch is its black rubber strap that looks like a car tyre tread. It gets a colour insert on one side for added sportiness and has the Graham name imprinted on the surface as well. If you like the touch of metal on your skin, there is a steel bracelet available as well.

Like other Graham watches, the Silverstone RS uses the G1749 automatic chronograph movement. It features an Incabloc shock protection system to improve the watch’s accuracy even in sporty environments where there is rigorous wrist movement. The watch has a power reserve of 48 hours and is water-resistant upto 100 metres.

The Graham Silverstone costs Rs 4.29 lakh and is a must-have if you are into collecting sporty watches.