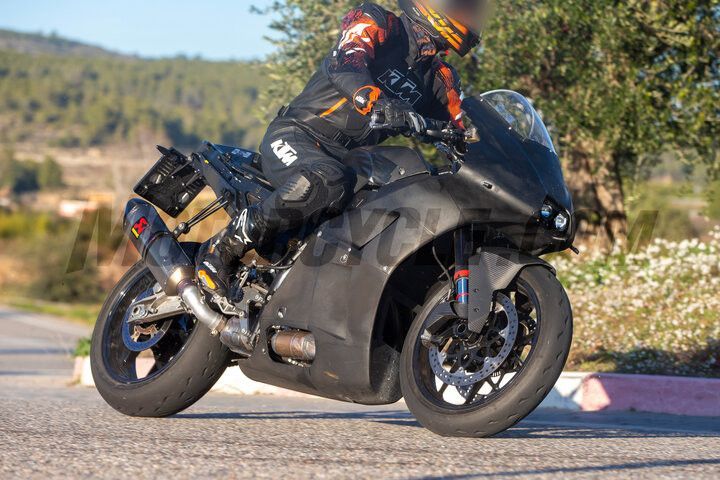 KTM’s road-legal supersport has been spotted testing yet again in Europe, just a day after the KTM 990 Duke was spied. What was earlier thought to be the street-going avatar of the limited-edition KTM RC 8C could indeed turn out to be the RC 990.

The bodywork is identical to the track-only beast, with bits like twin projector headlights and LED indicators (with the rear units) doubling up as taillight, a la BMW S 1000 RR, making it street-legal. However, upon closer inspection, you can spot the similarities with the 990 Duke.

The fairing covers most of the engine, but the new clutch case is identical to the one seen on the 990 Duke’s test mule. Furthermore, even the exhaust system, including its catalytic converter, seems like that of the naked. In fact, this mule was spotted testing alongside the Ducati Panigale V2, hinting that the Italian bike could be the performance benchmark for KTM.

While the KTM RC 8C produces 129PS from its 890 Duke-derived 889cc parallel-twin engine, KTM could be aiming to achieve around 150PS to match the performance with Ducati’s 155PS beast.

Complementing the performance is the hardware of the bike. The test mule spotted flaunted Brembo Stylema calipers, just like the KTM RC 8C. And just like its track-only sibling, the RC 990 has committed ergonomics. However, going by the wear marks on the fork, KTM could be experimenting with different handlebar heights. Lastly, the swingarm on the test mule is all-new (shared with the 990 Duke), and it appears to be longer than the RC 8C’s unit.

The KTM RC 990 is in the early stages of testing, so expect changes in the bodywork. And though the possibility of this bike coming to India cannot be ruled out, it won’t be until 2023 that the Austrian marque unveils the bike. Till then, we have the 2022 KTM 390 Duke and KTM 490s to be thrilled about.