Honda’s Five e:N Electric Concepts Give A Teaser On The Carmaker’s 2040 All-EV Roadmap

These models will hit production in China first in 2022, with exports likely happening later on 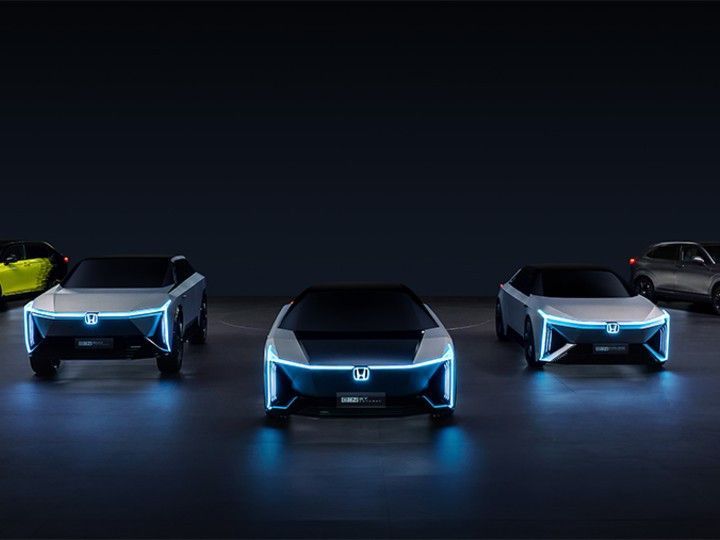 While carmakers globally have recently unleashed an onslaught of EVs, Honda's start to electrification so far has been relatively quiet, limited to the E hatchback. Now, the carmaker is set to go all in on its EV journey by revealing five electric concepts called the e:N Series at its electrification strategy event in China. Let’s take a look at what each of them are.

The first set of e:N Series concepts are the e:NS1 and e:NP1. The former is a crossover that already stands out with a nice blend of yellow and black all over the body. Coming to the design, we noticed a fairly chunky face with sleek headlights, and a sporty rear featuring a spoiler on the roof and tailgate. The latter may be a little less aggressive in its design, but is also a crossover. Eagle-eyed viewers will notice it is nearly identical to the SUV e: prototype showcased at Auto Shanghai 2021 back in April. These two models will be the first to hit production in China, around March 2022.

Next up are three distinctly designed concepts called the e:N Coupe Concept, e:N SUV Concept, and e:N GT Concept. As their names suggest they are an SUV, coupe and a grand tourer. Despite the three concepts having different body styles, they’ve got extremely sharp edges on the body. They also share a similar face that features illuminated bars spanning the entire width of the front end. These three models are slated to be launched over the next five years.

Details on the e:N Series models and technical specifications are scarce, but they will ride on a new dedicated EV platform from the ground up called the e:N Architecture. They’ll also use all of Honda’s latest bells and whistles which include Honda CONNECT and a smart Digital Cockpit.

The new models will also get the new Honda Sensing 360, an even more advanced, omnidirectional suite of safety and driver assists. This suite will utilize a variety of radars and cameras all over the car to remove any blind spots, which should in theory help in collision avoidance. Some of the assists on offer include collision mitigation braking system, front cross traffic alert, lane change collision mitigation, active lane change assist, and cornering speed assist.

While the Honda e:N Series range will be introduced in China first, the carmaker isn’t ruling out exporting these EVs in markets abroad in the future. Honda plans on having 10 models in the e:N Series range over the next five years. And to support that, the carmaker will also be building new plants at GAC Honda and Dongfeng Honda.

All this is part of Honda’s push for electrification, which includes selling electrified models in China after 2030, and then becoming an all-electric carmaker the world over by 2040.