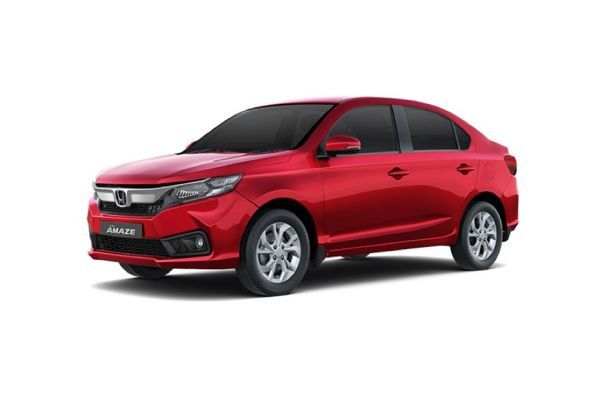 Prices for the Honda Amaze might be increased from 1st July as Honda has announced a price hike for majority of its models. This is to offset the effects of the price hike of raw materials as well as compliance to new safety regulations that will come into effect from 1st July 2019. The prices are expected to increase byRs 10,000-20,000 depending on the model.

The Honda Amaze is now available in a sporty avatar called the ‘Ace Edition’. The special edition sedan has been launched to celebrate the Amaze crossing the 1 lakh sales milestone. It is based on the top-spec VX edition and is available with both petrol and diesel engine options.

On the outside, the Amaze Ace Edition looks relatively similar to the regular Amaze aside from a few blacked-out cosmetic additions. It gets a black boot-mounted spoiler, black door visors, black alloy wheels, door edge garnish and an ‘Ace Edition’ emblem to complete the sporty look. The cabin gets ‘Ace Edition’ branded seat covers and new footwell lamps as part of the package.

Under the hood, It gets the same 1.2-litre 88PS/110Nm petrol and 1.5-litre 100PS/200Nm diesel engine options as the standard sedan, mated to a 5 speed manual or CVT option. The diesel variant gets a lower state of tune in the CVT variant with a power output of 80PS and 160Nm of torque.

The Amaze Ace Edition is priced from Rs 7.89 lakh to Rs 9.72 lakh and is available in three shades - Radiant Red, Lunar Silver and White Orchid Pearl. It goes up against the Ford Aspire, Hyundai Xcent, Tata Tigor and the Maruti Suzuki Dzire.

Honda’s second-generation Amaze promises to be not just a better compact sedan than it once was, it also promises to be a better Honda. To do just that, it borrows heavily from the Accord and the City in terms of design. It’s stuffed with the features you want too. What’s more, it’s packing an ace up its sleeve with the engine and transmission combinations. Over the usual manuals, Honda is offering a polished CVT automatic with both the petrol and diesel engine options. The Amaze has levelled up!

The Honda Amaze is offered with two engines - a 1.2-litre, four-cylinder petrol engine, and a 1.5-litre diesel motor. While the petrol makes 90PS of power and 110Nm of torque, the diesel gets 100PS and 200Nm. Both engines are available with a 5-speed manual or a CVT automatic. Do note that picking the diesel-CVT will get you 80PS/160Nm — that’s 20PS and 40Nm less. Save for the petrol-CVT, we’ve tested all versions of the Amaze. The petrol manual was expectedly the slowest to 100kmph, taking a full 12 seconds. Comparatively, the diesel-CVT took 11.27 seconds whereas the diesel-manual needed just 10.06 seconds to get to the ton. In terms of efficiency, the order is no different. The petrol manual returned 15.15kmpl (city)/20.01kmpl (highway), the diesel-CVT was second best with 19.28kmpl (city)/22.68kmpl (highway) and the diesel manual bagged the top spot again with 19.68kmpl (city)/23.37kmpl (highway). If you’re looking at getting some driving fun out of your Honda, make sure you pick the diesel. The petrol feels best suited for in-city commutes and occasional highway trips. Suspension is also better suited for city roads and tends to get a little bouncy out on the highway.

You get to choose between four Honda Amaze variants - E, S, V and VX. All variants can be had with either engine, but the automatic is available in the S and V variant only. A top-spec automatic variant is sorely missed. The base-spec E variant misses out on even essentials such as a music system, rear defogger and central locking. Next on the list is the S which we believe is great value for money. It gets electric-adjust and fold for the ORVMs, a 2DIN audio system paired with four speakers and a height-adjustable driver seat. Moreover, it also gets gloss black and silver highlights inside the cabin which make it look rich. Next on the list is the V trim, which is the one to go for if you’re buying an Amaze automatic. You get 15-inch alloy wheels, LED light guides, climate control and push-button start/stop for the added kit. The top-spec VX variant adds a touchscreen, a reverse parking camera and cruise control to the equipment list.

The new Amaze looks nothing like the car it replaces. In fact, most would wonder if it’s a Honda to begin with. The squared off design will undoubtedly draw a lot of polarising opinions. We think it looks quirky enough to stand out. That said, it desperately needs some bling like projector headlamps or even bigger machine-finished alloy wheels. It does get LED DRLs that try to add a premium touch to the overall design.

With the boxy straight-cut design comes an obvious advantage. Lots of space on the inside! There’s enough room inside the cabin for four six-footers to be seated. But, there’s a small hiccup, the angle of the dashboard forces the front occupant to sit further behind than usual. This limits space for the rear occupant. The boot, at 420-litres, is the biggest in its segment. In terms of features, the top-spec VX variant gets automatic climate control, a touchscreen infotainment system with Android Auto and Apple CarPlay, a parking camera as well as cruise control. It misses out on finer details such as rear-AC vents and a leather-wrapped steering wheel. To keep you safe, Honda is offering dual airbags, and ABS with EBD as standard across all variants.

Maruti Suzuki Dzire : The Maruti Dzire sits at the top of the compact sedan segment quite comfortably. The new generation has improved by leaps and bounds, and is among your best bets if you’re looking for a compact sedan.

Hyundai Xcent : : Based on the Grand i10 hatchback, this compact sedan combines space and practicality of a larger car with the reliability and low cost of ownership associated with the brand. The Xcent is not as spacious as the competition but has one of the better-built interiors. The Xcent does not get a diesel automatic variant, unlike the Ameo, Amaze or the Dzire.

Ford Aspire : : With the recent update, Ford has plugged all the gaps in the Aspire’s arsenal. The new petrol engine is almost as fun to drive as the diesel. It’s amongst the most value-for-money compact sedans on the market today! The Titanium + also features 6 airbags - a segment first.

Honda’s second-generation Amaze brings a lot to the table. Plenty of features, a spacious cabin, a refined petrol engine and a fun diesel too. The CVT stands out in a sea of jerky AMTs. Add the allure of the Honda badge, and you’ve got a product that appeals to the head and the heart!