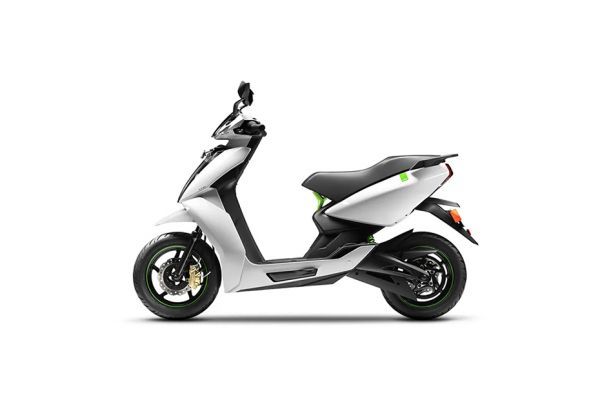 The Ather 450 will soon be replaced by the 450X Plus. Customers can choose to pay 1,699 every month aside from the upfront cost of the scooter, which stands at Rs 99,000, or buy the 450X altogether by paying Rs 1.49 lakh (both prices ex-showroom, Bengaluru). More information available here. The 450X will be available in Hyderabad, Pune, Delhi and Mumbai including Bengaluru and Chennai. Other cities still in the pipeline include Kochi, Coimbatore, Kolkata and Hyderabad. Head here for more details.

The new Ather 450X gets a 2.61kWh battery pack and a 6kW motor. Torque has increased from 20.5Nm to 26Nm and the range has gone up by 10km and now the scooter will go up to 85km in a full charge. Suspension duties are taken care of by a conventional telescopic fork up front, while the cast aluminium rear swingarm is suspended using a monoshock. Disc brakes at both ends combined with CBS means that the Ather is well equipped in the stopping department. However, the new Ather 450X is now 11kg lighter than the 2018 model.

In terms of features, it retains most of the equipment like a reverse mode, a full-colour TFT display and so on. But it has received some new features like Android operating system now instead of Linux, 4G and Bluetooth connectivity, ‘Find My Vehicle’ function and a new ‘Warp’ ride mode.

In terms of rivals, it goes up against the Bajaj Chetak and the new TVS iQube electric scooter.

Must Read Questions & Answers Before Buying 450

The 450's BDLC motor is capable of 3.3 kW of sustained power (5.4 kW peak). While it might not seem like much, it makes 20.5Nm of torque, which is as much as some 250cc bikes. That allows it a 0-40kmph acceleration time of 3.9 seconds and the ability to climb 18 degree steep gradients. Top speed is a true 80kmph. The battery pack is rated at 2.4KWh and affords an ARAI claimed range of 107km. Ather claims a real-world mileage of 75km in economy mode and 60km in power mode. The front telescopic forks and centrally mounted monoshock are responsible for the impressive ride quality the scooter has to offer. Braking is taken care of by a 200mm front disc and a 190mm rear disc with the added safety of combined braking system.

Ather’s focus has been on an absolutely clean design. The scooter in no way looks dated not is it typical of the traditional design approach we have seen with the Avtiva and Jupiters of the world. So you’ll never get lost in the sea of scooters out there. It clearly stands out of the crowd with with its attention to detail, like the exposed trellis frame finished in green and not to forget, the slim LED tail light, which is neatly integrated into the turn indicators along the rear bodywork. The best part of the design is the minimal branding on the fluid yet sharp lines of the scooter. The only bit that differentiates the 450 from the 340 is the green rim strips on the alloy wheels. The Ather 450 is packed with features. It gets a 7-inch touchscreen with built-in data connection and Google Maps, integrated with Ather’s own navigation interface. You can even search for nearby charging points on the AtherGrid. The phone app also displays scooter stats and battery charge status. The best bit though is the reverse assist system. The Ather 450 is a smart scooter at heart so the data from a total of 46 sensors, including a 6-axis IMU (Inertial Measurement Unit), allows Ather to develop algorithms to understand your riding style and offer better ride range. Ather can even assess any scooter problems remotely, with built-in connectivity for software updates over the air.

Okinawa Praise :
The Okinawa Praise has an impressive claimed range of 170-200km per charge. But you only have the option of a 72V/45Ah VRLA battery for now, as the more modern 72V/45Ah Li-ion unit is set to go on sale from September 2018 onwards. The former takes 6-8 hours to charge, whereas the latter takes only 1 hour, both under ideal testing conditions. The scooter has a top speed of 75kmph in ‘Turbo’ mode. You can even switch to ‘Eco’ and ‘Sporty’ modes. The Praise gets gas-charged telescopic forks up front and twin rear shock absorbers. Brakes include a twin-disc setup at the front. The rear also gets a disc with Electronic-Assisted Braking System (E-ABS) for regenerating energy. For a detailed Road Test review, click here.

Twenty Two Motors Flow
The Twenty Two Motors Flow gets a commendable range of 160km from its lithium-ion dual-battery setup. The Bosch-developed DC motor produces a massive 90Nm of torque at 100rpm. This helps propel the scooter to a claimed top speed of 60kmph. The battery can be charged up to 70 per cent in an hour using fast charging. Furthermore, the front and rear discs come with regenerative braking, which recycles 6 per cent of the battery capacity. The scooter is suspended on telescopic front forks and dual rear hydraulic suspension.

The Ather 450 is not only the most expensive but also the coolest scooter on sale today. The company is still expanding and is currently offering its services in Bengaluru only. We are yet to get our hands on the Praise and Flow. But going by the first ride impressions of the Ather 450, we can assure you that it is the most desirable scooter in the market today. It is packed with features, easy to live with, and has the right ingredients to replace the conventional petrol-powered scooters of today.