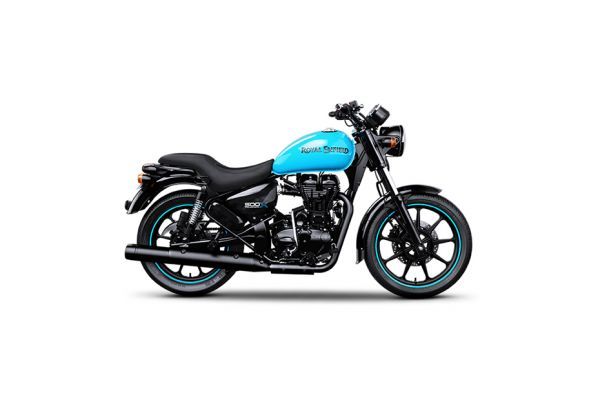 29th November 2018: Royal Enfield has launched the Thunderbird 500X with the safety net of dual-channel ABS. Priced at Rs Rs 2.13 lakh (ex-showroom Delhi), it commands a premium of around Rs 15,000 over the non-ABS variant. The Thunderbird 500X is a modern take on Royal Enfield’s Thunderbird cruiser. The bike stands out from the current pack thanks to blacked out parts and contrasting bright paintwork. Chrome has been given a miss and what you get instead are blacked out components like the engine, exhaust, front forks, rear shock absorbers, handlebar, headlamp cover, meter bezels, mirrors, side panels, tailpiece and the rear grab rail. The fuel tank meanwhile gets a shade of bright yellow and blue options with matching rim tapes on the new alloy wheels that replace the spoked units. It features a single stepped up seat rather than the split seat seen on the standard model. Moreover, the bike also gets new plastic grab rails. The handlebar too is a flatter unit instead of the tall ones on the Thunderbird.The Royal Enfield Thunderbird 500X retains the same 499cc, air-cooled, single-cylinder motor of the Thunderbird 500. It produces 27.5PS at 5250rpm and 41.3Nm of torque at 4000rpm. Suspension duties are handled by telescopic front forks and twin gas-charged shocks at the rear. Anchoring the bike are disc brakes at both ends.At a price tag of Rs 2.13 lakh, the Thunderbird 500X competes against theBajaj Dominar, Mahindra Mojo and the soon-to-be-launched Jawa Perak.

Q. I am in so much dialama to opt between Thunderbird 350X and 500X. I have driven the bike and felt 500 has much more to give than 350 but my concern only started when I heard from some people regarding EFI (peolple have even changed back to carburetors) and fuel pump problems in 500. not to mention 500cc comes with costly spares than 350. Thunderbird is my dream bike so not able to select other vehicles eighter(Himalayan or Interceptor). So please 500 owners can u suggest me which to go for?
Q. I am using Classic 500 for last 4 years, now I want change to Thunderbird 500X or Interceptor 650, which is better for me? View All Answers
Q. Which bike is better for city ride and occasional touring, Thunderbird 500X or Interceptor 650?
Q. As you said, When there will be new a "Avtar" of Thunderbird 350X with more refined engine and many other changes. Of course I am also looking for the colours which are coming in Thunderbird 500X specially the blue one in Thunderbird 350X. Would look forward your prompt & positive response to make my decision.
Q. Is the fuel injection system of Thunderbird 500X as reliable as that from Himalayan?
Q. Me and my son wants to share a bike for occasional biking touring and again occasional city riding experience. Finally we zeroed on on Bullet classic stealth black or Thunderbird 500X. I am 47 years of age with 6.1 height and 89 KG weight. My son 20 years 5.10 weighing around 80, which one we will buy zoncerns 1. Orange colour of 500X at my age 2. Pillion riding on 500X 3. Stealth Black matte black finish durability or whether we'll go for smaller 350 engine ?
More Questions
Q. I am confused about TB 350X and 500X! Both seems same in spec except cc and torque. What would you recommend? Carburetor for 350 and fuel injection 500, so in long run which one is reliable? View All Answers
Q. Hi Guys, I am pretty much interested in buying 350X but need some honest feedbacks from you guys. Should I go with 350X or 500X? Which engine is better Carburetor or FI. Please reply. View All Answers
Q. Which is better between Interceptor 650, Thunderbird 500X and Himalayan for a daily travel of 120to 180km? View All Answers
Q. Which one is better Thunderbird 350X or 500X for regular use and lower maintenance?
Q. What is the Top speed of 500x?
Q. Difference between ABS and STD please - Thunderbird 500X?
More Questions
Thunderbird 500X Questions and Answers