The Mercedes-Benz CLA 200 CDI goes up against the Audi A3 2.0 TDI in the battle of the entry-level diesel luxury sedans. 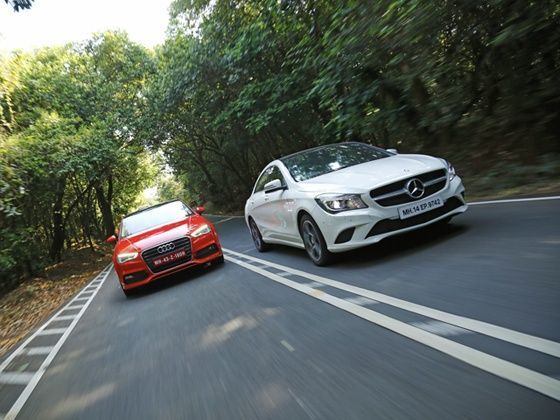 Indians love their luxury cars. In fact, from the time cars were introduced into the subcontinent at the turn of the 20th century, they were lapped up by the Maharajas of the day as a perfect example to flaunt their wealth while also being the perfect tool to survey their subjects and kingdoms. Nowadays, luxury cars are more accessible and one can choose from a whole host of body styles. We have luxury hatchbacks, SUVs etc, but the sedan still rules the roost when it comes to flaunting your hard earned money. And although cars that used to be seen as the entry level luxury sedans have become larger and more expensive over the years, they have always been replaced by more affordable and exciting ones. The Mercedes-Benz CLA and the Audi A3 are the best example of entry-level luxury sedan so it is only natural that we put them up against each other.

If there were ever two cars in the same segment that were designed differently, it is these two. Where the Audi A3 is simple and understated, the Mercedes-Benz CLA is flamboyant and stylish. The CLA with its curves and coupe-like profile is without a doubt the better looking car between the two. With its single slat grille combined with the trademark inverted honeycomb mesh design, it appeals to one on every level. Comparatively, the A3 carries the trademark Audi family language with its large grille trapezoidal and sharp headlamps. Audi pioneered LED daytime running lights and the ones on the A3 look staggering.

Around the back, the CLA excels yet again with its stretched out tail lamps and sculpted bootlid. We also particularly like the sporty bumper with the dual hexagonal exhausts that remind us of the CLA 45 AMG . The A3 on the other hand continues its subdued styling with a simple bumper with a honeycomb inset and twin exhaust tips. The A3 does have really wide wheel arches that combined with the S-line side skirts and the five-spoke 17-inch wheels give it a great stance.

The Mercedes-Benz CLA is based on the A-Class hatchback but that isn’t a bad thing. The circular AC vents combined with the large screen look classy and are finished in really high quality plastic and aluminium. The central console due to the lack of a gear shifter provides a lot of storage space too. What we also particularly like is the way the dashboard is contoured to make you feel as if one is seated deeper into the car. Comparatively, the Audi A3’s dashboard design is pretty conventional. Audi too employs the circular vent on the air conditioning unit with the helpful directional flow feature. We do however like the MMI screen that the A3 comes with that neatly folds down into the dashboard when not needed.

Both the Audi A3 and the Mercedes-Benz CLA are not full sized sedans and thus are quite cramped in the rear. The Audi though feels a little airier due to its larger windows as compared the CLA’s low roofline. The A3 is also more comfortable at the rear due to its larger seats that offer more under thigh support. In fact, the rear seat is really something Mercedes-Benz needs to work on in terms of overall support. The front seats on the other hand tell a very different story. Although the A3 does get a set of comfortable seats, the CLA’s sportier seats are both softer and body hugging at the same time offering a lot more comfort especially during longer journeys.

Both the Mercedes-Benz CLA and the Audi A3 are pretty similarly speced especially on the top end versions when it comes to features. Both get satellite navigation, electrically adjustable front seats and a host of safety features. The Audi A3 also has an additional option where one can specify a touchpad controller for the multimedia interface and a 10GB multimedia hard disk to store music and videos.

Both cars also get an extensive range of safety features like seven airbags, ESP, ABS and EBD. The Mercedes-Benz also gets its trademark pre-safe program that prepares the driver and passenger in a number of different ways if it senses an impending collision.

When it comes to ease of driving the Audi trumps the CLA by a margin. With its larger glasshouse and light steering feel, the Audi A3 is the perfect beginers luxury car for the first time buyer. The Audi is very well damped in terms of thumps and thuds from the suspension passing into the cabin compared to the CLA. The Mercedes-Benz on the other hand feels more comfortable over rougher roads in general but does disappoint slightly when it comes to the amount of sound that filters in. This is mainly due to the updated suspension setup that the CLA uses specifically for Indian roads. Another aspect of the A3 that makes it such an easy car to drive is the all-round visibility it offers. The CLA on the other hand is a little trickier to look out of, especially while reversing. Luckily, both cars can be equipped with a rear view camera.

Handling is where things really start to get interesting. The Mercedes-Benz CLA is based on the highly acclaimed MFA platform, which is possibly one of the world’s best front-wheel-drive setups that your money can buy. The CLA definitely feels more poised and darty into a corner due to its great balance. One does feel the extra 250kg of weight that you lug around as compared to the CLA, but the overall balance that the Mercedes provides compensates for the same. The Mercedes also feels much more controlled under braking especially into a corner.

The Audi on the other hand does feel much lighter to drive both due to its steering feel and its lower weight. The Audi A3, although not exactly a bad handler does not inspire the same kind of confidence that the CLA does. It is essential to add that both these cars have been tuned in terms of suspension setup specifically for the Indian market and thus have a higher ride height as compared to its European brethren. The advantages of course come in the form of better ground clearance which in turn means that both the A3 and the CLA go over speed humps without a fuss.

Gone were the days where front wheel drive was the prerogative of little hatchbacks. Nowadays almost everything is front wheel drive, including these two. The Audi A3 is the more powerful one of the two making 145PS of peak power and 320Nm of peak torque from a 2.0-litre engine. The A3 does feel quite sprightly to drive especially on the highway mainly because it weighs 250kg lighter than the Mercedes-Benz CLA. The 6-speed S-Tronic DSG dual clutch gearbox is a joy to drive and most certainly the better of the two.

Coming to the Mercedes then. The CLA’s 2.1-litre turbo diesel engine might be slightly underpowered at a modest 136PS and 300Nm but strangely you never feel short on power especially if you use the sport mode. Also, as we have mentioned on numerous other occasions, the paddle shift equipped 7-speec DCT gearbox in the Mercedes just feels a tad bit slow and is probably the biggest Achilles heel in the Merc’s powertrain. The Audi then is the clear winner in this segment.

Where facts and figures is concerned, the Audi seems to have the upper hand over the CLA every time. And it is much the same case here too. Not only is the Audi A3 a much cheaper car than the CLA, it is also more fuel-efficient. Where the Audi A3’s diesel range starts at Rs 22.91 lakh for the barebones basic variant, the top-of-the-line variant in ‘Technology’ trim comes in at Rs 31.95 lakh. The Mercedes-Benz CLA diesel on the other hand is only available in two trim levels ranging from Rs 31.5-35.9 lakh (all prices are ex-showroom, Delhi). As we mentioned earlier, the A3 is also more fuel efficient coming in at 20.4kmpl as compared to the CLA’s 17.9kmpl according to ARAI figures making it more effective in the long run.

Picking a winner between the Audi A3 and the Mercedes-Benz CLA is a tough task and one that we much debated on. While the CLA is flamboyant, stylish and young at heart, the Audi A3 offers a more practical, powerful and fuel efficient solution. We also think that both cars appeal to a very different set of audiences. While the CLA targets a younger crowd as compared to every other Mercedes-Benz sedan that is available, the Audi A3 is aimed more at the mature individual who wants something elegant, stylish and yet, understated. Although the Mercedes-Benz CLA lustfully tugs at our heartstrings in a number of ways, the cheaper Audi A3 with facts and figures on its side wins this battle albeit by a narrow margin.

Recommended Variant : CLA Class 200 CDI
Was this article helpful Yes No
Sorry about that