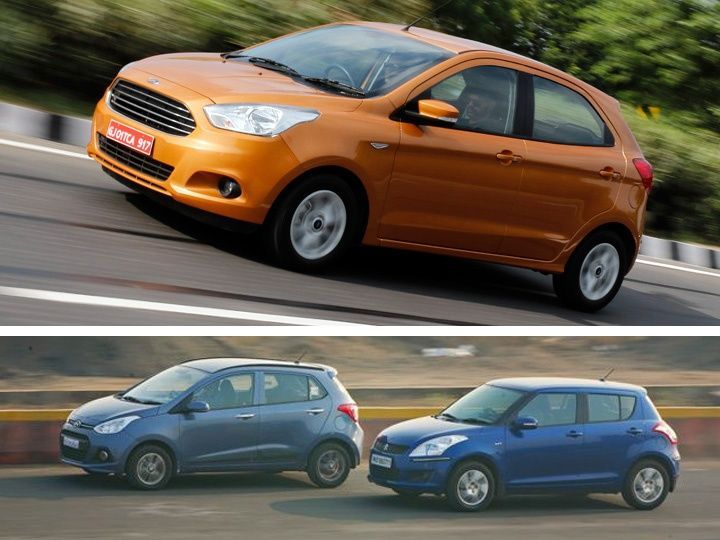 More than 50 per cent of the cars purchased in India come from the hatchback segment. This makes it absolutely important for manufacturers to have an offering in this class of cars. Ford tasted some success when they first brought in the Figo in 2010, but since then due to lack of timely updates, they somehow lost out to the competition. Now, with the new for 2015 Figo here, we try to find out where it stands against the segment leader Maruti Suzuki Swift and the trusted Hyundai Grand i20

The Ford Figo has gone on sale with three engine options – two petrols and a diesel. The smaller 1.2-litre petrol unit comes mated to a 5-speed manual transmission. This engine makes 88PS of power and 112Nm of torque. The other gasoline unit displaces 1,499cc from which it produces 112PS and 136Nm. All of the power is sent to the front wheels with the help of a 6-speed dual clutch transmission. And then of course, there is a diesel, which we expect to be the hot seller. The 1.5-litre 4-cylinder oil burner churns a class leading 100PS and 215Nm and comes mated to a 5-speed manual gearbox.

The Maruti Suzuki Swift too comes with petrol as well as a diesel engine option but doesn’t get an automatic gearbox option. The Swift petrol makes 84.3PS and 115Nm from a 1.2-litre mill. This one too comes mated to a 5-speed manual transmission. The Manesar based car maker also has the famous 1.3-litre diesel unit on offer. This unit produces 75PS and 190Nm. All the power is sent to the front wheels with the help of a 5-speed manual transmission. Maruti Suzuki doesn’t have an automatic option in the Swift.

The petrol Grand i10 makes 83PS and 114Nm from a unit that displaces 1,197cc. On paper this unit is more or less at par with the Figo and the Swift. This one too gets a 5-speed manual transmission. In fact, the petrol automatic too comes with the same engine. The diesel Grand i10 makes just 71PS and 160Nm.

In terms of features, Ford has showed a lot of focus towards safety by installing driver side airbag as standard across all its variants.  From the second ambient trim onwards, the Figo gets dual airbags. Both the other car makers offer airbags only in the top-end trim. All the cars get Bluetooth, AUX as well as USB connectivity. The Figo misses out on button start, parking sensors and rear camera, the Swift misses out on auto retractable ORVMs and the Grand i10 doesn’t get a very informative instrument cluster.

Ford claims an efficiency of 18.16kmpl, 17kmpl and 25.83kmpl for the 1.2-petrol, the 1.5 petrol automatic and for the 1.5 diesel respectively. At 18.9kmpl and 20.4kmpl, the petrol Grand i10 as well the Swift return marginally better efficiency than the Figo. However, the diesel units of both these cars aren’t as efficient and return 24kmpl and 25.2kmpl respectively. The Grand i10’s petrol automatic returns 16.95kmpl, which is almost at par with the Figo.

Just like the Figo Aspire, Ford has managed to price the Figo brilliantly. Pricing the hatchback starting Rs 4.30 lakh, the Figo undercuts the Swift as well as the Grand i10. The Maruti Suzuki offering starts at Rs 4.65 lakh while the Hyundai Grand i10 goes even higher at Rs 4.69 lakh. The story remains similar with the prices of the base diesels as well – Figo at Rs 5.30 lakh, Swift at Rs 5.84 lakh and the Grand i10 at Rs 5.55 lakh. The top-end diesel of the Ford Figo though is the most expensive at Rs 7.41 lakh as opposed to the top end variants of the Swift and the Grand i10 that cost Rs 7.29 lakh and Rs 6.74 lakh respectively. But consider into your calculation that the Figo also gives you leather upholstery and 6 airbags for the premium charged and the extra sum feel worthwhile.  All prices ex-showroom Delhi.