The Kodiaq RS has racked up quite a lot of feathers in its cap. It's the first Skoda SUV to wear the vRS badge and can clock 100kmph in 7 seconds. Is it as impressive in person as the numbers suggest? 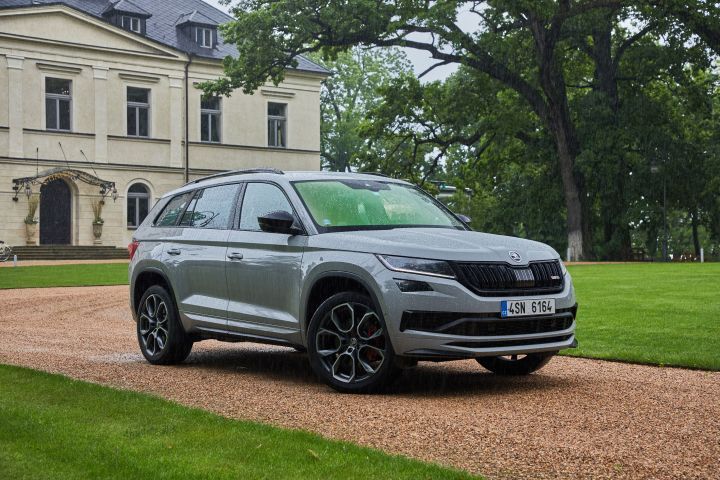 The Octavia RS has been the go-to sedan for enthusiasts across India. Exhilarating performance aside, its most impressive aspect remains the balance it can strike between being a hooligan and a city slicker. The Kodiaq RS, on paper, uses the same formula with an added dose of practicality. It gets a new engine, the most powerful diesel fitted to any Skoda so far. This motor has already made the Kodiaq vRS the fastest 7-seater SUV around the Nordschleife, Nürburgring. Keep your foot down and it’ll help the SUV hit a top speed of 220kmph. But can it strike the same balance as the Octavia? And most importantly, does the everyday performance feel worthy of the vRS badge?

There is not a lot that differentiates the Kodiaq RS from the standard sold in India. But even those subtle differences are enough to make it look distinct from the standard SUV. The RS gets a different front bumper with sharper lines in the air dam. The front grille gets a blacked-out finish and proudly wears the vRS badge. This is an immediate indication that the SUV has some very naughty intentions.

Move to the side and it's hard to ignore the striking 20-inch alloy wheels wrapped in 235/45 profile rubber. It even gets red callipers, which particularly stand out if you have a black SUV. At the back too, you get the vRS badge and a red reflector strip running across the width of the SUV, an element that’s now common on new vRS models. The Kodiaq vRS, with these additions, is surely a head turner as it not only looks sporty but also features distinctive vRS elements that make it rather special.

Inside the Kodiaq RS, things remain quite familiar, albeit, with new clothes. Unlike the SUV sold in India, the Kodiaq RS gets an all-black interior with contrast red stitching. The sports seats wear Alcantara fabric along with the vRS logo on the backrest. Another highlight of the cabin is the flat-bottom steering wheel with a vRS badge and the use of faux carbon fibre elements on the dashboard and door trims.

The cabin reeks of sportiness with the black and red theme. This is also visible on the Virtual Cockpit instrument cluster which gets red dials and a carbon fibre finish in the background, reminding you of the RS' intent. The touchscreen infotainment system too gets a new welcome screen and all these elements together make the experience in the cabin feel more special. But, the most significant tweak in the cabin is a love-it-or-hate-it cheat code - Dynamic Sound Boost. This system amplifies the sound of the engine and the exhaust inside the cabin through the speakers. And in Sport mode, it makes the SUV sounds like it packs V8! In the Eco and Comfort mode, however, the cabin becomes absolutely quiet.

Other equipment on offer include dual-zone climate control, large panoramic sunroof, rear AC vents, electronically adjustable seats, and the In-Car-Communication (ICC) system. The latter uses a microphone to capture what is said by the occupants of the front seats and amplifying it in real time through the rear speakers.

The Kodiaq vRS gets a 2.0-litre diesel motor just like the regular version. However, the vRS is fed by two turbos. Thankfully, it remains butter smooth, free-revving and refined as the regular SUV. Inside the cabin, there is no hint of diesel clatter or any sort of vibrations. Keep it in ‘Eco’ or ‘Comfort’ mode and the engine will quietly tow the car around with no fuss. It can do both city and highway speeds all day long while feeling rather calm and well behaved despite all the badges and Alcantara inside.

But it's when you start getting heavy on the right foot that the Kodiaq vRS starts to show its true intentions. There is a wave of torque available from as low as 1500rpm (max torque is rated at 500Nm from 1750-2500rpm) and the Kodiaq RS is immediate to change pace. Push the throttle pedal harder and a surge of power kicks in and propels you to triple digit speeds instantaneously. But to unleash the true power of the RS, you have to shift to the ‘Sport’ mode.

The moment you do that, the character of the SUV changes entirely. The throttle becomes sharper, the gearbox stays put at higher revs and, as mentioned, the sound from the engine and exhaust gets amplified for a proper sports car ambience. Go hard on the throttle and all the 240 horses come out to play. The acceleration puts you back in the seat and with the 7-speed DSG being as quick as ever, the Kodiaq RS barely loses any momentum during gear changes.

The first gear revs close to 5000rpm and the others shift a little shorter, helping the SUV clock a 0-100kmph time of 7 seconds. To put this into perspective, the Octavia RS was able to hit a tonne in our test in 6.7seconds. Keep your foot down and the Kodiaq vRS keeps going strong till 170kmph with no intention of slowing down. You really need to keep an eye on the speedometer to be aware of how fast it is going. Speaking of slowing down, the brakes feel sharp and offer good and progressive bite as well.

But, and this might feel a little shallow, the SUV doesn't make you feel fast. While it's clocking all these numbers, you feel disconnected from all the drama and don't always feel involved. Don't get me wrong, this is a fast SUV, but because you are sitting high up in a well-insulated cabin, it just doesn't feel that way.

The Kodiaq RS comes with Dynamic Chassis Control, which is fancy lingo for adaptive dampers. And with five modes to choose from - Eco, Comfort, Normal, Sport, Individual and Snow - you can decide how comfortable you want to be, or how planted you want the SUV to feel through a set of corners. The good thing is that the Kodiaq vRS does both very well. In the Eco and Comfort mode, the dampers don't let the surface undulations bother you much and the ride remains pretty comfortable. It's not as plush as you’d find in the standard Kodiaq but it managed to cross speed breakers and a few surface changes with grace.

Switch it to Sport mode and things become different. You now feel what the wheels are up to but not in a harsh manner. The steering inputs feel sharper and the Kodiaq RS now feels eager to go fast. Turn it in at speed and it remains absolutely flat around corners as if it has forgotten about its 1880kg kerb weight. The steering offers good feedback of where the wheels are pointing and it becomes rather simple to keep this behemoth exactly where you want on the road. At first, the steering feels a bit too quick for an SUV but once use to, it feels natural and the capable chassis responds well to quick directional changes.

Then there is the four-wheel drive system which, we are told, can change power distribution in a matter of milliseconds depending on the conditions. It can even send up to 85 per cent torque to one wheel to improve grip around corners. Although the rain gods blessed us with a shower on our drive, it hardly managed to upset the vRS. In our limited time with the SUV, it wasn't hard to understand how it is the fastest 7-seater SUV around the Nordschleife.

THE vRS to go for?

The Skoda Kodiaq vRS has left us very impressed with its capabilities. It can be a calm SUV that can turn into a rocket ship on the touch of a button. But because it is an SUV, you don't feel connected to the performance as the vehicle does most of the hard work for you. And that holds it back from feeling special in a manner the Octavia vRS did. Therefore, what the Kodiaq vRS is, is a fantastic all rounder which can take you and your family with their luggage everywhere fast. But, it just feels a bit shy to be a true blue enthusiast’s car.

In the international market, the Kodiaq RS is priced close to Rs 5 lakh over the L&K variant, which in India is priced at Rs 36.79 lakh (ex-showroom). If the RS does end up on Indian shores, it will be a direct import and would end up costing as much as mid-size luxury SUVs like the BMW X5. As much as we'd like to think otherwise, at that price, badge value matters, so the chances of an Indian launch are bleak. Go on, Skoda, prove us wrong.

The Skoda Kodiaq Will Sport The RS Badge In India...

Skoda Kodiaq Gets A Rugged Scout Variant For Rs...