Choices, choices. Renault now offers the Kwid in almost every flavour imaginable. How do the larger engine and the highly attractive AMT gearbox stack up? 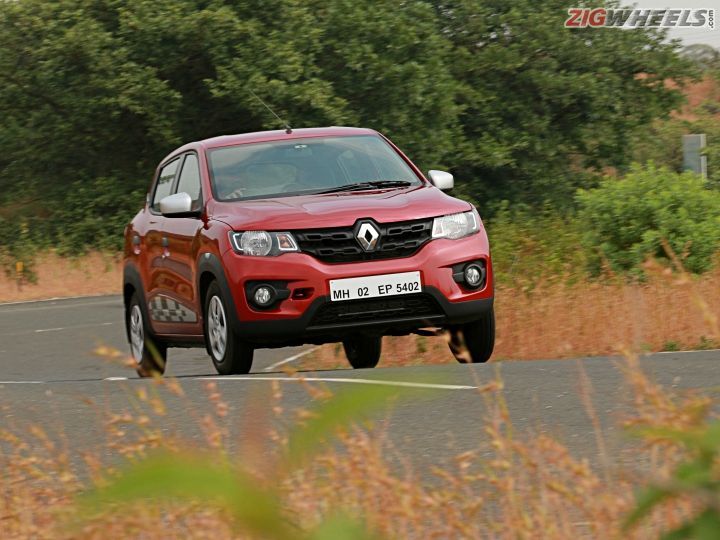 The Renault Kwid is a game changer for the company, that is a well-established fact by now. Indians have been hooked on to this little wonder of a car which offers a unique design, features and great space at prices on par with the competition, mainly the Maruti Suzuki Alto/Alto K10. While we got our hands on the 0.8-litre Kwid a long time back, we had not put the Kwid 1.0 and the newer Kwid 1.0 AMT through our tests. We have had them for over three weeks and this is our review of both the cars.

The bright blue-and-orange car you see is the Kwid Climber limited edition powered by the 1.0-litre SCe 3-cylinder petrol engine paired to a 5-speed manual transmission. The Maroon, blink-and-miss-the-difference car, is the (on paper at least) highly desirable 1.0-litre SCe powered AMT version.

The Kwid is a familiar sight on Indian roads by now; the familiar SUV-like stance, high ground clearance (mm unladen), large lights, short overhangs make the car look quite unique in this segment. The design has aged well; it has been over two years since the car was launched but the Kwid still garners appreciative looks from time to time.

You may get more attention if you’re sitting in the brightly coloured Climber edition though. Apart from the very noticeable blue-and-orange theme, the Kwid Climber also gets new black cladding around the fog lamps, faux silver skid plates with orange accents at the front and rear, orange indicators on the front wheel arches (standard car has a clear cover) roof rails with orange highlights, two-tone black-and-orange ORVM covers, large ‘Climber’ stickers and what look like alloy wheels.

Yes, the Kwid Climber does not get alloy wheels. These are steel wheels with 6-spoke full wheel covers! The design is so clever that you’d not realise these are alloy wheels till you knock on the wheel covers and hear a familiar plasticky sound, the design had many of us fooled.

In stark contrast, the only indication on the outside that the maroon car is an AMT is the small ‘Easy-R’ badge on the bootlid. The good news is that the Climber variant is also available with the AMT gearbox.

The story continues on the inside, the Kwid Climber’s interior is more exciting, with orange highlights on the seats, dashboard, door pads and the gear lever along with the Climber badges placed on the steering and the front headrests. On both cars, the interior design and space are no different from the variants powered by the 0.8-litre engine.

The design all around is pleasing to the eyes and the materials used seem on par with other cars in this segment. The highlights here, of course, are the two large digital screen; a 7-inch touchscreen infotainment system on the centre console and the all-digital instrument cluster behind the steering wheel.

The Kwid AMT has a slight advantage over the manual Climber because of the unique way its gear selector is placed. Unlike other cars in its segment, the Maruti Suzuki Alto K10 and the Tata Nano, the Kwid uses a rotary knob placed on the dashboard instead of a gear-lever extending from the floor. This gap on the floor frees up enough space to have a 1-litre bottle holder, which is nice considering the door panels are not wide enough to hold any. Other convenience-enhancing storage spaces include two lockable gloveboxes, map pockets on the front doors and a best-in-class 300-litre boot.

The feel-good factor inside could have been improved if Renault had taken a little more effort in quality control. Three big things stand out: the A/C vents require a lot of effort to operate but feel flimsy at the same time. The rear seatbelts are not retractable units, adjusting them each time a new passenger sits at the back is not as easy and could discourage their usage altogether - making it less safe for rear seat passengers. The AMT control knob is not well weighted and does not seem to have proper stoppers in the Reverse, Neutral and Drive modes; this can lead to unintended gear changes as we found out.

Both the Kwids here are powered by a 1.0-litre (999cc), three-cylinder engine - the engine block is the same as the 0.8-litre unit but has been bored out for the increased capacity. The Climber features a 5-speed manual transmission while the AMT gets the same 5-speed unit with an electronically actuated clutch and shifter.

As is the case with three-cylinder motors used in other small cars, the 1.0 SCe engine never really settles down, though the vibrations are less intrusive once on the move. Progress is smooth from standstill but the engine never feels especially fast. Even though this engine may have a power and torque bump, of 14PS and 19Nm respectively, these are still developed at a higher rpm - pottering around the city requires constant gear shifts. The good thing is that the engine doesn’t protest if you keep the accelerator pedal pinned to the floor, with the car gaining speed close to its redline.

Shorter gearing could have helped the Kwid overcome its low-end torque problem, but it would have also reduced its highway driveability and the mileage in general. Both the manual and the AMT feature long gear ratios, though the AMT offers you the convenience of not having to shift the gears yourself. Depending on your personal tastes you may or may not like the AMT.

The EasyR AMT is not the smoothest AMT in its segment, the clutch and transmission are noisy and jerky at low speeds. Things do improve with speed, but the whole point of the gearbox is to help you drive comfortably in high traffic situations in the city. If you can live with the headbanging motion during gearshifts at low speeds, the Kwid 1.0 AMT is manageable at best in the city. The manual transmission, on the other hand, is mostly fuss-free. The gates are clear and help slot in the gear easily, the clutch is light adding to the ease of shifting gears but you do need to shift gears to keep pace with traffic at lower speeds which may prove tiring on a long commute.

The AMTs slow shifting nature shows up in our instrumented performance tests, the AMT took 3.5 seconds more to 100kmph as compared to the manual Kwid. The AMT, contrary to manufacturer claims is also thirstier than the manual; this can be attributed to the unit refusing to shift up before a set RPM limit (there is no manual override in the Kwid unlike the competition). While a mileage of 16.28kmpl in the city and 20kmpl on the highway is not bad, the Kwid Climber manual managed 19.09kmpl and 23.02kmpl respectively!

The Kwid is happiest at low speeds; the suspension is set up for comfort and soaks up bumps very well. Only the toughest of speed breakers in Pune could get the suspension to issue a warning thud. The steering is small and light, aiding easy manoeuvrability in the city. While the unit does weigh up with speeds, it remains vague at speeds over 100kmph. High-speed stability is not helped by the soft suspension which causes the car to float over bumps and the skinny 155mm-section tyres which skip over undulations.

The Kwid is also not designed to be a ghat section hero; the car rolls into corners, the electrically-assisted steering needs constant adjustment and sudden directional changes can unsettle the car easily. The tyres, combined with how the suspension is set up for understeer, means that it is best that you take corners at sensible speeds.

The biggest problem driving the Kwid at high speeds are the brakes - there is no ABS. While the Kwid is offered with a driver-side airbag in the (O) variants, no variant is offered with ABS. The Kwid AMT took just over 53-metres to stop from 100kmph while the Kwid Climber travelled over 57-metres before it could come to a dead halt. To put that into perspective, the next greatest distance ever recorded in our tests is at 53-metres in the rain. It is best to drive these cars at lower speeds where the tyres will not lock up under panic braking.

When it comes down to making a buying decision the Kwid AMT does battle with the Maruti Suzuki Alto K10 and the Tata Tiago AMT. The Alto K10 is both cheaper and has the smoother AMT transmission in town but lacks the passenger and luggage space of the Kwid. The Tiago offers more space and better performance but is dearer. The Kwid scores points with its fancy touchscreen infotainment system and digital instrument cluster and occupies a safe middle ground between the two, that is, If you can live with the flaws in its AMT transmission.

The Kwid Climber, on the other hand, offers a good looking package from the factory with a powerful-and-efficient engine, easy in-city driving dynamics and comfort. This is a car for those looking for the more stylish Kwid and there’s nothing to discourage you from buying it if your heart’s set on it.

Recommended Variant : KWID 1.0 RXT Optional
Was this article helpful Yes No
Sorry about that