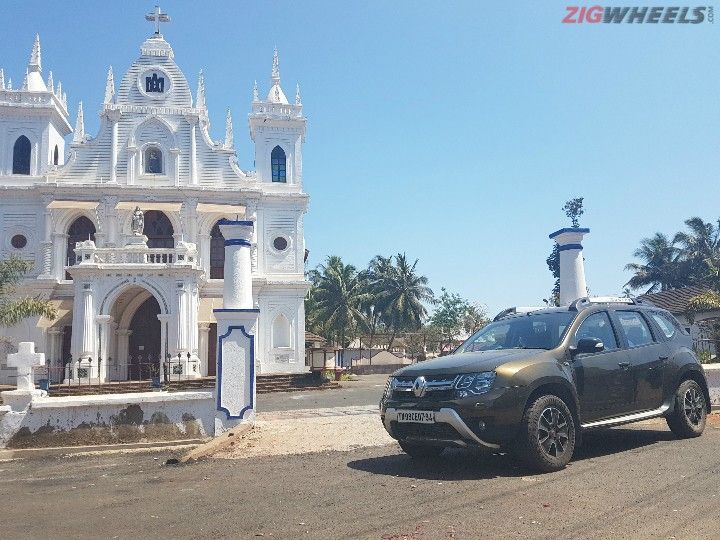 “Who goes to Goa in summers?!” - my friends cried out in unison when I floated the idea of a road trip to them last month. “Besides, five of us can’t travel in that piece of junk,” they said referring to my ratty old Santro.

They had a point. A long-distance road trip calls for a car that’s spacious, comfortable and, if you have women in your gang, can also take in large suitcases. #RIPTravelLight

“How about the Duster?” I shot back with a smug look on my face.

The Renault Duster AWD had recently joined the ZigWheels long-term fleet and I had my sights on it even before it had arrived. But then so did all my colleagues! However, as is customary at ZigWheels, senior members of the team get to call dibs on a long-term car first. In this case, Abhay promptly raised his finger (nope, not the one you are thinking) and everyone’s faces dropped. The good friend that he is, I asked Abhay if he’d like to trade the Duster for my Tata Zest AMT long termer. In return, I promised to bring him back some of Goa’s famed cashews. Fortunately, he obliged but asked me to drop the cashews for a bottle of cashew-based beverage (if you know what I mean).

I thanked the big man and set off on my journey. The Duster AWD that came to our office is the facelift version that was launched last year. Updates are subtle but relevant enough for the Duster to chug along for another year or so before a new-gen model arrives. I particularly like the treatment given to the headlamps and taillights. The Duster’s biggest strong point, though, is its brilliant ride and handling dynamics - one of the reasons why I wanted to take it on a road trip. Here’s what I thought of the popular SUV, over my week-long trip.

The Duster AWD’s 410-litre boot is 65 litres lesser than the FWD version owing to the spare wheel being placed inside the vehicle. In the FWD version, it’s under the car. Despite the lesser space in the AWD, we had no trouble packing in all our luggage. The picture below speaks volumes about the Duster’s boot capacity.

Over the 1600km long journey from Pune to Goa and back, I began to appreciate a lot of the convenience features in the Duster AWD. The driver-side armrest, for instance, helped keep a lot of the discomfort out of the driving. And I realised how much of a blessing simple features such as the auto up/down button for the driver-side window are. Maharashtra probably holds a Guinness record for the most number of toll booths in the state. Fortunately, the auto up/down button made the frequent stops at the booth less tedious. The automatic climate control also does a good job of cooling the cabin despite the absence of rear AC vents. However, there was a strange whirring noise coming from the front vents, which again, strangely enough, went away on its own after a while.

This is the single-biggest reason that will make you fall in love with the Duster. The route from Pune to Goa has a mix of wide open highways, narrow single-lane roads and ghat sections. While roads are mostly smooth, the Duster had no trouble gliding through the occasional poorly tarred section. Even larger potholes were dismissed without shaking up the cabin, and my friends at the back were comfortably snoozing away to glory! Body roll is within acceptable limits too while on highways, the Duster feels rock solid. To top it all, the 1.5-litre diesel motor has plenty of power on tap, and it always bailed me out whenever I was stuck behind slow moving traffic.

Goa is among the few places where diesel costs more than petrol, discounting any gains of driving a diesel. Even then an overall mileage of 14kmpl wasn’t all that bad considering we drove a full house and that too with a boot loaded with luggage.

Of course, there were a couple of things that I wish were better. For instance:

Our Duster facelift came in Woodland Brown, which isn’t the most flattering shade and, in fact, adds to the SUV’s age. I wish Renault had sent us one in Cayenne Orange, which looks a lot fresher and eye catchy. Besides, the photos would have turned out better!

While the infotainment system pairs with the phone over Bluetooth effortlessly, there seems to be an issue with the microphone. Almost everyone I connected with over the phone complained of the poor call quality, which was annoying. Also, the USB port takes ages to charge the phone as it isn’t a fast-charging unit.

The Duster’s rear bench is a comfortable place to be in, but not so much for the middle-passenger. While it is tolerable for shorter commutes in the city, during our trip there were frequent squabbles at the back as to who will sit in the middle.

On the whole, I was thoroughly impressed the Duster on the highway. At the same time, I am convinced it is great as a practical everyday SUV for the city too. It is just the right size to bully your way through traffic and still not be a parking nightmare. And as aforementioned, the ride and handling dynamics are brilliant and comparable to that of more premium SUVs. The Duster AWD long-term will be with us for some more time and I can’t wait to take it for another spin, this time to the hills perhaps.