Can Nissan's new SUV, the Kicks, succeed where it's platform sibling, the Renault Captur, floundered? Can it take up the urban SUV mantle from Hyundai’s Creta? 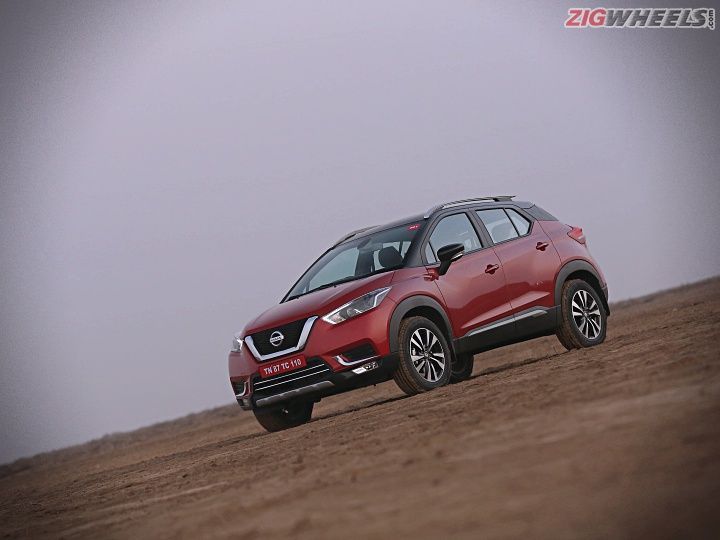 Hyundai's Creta has defined the mid-size SUV segment in India, which is well suited to the urban landscape but makes for a great traveller too. Renault Captur tried to topple the Creta with Parisian panache wrapped around a tried-and-tested platform (the Duster’s). All this is relevant because Nissan’s new Kicks shares the engine and mechanicals with the Renault. So, how has it used the additional year to prepare itself as the premium SUV of choice for car buyers across India?

Head-on, the Nissan Kicks will seem a lot like a traditional SUV. The upright nose with the Nissan V-grille and the wide rectangular forms for the headlamp, foglamp and airdam make it look blunt in a cool way. But as your gaze sweeps further back, you realize that the Kicks takes on a sleeker form, looking long and low. The sloping hood, the sharply raked windscreen and the sloping rear screen give it a low-slung stance as it stretches over a 2673mm wheelbase, which makes it longer than the Creta by about 80mm. Also, on paper the Kicks humbles the Renault Captur’s overall height of 1636mm by 20mm, it is undoubtedly the chunky roof rails up top that would have to take some of the credit. Have no doubts, the Kicks’ 17-inch dual-tone alloy rims, the 210mm of ground clearance and class-topping overall length of 4384mm offer a lot to look at and boast about.

So, Nissan’s Kicks won’t fit into the square SUV template that most Indians look for, but it has a sense of sophistication and individuality that make an impression. The discreet use of chrome around the grille, fog lamps and in the headlamp housing increase the sense of premiumness. Viewed from the side, the chunky roof rails will get your attention too. These help make the Kicks look taller than it is, and can be used to carry 100 kilograms of load as well! You will be fascinated by the interplay of crisp but subtle lines that flow down the side too. Swing around to the rear, and it is the boomerang-shaped tail lamps that stand out. The “fanged” portion of the design makes you believe that the boot gets a jagged opening! Thankfully, that “fanged” bit is actually pasted onto the tailgate!

How does the Kicks plan to hook you? The premiumness. When it comes to quality, the Kicks sets a benchmark that outclasses the Creta by a considerable margin. The grain for the plastics, the leather used on the steering (which has a hint of being flat-bottomed) dashboard and door pads look and feel like it was built for mainland Europe. The contrasting tan and black leather used in the cabin makes it look quite special. Interestingly, the leather-wrapped portion of the dash is offered in another finish that gives a more youthful look. The design also adds to the sense of sophistication. Used with discretion, the chrome and silver accents around the cabin lift the ambience. Standing proud, the 8-inch screen on the centre console seems to have the dash spreading its wings around it. Then there are the bits that you can’t see, but you can feel; like the horn, it sounds very European-spec! There is one more aspect that wows you, more on that when we get going. In terms of space, the front seats feel sufficiently spacious and supportive.

However, there are a few misses. Although height adjustable, the driver’s seat is set too high, and that makes the seating position feel a bit awkward. The footwell is also cramped and there is no place for a dead pedal. Also, the driver’s instrument cluster looks a bit awkward as the analogue dial on the right houses only the fuel gauge, all other information is packed into the display between the two dials. The air-con system and the engine start-stop button look all too Renault.

Step into the rear and you will see that the plastic used for the air-con console mounted between the front seats looks a bit tacky. Also, the absence of USB ports for the rear passengers is glaring, and so is a slot to stow your phone. While these could be treated as niggles, the somewhat tighter than expected cabin-width is the real stumbling block. The window opening that narrows gradually towards the rear also eats into the sense of space. The firm cushioning for the backrest makes it seem all the more austere. Given that knee room and headroom is adequate, passengers wouldn’t mind hopping in for short jaunts around town, but they won’t take kindly to it for longer weekend trips. However, the 400 litres of boot space will be handy then.

Calling the features list as a sidekick isn’t really fair as the hardware that slogs away underneath. Many of the features listed here would be considered essential, and some good to have. The standout feature on the Kicks is a 360-degree camera that gets feeds from cameras in the grille, under the wing mirrors and the rearview camera. So, parking in tight spots gets easier still with the Kicks. However, the resolution from the cameras is passable and the images tend to get grainy when used at night.

The 8-inch display that beams you these images has no such trouble. It is bright and reasonably snappy as you tap your way through Apple CarPlay, Android Auto or the Wi-Fi hotspot. The steering wheel might look like it only packs switches for cruise control, but the essential telephony and music controls are on the stubby stalk behind the steering wheel. This feature, seen on Renault’s, is a bit tricky at first as the stalk is hidden from view, but proves to be very intuitive to use soon after. The Kicks packs in a lot like automatic air-conditioning as standard, rain-sensing wipers, automatic headlamps, fog lamps with cornering functionality, smartcard for keyless entry, seat height adjustment for the driver’s seat and front and rear armrests.

However, there are some oddities. For instance, the front armrest is shaped such that it is better for the front passenger to use, rather than the driver. Also, the slot to stow the smart card is in the glovebox. In terms of safety features, the Kics packs four airbags, anti-lock braking system (ABS), stability control, electronic brakeforce distribution (EBD), and brake assist (BA) as standard. It also offers hill start assist to make starting off on inclines easier. The key misses here are auto-dimming IRVM and the highly sought after sunroof.

Not quite. The Kicks is going to be offered with a choice of two tried-and-tested 1.5-litre engines - a petrol and a diesel. For now, these are offered with manual transmissions only, a 5-speed for the petrol and a 6-speed for the diesel. The petrol will get a CVT automatic transmission later. On the drive, we only had the diesel to test, and it made a great impression as soon as we got going. The absence of the usual clatter associated with diesels boosted the sense of luxury in the cabin right from start up. Nissan seems to have added an extra layer of sound deadening to keep the Kicks’ cabin nice and cocooned.

This K9K engine is great for cruising on highways while sipping on fuel, and it feels no different here. However, for overtakes, you do need to shift down to get it going. It is in the city that you need to work the gearbox more as the engine lacks the punch at low rpm to keep pace with traffic. On our drive, the clutch felt easier on the calves than I remember it to be, which is a bonus. As on the Captur, the Eco mode dulls throttle response and makes for a less spiky power delivery, and should improve fuel efficiency. As of now, Nissan has not released any official fuel efficiency figures.

The front independent suspension setup and twist-beam rear, although similar to the Captur, seem to have been tuned quite differently. At low speeds, the Kicks walks like a ninja on the prowl. It's padded paws fall softly and carefully, distancing you from the road's roughness. This further builds the Kicks reputation as a relaxing companion for the daily commute. As speeds rise and the roads get winding, the Kicks is sprightly on its feet, but the numb steering cools the mood a bit. So don’t expect the Kicks to pirouette around hairpins or arc through corners with an invigorating hai-ya. It tackles all these and long highways with a composure that makes it calming rather than exciting. At higher speeds, it can feel a bit softly sprung, but it doesn’t feel sloppy at any time and continues to instil confidence even through the bends. One area where we would expect some improvement are the brakes, these feel quite wooden and demands a strong shove when a light tap should have done just fine.

So Nissan’s new Kicks has played the premium card to shake up the compact SUV segment. The Kicks shows that Nissan has gone the distance to make sure it feels the part too, and not just looks it. In the cabin, the Kicks seals this tag with the impressive materials and features. However, the lack of an automatic transmission option and the tighter than expected sense of space in the cabin shrinks the Kicks’ appeal to some extent. And, no doubt the Kicks is a striking looking machine, but its crossover stance dims its allure further.

But, with prices starting at Rs 9.55 Lakh, ex-showroom Delhi you would be willing to look past somethings. After all, it is well equipped from the base XL variant which is available in petrol and diesel. The range-topping XV Premium + is priced at Rs 14.65L, which is available only in diesel. The 3-year warranty, 3-year 24x7 roadside assistance and 3-year service maintenance which is included at no extra cost make the Kicks seem like even better value. So if you decide to indulge in Nissan's  Kicks, all this makes it a very sensible option.