MG’s Hector Plus has three rows, six seats and some trifling changes. Does it add up to more than the sum of its parts? 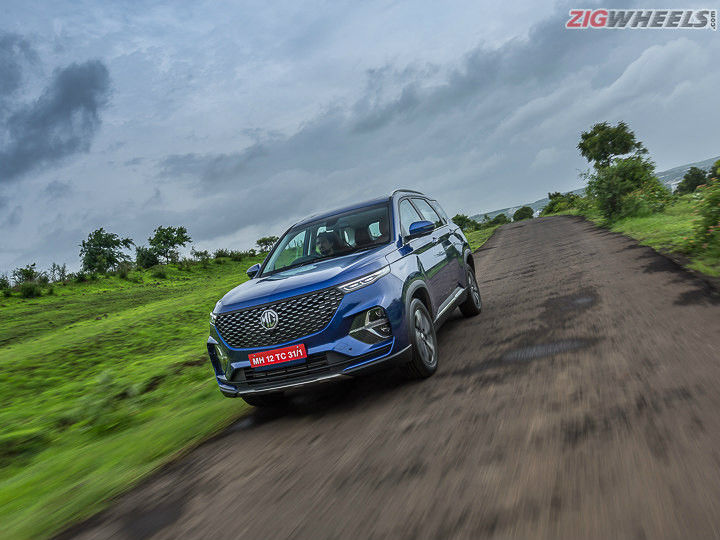 Blame my poetic license, but the design differences didn’t gel well with our theme there. You see, there is more than one change: the front and the back. Fine, there is more! The face is more expressive as the LED DRLs are angrier and have eye-like detailing; the headlamp unit sits lower down but looks neater.

The fog lamps from the main lights are now separated by the swipe-style turn indicator. The XL-sized frameless grille feels in-your-face yet restrained, probably thanks to the minimal use of chrome.

Jump around to the other end and you’ll see a less jazzy design. The sheet metal for the tailgate features a prominent and crisp crease under the rear windscreen.

The turn indicators use stacked LED strips, light swiping through them to create a downward flow. It is pretty and cool, except the innermost elements do not light up, which, at first, makes you think that something isn’t working.

The redesigned bumper looks bulkier and has larger and smarter faux exhaust tips. Despite this, the exercise feels a bit pointless as the actual exhaust can be seen dangling underneath quite easily.

The added bulk of the bumper stretches the Hector Plus’ overall length by 65mm over the Hector. In every other way -- width, height and wheelbase -- the Plus is on par with the Hector. Sadly, that applies even to the wheel size: the 215/60 R17 tyres look plain embarrassed to be propping up a vehicle of this size. But surely, no Hector Plus owner is going to feel poorly about his vehicle’s swag quotient as it betters the Hector.

Even the interior looks different!

Don’t get all heated up. Yes, the cabin looks different, but that’s because of the tan colour used for the faux leather that wraps the seats, bits of the dash and the door pad. The design for the dashboard and the seats are the same. Which also means 5’6” drivers, or shorter, will still find it difficult to find the right seating position because of the combination of the limited rake adjust and the tilt when raising the seat height.

On the upside, the generosity and length of the feature list is identical to the Hector too. The top end Sharp variant packs the panoramic sunroof and 7” colour display for MID. The lower Smart variant continues to offer the impressive Infinity sound system that uses 8 speakers, a subwoofer and amplifier. Incredibly, the Super variant (one above base) offers the 10.4” touchscreen with Android Auto and Apple CarPlay!

The Chit Chat function which was introduced to the Hector via an OTA Update has been brought to the Plus too. On a terribly lonely journey this feature can give you a sense of companionship as the car computer will pay you a compliment or share some clever quips when prodded correctly. In case you were wondering, there is no wireless charger for your phone, or ventilated seats, or sunblinds for the large windows.

We never complained about the lack of space in the Hector and now with these sliding seats there’s acres of kneeroom on offer. You can stretch out and recline and the body hugging (in a good way) captain seats will hold you in place better, making longer journeys less tiring. Despite the sunroof there’s enough headroom on offer for taller passengers too. So if you plan to be chauffeured around, the Plus would be quite the ride for you. However, MG missed a few tricks. Firstly, a higher hip point would have helped improve under thigh support, which was lacking even on the Hector. Secondly, there are no cup holders for the second row. No place to put your cup o’ tea. How inconvenient, old chap!

It is great to see that MG has offered three-point seatbelts and adjustable headrests even for the third row occupants. Given the amount of width, kneeroom and headroom on offer, adults can be accommodated here easily,  but the lack of underthigh support would make longer journeys tiresome. You will also feel a bit cooped in as the view out of the quarter glass isn’t very helpful since you sit quite low.

You won’t have to look hard for conveniences as there’s a USB charging socket, cupholders, a five-speed blower, and dedicated air-con vents for both occupants. Keep in mind, though, that the location of the vents and how they open and close will make directing air where needed will be a little tricky. However, there’s no doubt that the third row makes the Hector Plus a more practical and comfortable option for five when compared to the Hector.

… underneath the boot with your foot is quite fruitful as it gets the powered tailgate to open up.

155 litres of storage with the third row of seats in use allows you to pack in a small suitcase and a couple of softbags. Revenge shopped? then just flip one of the seats down, no problem.

If it is an airport run (that day will come again) then flip both seats down to get 530 litres of boot space. Sure, the Hector’s 587 litres is more, but given the shape of the boot and the ease of access, the difference in terms of practicality is very little.

Our experience with the 2-litre diesel with the 6-speed manual transmission suggests that the Hector Plus drives just like the Hector. This 170PS engine is punchy and easy to drive, making for a great all rounder. However, this Fiat-sourced drivetrain can be experienced in a more polished avtar in other vehicles. You could look past the clunky gearshift, and the somewhat heavy clutch pedal, but the engine’s tendency to stall when moving off the line is annoying.

The Hector Plus shares the Hector’s ability to smoothen out rough roads with ease, making it quite apt for Indian roads. Its tendency to roll, owing to its considerable size and weight, will make you question the Hector Plus’ manners and composure, but if you drive in a measured manner you’ll see that distances can be covered confidently and comfortably. This is a result of the good grip from the tyres, all-wheel disc brakes with ABS+EBD+BA, ESP, TC and Hill Hold, all of which is offered as standard. Much like the Hector, the Plus offers six airbags on its top end variant.

Quite simply, the Hector Plus makes sense. The three row and captain seat configuration improves the premiumness and practicality of the Hector sufficiently. Its personality has been subtly, but surely, tweaked to appeal to more people too. Had it packed larger wheels and tyres, an automatic transmission for the diesel, better engine refinement and ergonomics, the Hector Plus’ appeal would have been cemented solid. However, MG is tempting buyers to jump ship from the Innova with its  price tag. Whether it can better the Innova is a question that we aim to answer shortly. For now we can say one thing with surety: if you were thinking about a Hector, Plus is the way to go.