Seems like Toyota has stumbled upon the missing mojo and has injected a massive dose transforming the humble Innova in to a fashionable new Innova Crysta. But should you buy one? 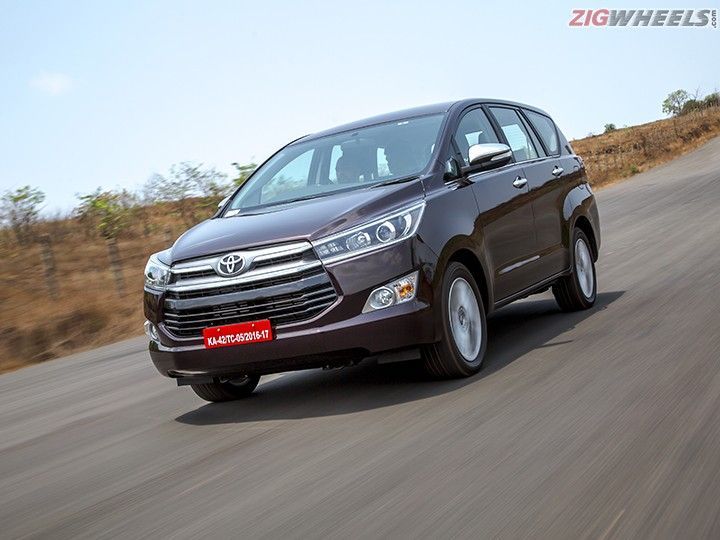 We’ve all owned a Toyota Innova at some point of time in life… some even for a couple of hours for that trip to the station or airport. Not surprisingly, there are over 6 lakh Toyota Innovas plying around in our country, making it India’s favourite MPV. This despite the fact that in the last 11 years of its existence, Toyota has given it a major up makeover.

So it’s about time Toyota takes the MPV game to the next level with the brand new Innova Crysta. With the new upmarket model, Toyota is not just aiming at premium car buyers but is also hoping to be the upgrade car for the vast Innova owners of India.

As we had seen at the 2016 Auto Expo, the Innova Crysta is longer, wider and taller than before. There's even a glimpse of the new Corolla Altis and Camry. Giving it a distinct face is a massive hexagonal grille and these chrome slats that merge with the double-barrel headlamps.

Wide shoulder and narrow waist - these sharp creases that fade away towards the end like an artist’s brush stroke. Smaller details like these aero-stability wings improve high-speed stability, and higher variants come with a set of good looking 17-inch wheels.

The last set of glass window near the D pillar is razor sharp, giving the side profile a distinct look. Just like the saber-tooth inspire taillights do to the rear design. The Innova has more road presence now and makes a stronger statement. But maybe, just maybe there is an overdose of bling for some, which might divide opinions about its design.

As you get in the car, the interiors will wow you! New materials, colour combination and multiple layers make you realize how drab the older one was.

There’s ambient lighting, dual zone climate control and 7-inch audio system with navigation. Toyota terms it to be the most feature packed MPV on sale in the country. The driver’s seat is large and well bolstered, making it apt for long distance touring.

In higher variants the driver's seat can be electrically adjusted, and there’s a meaty leather wrapped steering wheel with plenty of controls and a separate stalk for cruise control… but thankfully ABS, EBD, Brake Assist and airbags come as standard in all variants.

The AC vents are higher up, while the rest of the buttons and infotainment system are positioned conveniently, within reach. The new touch screen acts like a display for the rear camera and also has tons of features, fuel economy calculator and trip meter. We wish the touch could have been more intuitive and rear camera display to be a tad sharper.

The soft top of the dashboard feels great, faux wood tries to add a premium touch, while the shiny hard plastic at the bottom looks out of place in this otherwise fancy cabin.

Plenty of smart engineering make the Crysta’s cabin ideal for long drives. So, you get cooled glove-box, a couple of cup-holders that slide out in front of the AC vents to keep them cool, and no less than 20 bottle-holders! Surprisingly, for a cabin this smart there’s just one USB charger and 12v power output socket.

Open the rear doors and you’ll be welcomed by faux wood trims on the door panel, which missing is on the front doors. The seats are a lot more comfortable and seem to be borrowed from a premium sedan. Clearly the focus has now shifted to the rear seats, where majority Innova owners sit.

There’s a foldable table and a button to slide forward the front seats even from the second row. Jutting out of the ceiling are the climate control rear coolers surrounded by ambient lighting. This definitely is the best seat to be in.

One of the biggest improvement has to be the 1-touch-tumble second row which is just so easy to use. The Crysta is larger than the Innova, but the wheelbase hasn’t changed. So, the cabin space is pretty much the same as before. Inspired by aeroplane seats, Toyota has used new-age foam which is sleeker, offers good support and carves out more room in the cabin. Which can be seen on the third row. Although you have to be seated in a squat-like position, it’s better than most other MPVs available in India. Interestingly, all 7 passengers get 3-point seatbelts, including the third row occupants.

The slit third row can be folded individually with equal ease to create space for luggage. And another premium touch is the easy close boot lid, which doesn’t need to be slammed down like other MPVs.

Toyota has brought entirely new engine options on the Innova Crysta. We started with the 2.4-litre diesel motor which is offered with a 5-speed manual gearbox. In-spite of being smaller than the older 2.5-litre engine, the modern four cylinder turbocharged motor has more grunt and is also more frugal. But like the older engine feels not very refined. Just notice the gear lever do the Shake while cranking up the MPV.

Once in motion it settles down and has good mid- and top-end power. Rev it harder and the motor gets audible and stressed, forcing you to shift to the next gear before reaching the redline. At 149PS, it produces a stunning 49PS more than the outgoing Innova which is evident right from the word go. There is more than ample torque at 343Nm which comes handy while over taking other cars, even when the Crysta is packed to the brim with passengers and luggage.

But the clutch still has a long travel… a compromise you pay for durability. The gear stick is shorter and more car like now, but an averagely built Indian will have to stretch a little to reach the gear-knob when it was slotted in third.

The 5-speed manual gearbox has better spread ratios now, which means you can quickly shift to fifth and cruise on the highway. Having said that, having a sixth gear would have kept the engine even less strained during long distance journey.

Toyota engineers spoke about improved sound insulation, but still there is a fair amount of road and engine noise which can be heard within the cabin… yes, even with the windows up. You also get 3 driving modes – Normal, Eco and Power. As the names suggest, Power has the best accelerator response, Eco can squeeze maximum out of a litre of fuel and normal gives you best of both.

The other engine option is for those looking for more convenience and opulence. This is also a brand new motor - a 2.8-litre turbocharger with a 6-speed automatic transmission. Currently this is the second MPV, after the Maruti Ertiga, to come with an automatic option in India.

After a long day of driving and photoshoot, we couldn’t have asked for anything better - driving back in this automatic car, through the busy streets of Goa. With 174PS power on the tap, it really quick off the line and feels quite spirited for an automatic car. There a massive 360Nm of toque which starts to flow really early in the rev range giving the Crysta automatic creamy power deliver. There’s hardly any turbo-lag and the gearshifts are linear, making it perfect for city use.

There are no paddle shifters on the steering wheel, but you can still control the gears using the manual mode on the gear lever. It’s not as engaging to drive as the manual, but way more effortless.

Similar to the older Innova, the Crysta employs a ladder on frame chassis, so don’t expect monocoque like dynamics. But use of rigid - high tensile steel has kept a check on the weight. This setup along with larger rear shoc absorbers make the Crysta iron through even crater like roads. The ride quality for a MPV of this size is seriously impressive and the biggest strength going by the road conditions we encounter everyday. The suspension almost never bottoms out, and goes over rumblers and spead breaker as it they never existed.

It’s a big car and the steering feels heavy specially while taking a U-turn. This is probably to keep the steering communicative and fairly direct, but at higher speed it becomes both lighter and inconsistent. Moreover, it still has evident body-roll though the engineers have tried to control the sip like pitching movement to certain extent. Obviously, smaller MPVs available in India feel more nimble and agile, but the Innova Crysta is clearly more composed and sure footed.

Despite of being a rear wheel drive and powered by a massive engine the Innova Crysta doesn’t attempt to be the most fun car you’ve ever driven – but it delivers the promise of comfort, convenience and peace of mind. On top of that it’s makes the old car look like 80’s suitcase, has more features than a Swiss army knife. With all these additional features and styling, the new Innova Crysta demands a premium over the older model. So the base variant of Toyota Innova Crysta starts at Rs 13.84 lakh, while the top-end trim costs Rs 20.78 lakh (Ex-showroom, Mumbai).

About 11 years ago, when the Innova was first introduced in India, car buyers were wary and wondered why a great car like the Qualis has been replaced by this? But with time the same people made the Innova the top selling MPV of India. Over the years the price of Innova kept increasing but the sales charts showed no signs of slowing down.

We won’t be surprised if people react the same way with the new Innova, and hopefully the new Crysta will carry forward the legacy of being another bulletproof product from Toyota. The other problem is that in spite of so many new MPVs flooding the Indian market, none are as well rounded product as the Toyota. So, there is very little competition that can stop the Innova from dominating the market in the near future too.