Maruti turns the heat on Hyundai’s blockbuster Elite i20 with the brand new Baleno hatchback. This time round the well packaged Maruti Suzuki Baleno seems ready for the job at hand 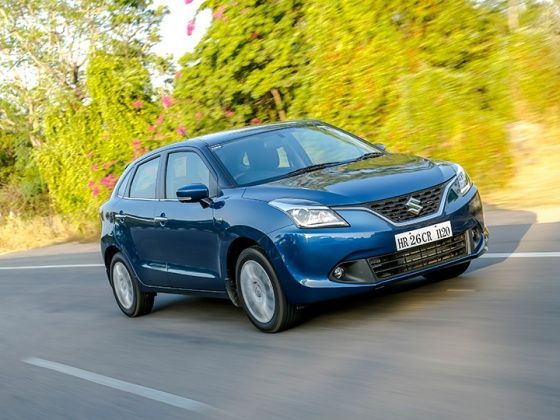 Maruti Suzuki Baleno is back. And this time the Baleno nametag will be seen on the boot of a new hatchback, unlike the previous model which was a Honda City-rivalling executive sedan. Maruti has been losing potential car buyers who, having no choice from Maruti, upgraded from the Swift to Hyundai's hugely successful Elite i20. Now with the Maruti Suzuki Baleno, the company has its eyes firmly on the premium hatchback segment. This will be the second product to be sold from the Maruti's exclusive Nexa Experience showrooms which currently sell the Maruti Suzuki S-Cross.

Lighting up the midnight sky with a spectacular display of firecrackers at a grand event in Jaipur, Maruti Suzuki officially opened bookings for the Baleno nationwide, with the official launch slated for October 26. Since the Baleno will be made in India, the new Maruti hatchback will first be sold in the Indian market, and would be later exported to over 100 international markets. So, we’re here in the Pink City driving the new car, much before international media gets their hands on it. A good feeling, this.

In terms of design, the Maruti Baleno doesn’t really stand out from its peers, and seems like an evolution of the Swift. Maruti Suzuki has been rather conservative on the styling front, with soft lines and smooth corners everywhere - nothing too futuristic or any outrageous attempts to be drastically different from what’s available in the market with this car. Design being a personal thing, Maruti’s new Liquid Flow might appeal to several of the existing Swift buyers, and am sure many would be tempted to trade up to the larger Baleno.

The top variant we drove came with stylish projector headlights, with LED day time running lights and a smart silver strip which merges with a chrome strip on the grille. The design of the headlights, however, are reminiscence of the Swift. As expected, in profile, there are no sharp lines or shoulder jutting out, but the larger proportions of the Baleno make it more impactful than its smaller sibling overall. Unfortunately, just the top spec models get fancier 16 inch alloys wheels, while the rest make do with basic 15-inch steel wheels. Maruti has tried to make the rear of the car more interesting by placing a solid chrome strip on the boot, and higher variants also get a sporty roof spoiler. In all there are seven colours to choose from including a trendy Autumn Orange, Ray Blue, Pearl Arctic White, Granite Gray, Fire Red, Premium Urban Blue and Metallic Premium Silver.

Honestly, I wasn’t very impressed with the interior when I first saw it at the Frankfurt Motor Show last month. And Maruti executives confirmed that the cars given to us in India are closer to production, which explains why it seems a lot more likeable now. The smart all-black cabin looks upmarket and sporty, but there are plenty of parts carried forward from other Maruti Suzuki models, which steals some of the freshness away. We expected the premium-positioned Baleno to use some soft plastic parts on the dashboard and maybe leather upholstery options, which could have made the cabin even better. Apart from this there’s not much to complain about, as the fit and finish is pretty decent for the segment.

The front seats are large, comfortable and well bolstered. Thankfully, the driver’s seat is height-adjustable, which helps get a good driving position. In fact, the tilt and reach adjustable steering further helps this cause. The icing on the cake is the positioning of the switches and buttons, all of which are well within reach, making the cabin ergonomically sound.

As desired in this segment, the cabin is spacious and there’s plenty of space at the back too. What’s most impressive is the excellent knee room for the rear seat passengers - something Maruti car buyers were always left desiring more for until now. India being a predominantly chauffeur-driven country, this will not go unnoticed. There’s a spacious boot too, with a very useable 339 litres of storage space.

One of the keys to succeed in this segment is to offer plenty of features and driver aids, and Maruti has ensured that the Baleno doesn't skimp on this front by loading it with some of the latest gadgets you can think of. So higher models gets climate control, colour TFT information screen, a 4.2-inch touch screen with a rear parking camera and satellite navigation system, and segment-first Apple CarPlay which, by the way, is a really cool feature. Apart from this, there are also steering-mounted controls, keyless entry, push button start, USB and AUX ports, and special coating on the glass which prevents UV rays from entering the cabin. Also commendable are the safety features such as ABS, EBD and dual airbags which are offered as standard on all variants.

Despite the premium position, the Baleno has to be priced competitively in India for it to make any kind of dent in the market. So, it won't come as a surprise that the Baleno borrows the Maruti Suzuki Swift's engine to keep costs down. Not that we're complaining about it, though. The petrol engine in the Baleno is a very refined 1.2-litre VVT motor producing 85PS and 115Nm, offered with a 5-speed manual. It is also the first hatchback by Maruti Suzuki in India which comes with a CVT option.

Surprisingly, the Baleno petrol CVT is only offered in the second rung Delta trim. This means it loses out on features like DRLs, chrome handles, alloys wheels, touchscreen, Apple CarPlay, TFT cluster among others. So, expect a top-spec Maruti Baleno CVT Alpha variant in the near future. The automatic or Baleno CVT is impressively quick off the line and cut out for city use, but runs out of steam on open roads. The other issue with the automatic Baleno is that, while overtaking, the engine is continuously close to the redline and the ensuing strain can be heard even inside the car.

The diesel continues to be the tried and tested 1.3-litre DDiS 190 motor, good for 75PS and 190Nm. Yes, we were all expecting a 90PS oil-burner, but maybe Maruti is keeping that for a sportier variant of the Baleno which might be launched later on. For now there’s no automatic gearbox option in diesel either. The 75PS becomes just another number, as one starts to drive the Baleno diesel. The benefits of power to weight ratio and healthy torque of 190Nm come to the rescue. It effortlessly touches the 150kmph mark and makes for a comfortable tourer. This one is more fun to drive and absolutely loves the highway.

The Baleno is an international model for Suzuki and is based on an all-new platform, which will underpin future Maruti models including the next generation Swift. In spite of being larger than the current Swift, the Baleno is 100kg lighter and said to be 10 per cent stronger. This not just helps it meet the stringent European safety norms, but also offers excellent power to weight ratio.

The ride quality of the new Baleno is far superior to any of the recent models launched by Maruti Suzuki in India. In fact, we could go so far as to say that it is probably the best. It rides with a certain poise and confidence, and seemed extremely surefooted on the Jaipur highway. The steering is light and reasonably communicative, more in tune for city use. It’s a large car, but there’s hardly any bodyroll or wallowing. Brakes, too, are good for their job, with ABS and EBD ensuring it stops quickly and safely.

The Maruti Suzuki Baleno is one of the most efficient in the segment, with petrol claiming a mileage of 21.4kmpl and the diesel boasting of being the best in the segment with a claimed 27.39kmpl. Coming to price, Maruti says that the Baleno already has over 98 per cent localisation. This would translate into pretty competitive pricing. My gut feeling says that Maruti will be looking at undercutting the price of the segment leader Hyundai Elite i20 which is priced from Rs 5.34 lakh for the base petrol to Rs 8.28 lakh for the top of the line diesel variant. And if the new Maruti Suzuki Baleno manages to do that, then the segment could get a new leader.