First Drive: Electric Tata Nexon - 8 Things You Should Know Before Buying One! 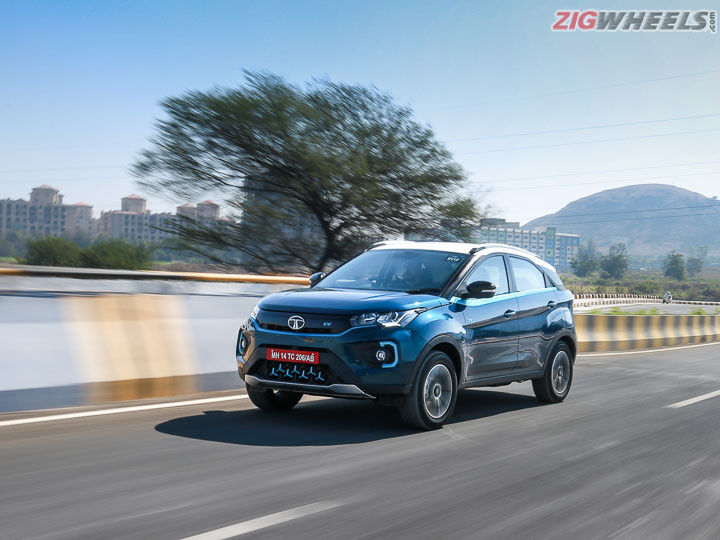 The Nexon’s design has stood out since Day One. However, its swoopy silhouette was more sexy crossover than sturdy SUV. Now, the EV redraws the balance by putting on a brave new face to create a more SUV-like demeanour.

The curved, organic lines have been replaced by angular ones that are embodied by the slim headlamps. As a result, the hood is new too - the peeled back design giving way to a clamshell unit. Actually, everything is new here, from the partly covered grille to the chiselled bumper. The blue-coloured stars that form the mesh for the air dam was a cool highlight.

The newness factor wavers as you look further back. On the sides, aside from the new and lighter alloy-wheels, nothing has changed. And talking of the rear, the forked LED elements in the tail lamp and angular DNA of the bumper adds some freshness here too.

Now your friends may suggest that the EV, aside from the badges on the fenders and the ZIPTRON badge on the boot, isn’t distinguishable from the upcoming Nexon facelift. But they’d be wrong as the blue accents applied to the garnishes under the grille, around the fog lamps, on the air dams, the sash under the window line and on the boot will be hard for anyone to miss. In case you were wondering, the CCS2 charging port is located where the fuel filler would usually be.

2) Most practical sub-4 (despite electrification) SUV!

The Nexon’s balance of ride comfort, backseat space, and boot space have made it a fantastic pick as the family car. The EV has managed to retain these values. The floor height for the rear bench and the 350 litre boot space is unchanged. This has been achieved by packing the 30.2kWh batteries underneath the car, resulting in a 4mm drop in ground clearance to a still healthy 205mm.

The desirability quotient has been upped with the introduction of a sunroof and leatherette upholstery on the new XZ+ Lux variant. Coolness is standard as the Nexon borrows its flat-bottomed steering wheel and the 7-inch colour display for the MID from the Altroz. The MID reads out battery State of Charge, estimated range, realtime power consumption and even shows the energy flow on a diagram. Keyless entry and push-button start, automatic air-conditioning, and connected car technology are available from the base XM variant.

There are other fine tweaks like a new finish for the dashboard, blue accents for the “green” factor, and the use of the drive mode selector as the selector for Park, Drive, Reverse and Neutral.

Has Tata pulled off a Porsche? As per Tata, the Nexon EV does  0-100kph in 9.9 seconds. However, in our VBOX tests, the Nexon EV clocked a best time of 9.48 seconds. Slotted into Sport mode with all 245Nm of torque on offer, the Nexon charged off the line without any drama. The 129PS took us to the 120kmph mark without any fuss. There was just a hint of vibration during hard acceleration, which faded away after a speed range. Tata Nexon EV Price

For reference, the fastest time we have recorded of any SUV in this range is 9.51seconds with the 1.5 turbo-petrol and DCT equipped Kia Seltos. But we aren’t declaring the Nexon EV as the speediest SUV under Rs 20 Lakh just yet because the test wasn’t as per our usual standards. For starters, we had two occupants and luggage weighing the Nexon down. And, the test location wasn’t our usual spot. So, for now, the Nexon EV has shown that it can claim the crown, and we’ll let you know the verdict once we get it for a complete test.

4. Better than any automatic you have used!

The Nexon EV leverages its EV hardware to tweak the “ABC” of driving a car. Automatics take away the hassle of clutch work and the Nexon EV goes one step further by reducing the use of the brakes! In stop-go traffic, the brake energy regeneration system works with dedication - slowing you down significantly when you lift off the accelerator, and creating electricity to charge the batteries. The system is intelligent enough to adapt as per the speed and gradient of the road, so that on highways or inclines it is gentle, but on downslopes, it could be more aggressive. This system maximises efficiency and convenience without requiring any extra effort from the driver. Cool!

So, the Nexon EV is quick to accelerate, but it has a limitation - it’s top speed. 120kmph. Yep. That can be a bit of a buzzkill, given its cracking performance. However, for most people the 120kmph limit won’t be a bother as on the road, the usability is not hampered. On highways, you can cruise comfortably at 80-100kmph and it doesn’t feel strained at 120kmph either. Tata says it has done this to maintain battery performance.

It is assumed that electrics will be quiet, and they are, but the finesse levels vary. The Nexon EV hits the right spot, as tyre roar and road noise are kept firmly out.  New materials for sound insulation ensure that driving the Nexon EV, despite the light wind noise from the A-pillar, is truly serene.

The suspension deserves credit for this too. The Nexon EV weighs around 120kg more than the ICE versions. Also, the location of the batteries has pushed the centre of gravity down by 40mm and moved the weight bias rearwards. This has required an exhaustive revamp of the suspension. The result, thankfully, is a cushy setup that is apt for everyday use even over our bumpy and broken city roads. At highway speeds, there is just a hint of softness when going over bumps, but that doesn’t dim the Nexon’s confidence and sure-footed nature.

7. It won’t electrocute you.

Worried about waterlogged roads? The Nexon EV might just be better at tackling those than the ICE versions. How so? First, Tata claims at 300mm, the water wading ability is unchanged from the regular Nexon. Also, the battery pack and motor are IP67 rated, which means they can sit under 1 metre of water for half an hour without sweating. That translates to, based on the height of the batteries, 4.5 feet of water. You would do well to abandon your car, any car, before the water level gets there. Aside from this, the system has built in strategies to cut off power if there were to be a short-circuit anywhere.

8. The Range: Only car in the family?

We decided to test the Nexon EV’s 312km claimed range from the seat of our pants. Loaded with three occupants, luggage and subjected to hard acceleration for the performance tests, this wouldn’t qualify as a proper test. We even wandered out onto the expressway along with city use. This test is an indicator of the least you can expect, not the most. You can read more about the torture test here.

We saw the range deplete quicker at highway speeds.  In the city, the charge depleted much slower as the electric motor’s efficient nature wasn’t taxed by wind resistance. Also, regenerative braking helped top up batteries and extend range too. At the end of the day, the Nexon EV dropped to 8 per cent charge from 95 per cent, having travelled 165km. At the start of the day, the on-board computer had predicted 237km to zero. So it is with a fair bit of confidence we expect the Nexon EV to return over 200kms of range in city conditions.

Tata claims a 0-80 per cent charge time of sixty minutes using a DC fast-charger. Using the 15 Amp charge cable bundled with the car, the Nexon will go from 20-100 per cent charge in 8 hours. So, until public charging infrastructure develops further, the Nexon EV would make for an excellent city runabout or the second car in the family.

The Nexon EV makes the leap that we have been awaiting from Tata Motors. It is appealing and polished, no ifs and buts. The plastics felt good and the finish was consistent too. Everything worked as expected, if not better. The only niggles we could find was that in sunlight, we couldn’t see which mode was selected on the drive mode selector because of the weak backlight. A 300km real-world range and a higher top-speed would have cemented the Nexon as the EV to beat. The Nexon EV is expected to be priced between Rs 15 lakh to Rs 17 lakh, but state government subsidies and rebates would bring it in line with its ICE-equipped siblings and in a position to make EVs the new normal.

Read our thoughts on its pricing here.