Calling the brand spanking new C-Class the baby S-Class is a huge promise, especially given the strides that the flagship has made. To keep its customers from straying towards its younger and fitter competitors, the new C-Class would have to be more luxurious. But, in my immature mind, the S-Class tag is a double-edged sword, and that raises a few concerns and queries. Can it deliver on that promise? And should it? After all, the OG baby of the Mercedes family has a certain appeal which is best enjoyed from the front-right corner. So.. 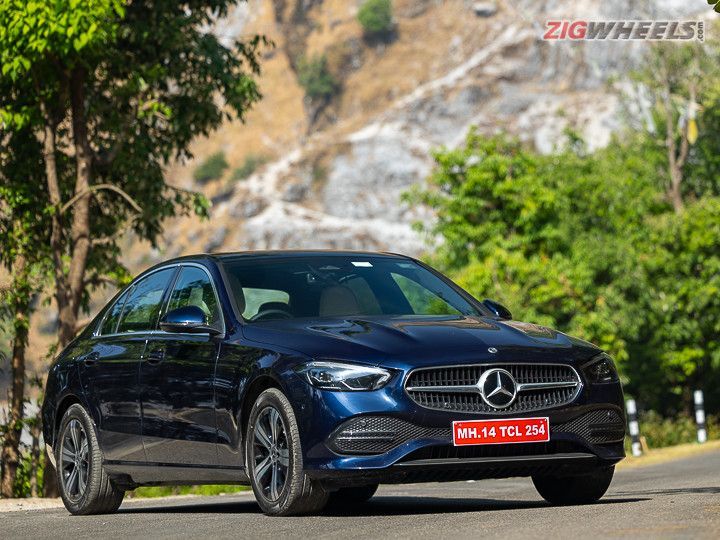 Looking at the Avantgarde spec C200 head-on I’m sure you can see why it’s called the baby S-Class. However, if it were the C300d standing there you would be reminded of the E-Class, which is sweeter still in my books. That’s down to the frameless trapezoidal grille downturned lips look, giving it a meaner look compared to the puckered hexagonal grille on the Avantgarde.

The AMG Line on the C300d adds cooler looking front bumpers too. These have more aggressive air dams which almost point out how staid the Avantgarde’s bow-tie design is. The AMG Line also wears flanged rims that look more aerodynamic and, at 18 inches, are a size larger too. Also, the flared side sills give the model a bit more swag.

These differences aside, both models share the core DNA which is built on a highly altered version of the MRA II platform that debuted on the S-Class. As a result, the new C-Class’ dimensions have grown on all fronts, except for the height and now, the stance is more fluid and purposeful. The rear is tied up in Mercedes’ signature look, but there's a clay-like smoothness that contrasts with the sharpness of the tail lamp design. For the record, the C-Class’ overall length has increased by 65mm, width by 10mm and the wheelbase has been stretched by 25mm. That last bit is excellent news!

The backseat is the place that could shatter the C’s big promise. To date, no C-Class owner could have asked his full-grown loved ones to get into the rear seat without offering a kind of apology. C-ramped. Well, not anymore. Not any more. This Mercedes should be as good as its rivals now, as 21mm of legroom has been added to the rear and there’s 15mm of added shoulder room, while the panoramic sunroof makes the cabin feel airy too.

Quite simply, a six-footer could be accommodated in reasonable comfort as there’s more headroom too, while smaller passengers would be at ease here. Keeping longer journeys in mind, the slightly low slung stance does make you wish for more under-thigh support though. It’s not a three-in-the-back kind of car either, the cabin is only 15mm wider. Also, it’s still a rear-drive machine (God Bless it), which means the transmission tunnel is very much an issue for the middle occupant.

Equipment-wise the C packs sun blinds, rear air-con vents, an armrest with integrated phone and cup holders. The beautifully sculpted seats are optionally available in the sienna brown shade, which is also derived from the S-Class. As for USB ports, they are in the storage space under the armrest. So not classy. However, if you are looking for a higher S-Class quotient, do step into the front.

It’s in the front that the C goes all out to bowl you over. The dashboard just looks smashing! It’s a close clone of the S-Class with the striped wood for the crash pad on the dash! The squaricle air-con vents are much larger, super-cool-looking and work with a click that is just so satisfying. The centrepiece of the wow experience is unlocked by the MBUX system that is dished out by the tablet-like 11.9-inch touchscreen system. The Baby Benz gets the latest NTG7 version of the MBUX which has been featured only on the S-Class and Maybach till now.

The interface looks rich and unique and feels very snappy to use. The C-Class also features driver profiles that can help you configure your seat position depending on your height. It can then store the seat position, air-con settings, the sunshade position and sound settings too. A fingerprint sensor is used to authenticate the user to activate the profile with one quick touch.

The new swipe style control to operate the sunroof are very convenient too. It worked flawlessly every time and lets you easily and intuitively adjust it too. There are hordes of capacitive touch buttons across the cabin - from the steering wheel, to even on the door pad, for adjusting the ORVMs.

While the C-Class does bowl you over at first, you eventually notice a few well-hidden misses. The lower half of the dash uses plastics that feel quite tough, in contrast to the soft and rich feeling materials elsewhere. Also, the absence of ventilated seats and a 360-degree camera can easily be justified by its absence on competing products too. While it doesn't offer ADAS tech the C packs 7 airbags Active Brake Assist and Active Park Assist to help you on the road.

At launch, Mercedes will offer the C-class with three engines. There's the C-300 D in the AMG Line, while the Avantgarde line has C220 diesel, which for the first time gets mild-hybrid tech. While the mild-hybrid tech promises to improve the performance, Mercedes has also overhauled the engine and it now has 1998cc of displacement compared to 1950cc earlier; all thanks to a new crankshaft for a longer stroke. As a result, the power count has climbed from the 190s and hit the 200PS mark now.

However, the car we drove was the C200 petrol, which was already offered with the 48-volt architecture in the previous generation of the C-Class. This 1.5-litre four-cylinder engine has been upgraded too. It now boasts of a twin-scroll turbocharger that Mercedes claims to have co-developed with the Mercedes-AMG Petronas Formula 1 team! A host of friction reduction technologies also help the engine deliver 204PS of power. It is worth noting that the mild hybrid has also been uprated as it delivers 20PS of power and 200 Nm of torque, up from 14PS and 160Nm. The motor steps in when it needs to give that added dash of torque and just typically at low speeds to make it that much more effortless and efficient.

This engine has a clear flavour and likes to keep things classy. Right from standstill, it impresses with its refinement; you just can’t feel it startup. Even as speeds rise, the interaction between the electric and the ICE power systems is seamless, invisible and effective. Keeping pace with city traffic will not be a bother here. As you drive around you realise that it is smooth, and capable and tempts you to do things calmly.

The luxury quotient bumped up the sense of being cocooned in the cabin, which helps make this baby Merc feel quite grown up too! This feeling is highlighted again when compared to the old C-Class’ suspension which had a firm ride; whereas the new C feels supple and plush. It doesn't thunk or crash over rough sections too. Overall it feels like a car that you could relax in and would enjoy taking it easy in as well.

Can being like an S-Class be a bad thing? In my immature mind, it could! The S-Class is about the backseat, luxury and decadence. However, the Baby Benz with its smaller footprint can offer big excitement for the person behind the wheel in a way the S-Class can’t! So, does the C-Class deliver?

Ding! A bell rings happily in my head as we wind our way around the twisty mountain roads of Mussoorie. The new chassis is the one that makes that bell ring as I hustle the C. There is a sense of tautness and confidence in the chassis that is egging me to go faster. While the tyre size is unchanged, the C-Class has a wider footprint now, with increased track front and rear which helps it here.

Yes, the comfort-oriented suspension takes away some of the immediacy, you still feel connected to the road and the mechanisms in between. Yes, the steering could be quicker; and no, it doesn't get rear-axle steering or adaptive suspension. In Sport mode it's the drivetrain that changes its attitude, holding onto a gear for longer, and offers a greater sense of urgency.

The handling is enjoyable enough that you start making demands from the four-pot petrol. Prodded with a heavy foot the engine can be brisk, but I wouldn't call it out-and-out exciting. More importantly, it needs a better connection between the go-fast pedal and the engine, as there is some lag and a disconnect in the way the turbos and engine respond to demanding inputs. Part of the blame has to be shouldered by the laid-back 9-speed gearbox which slows down the 204 horses. The financially enabled enthusiasts could, and should, look at the diesel options instead. The C300d with its 265PS of power and 550Nm of torque should complement the chassis much better.

So, my queries have been answered! As an enthusiast, the C-Class’ chassis will tempt me into the driver's seat more often. And as for the S-Class tag, it's not just a marketing gimmick. The Baby Benz feels expensive on the inside, and it will feel luxurious in the way it transports its occupants. But, there is still a bit of conflict in me;  the inner enthusiast wants the chassis to be experienced with a stronger engine, which has me itching to get behind the wheel of the C300d.

The nitpicker in me feels the S-Class tag deserves richer materials even on the lower portion of the dash and a longer features list too; with ventilated seats being right on top of my list. In terms of pricing the previous gen was already priced upward of Rs 50 Lakh (ex-showroom), which means, when launched on the 10th of May, the new C-Class is likely to be priced in the Rs 55-65 Lakh range. Pricey? Maybe. Desirable? For sure.